Everything I Learned About Love I Learned From a Cavewoman

I was twelve when I discovered Jean M. Auel’s Earth’s Children series on my grandmother’s bookshelf. She was a reader of legal dramas, so most of her books were black and austere, with gavels or bloody fingerprints on the cover. It was a thrill to find something that featured a living woman: a statuesque blonde gripping a spear and gazing off into some mythic distance.

Like a lot of girls, I was drawn to pretty, dreamy things. But I was also a tomboy who’d spent elementary school chewing Copenhagen, stuffing my hair up in a denim hat, and kicking boys in the balls. This made Ayla—the Cro-Magnon heroine of the novels—doubly compelling. She was a Cave Barbie who could rock a wolf-hide minidress just as easily as she could trap, kill, and eat a wild horse. And she was a survivor. In The Clan of the Cave Bear, the first (and arguably best) book in the series, she uses her wits to overcome rape and rejection at the hands of her adoptive Neanderthals.

But if I’m being honest, I mostly endured the triumph-of-the-human-spirit stuff. It wasn’t until the series abandoned all literary pretense and became a batshit crazy romance that I got hooked.

As The Valley of Horses opens, our heroine is exiled in a remote cave. She’s depressed, but keeps busy inventing things: shampoo, birth control, the ability to start fire, the domestication of animals (first a horse, then a cave lion). One idle afternoon, she prophesies the industrial revolution. And yet she longs for a human companion. Sometimes when she watches horses mating in the distance, she feels a mysterious pulsing in her loins…

Meanwhile a hot caveman named Jondalar is traveling east, brooding over his destiny, having tender but unsatisfying sex with virgins. This is his job, for some reason—to “open” virgins—even though his dong is so big that women cower when they see it. (The books prefer “manhood,” but if you’re familiar with the bland and doofy Jondalar, you’ll agree that “dong” is most apt). As much as he enjoys deflowering cave-maidens, Jondalar is tired of being careful. He wants to get balls-deep. Too bad no woman alive can accommodate his enormous size…

Wait, the reader thinks against her will. Wasn’t Ayla brutally raped by a Neanderthal starting at age seven? And didn’t she give birth to a big-headed mutant baby at eleven? Does this mean she has, like, a supersized hoo-ha?

Ayla—the Cro-Magnon heroine of the novels—was doubly compelling. She was a Cave Barbie who could rock a wolf-hide minidress just as easily as she could trap, kill, and eat a wild horse. And she was a survivor.

Never mind that vaginas don’t work that way. Never mind that we’ve read 500 pages of Ayla’s trauma only to learn it’s made her a great lay for some stupid flint-knapper from the east. Never mind that this is turning into a weirdly anatomical Cinderella story. We want to know: will Ayla’s hole fit Jondalar’s pole?

“Help us!” my mother shouted at me one afternoon. “There’s a fire!”

It was true: a fire had started near our trash barrel and spread across our backyard, where it now lapped, crackling, against the south side of the house.

From my place on the couch, I smelled smoke. I heard the hiss of the outdoor faucet and my little brother’s whoops. He loved fire, and was thrilled to battle one he hadn’t secretly lit. Together he and my mother ran past the window, buckets of water sloshing against their legs.

“Okay. I just have to finish this chapter.”

I meant to get up. Truly, I did. But Jondalar’s dong was still traveling east, weaving through the chapters like a shark’s fin, and I couldn’t look away. Sex was coming for Ayla, just as it was coming for me, although I couldn’t imagine when or in what form. I knew only that things were changing.

I’d begun to develop what my grandmother called, ominously, “a figure.” Instead of racking boys, I’d begun loitering nonviolently in their presence, wondering if they liked me, wanting them to like me. I spent a lot of time thinking about a boy named Sergio’s lips. For his sake, I’d even considered taking off my hat and combing my hair—a thing I’d once fought like a wildcat to prevent. Like so much of adolescence this felt like a surrender, an inevitable giving in, and I didn’t understand what awaited me on the other side, or what could ever compensate me for my hat or my freedom or long summer days tramping through creek beds. What was I supposed to do with Sergio’s lips? What if I did it wrong, and he laughed at me? It was mortifying to consider. But if there was anyone more benighted than me, it was Ayla. She’d never even seen another human. Her journey into civilization held hope for mine.

On the coffee table behind me, the phone rang. I answered it absently, explaining that my mother couldn’t talk; she was putting out a fire.

“What fire?” my grandmother asked.

Alarmed, she called the fire department (a formality given how far we lived from town) and drove six miles to help extinguish the blaze. By the time she arrived, it was mostly out, just a few smoking clumps of grass in our blackened backyard. She found me unmoved, incurious about her arrival, deaf to her scolding. It was a story she’d tell for twenty years, as proof of my incredible laziness.

But there was hope in the story of Ayla and Jondalar, who, despite being beautiful visionaries, were also kind of morons. They gave me permission to be clueless, and a little bit primitive.

But in my defense, it takes Jondalar 400 pages to wander into Ayla’s valley. Once there, he gets mauled by her lion and dragged back to her cave to convalesce (the paleo version of Tinder). Now that two infatuated adults are alone and half-naked in a small space, you’d think they might realize their sexual destiny. But like any good romance, The Valley of Horses creates tension by keeping the characters apart, and Ayla and Jondalar must instead embark on a 100-page series of romantic blunders:

Overcome by Ayla’s beauty, Jondalar hazards a nipple tweak. Ayla walks away, confused as to why a grown man would touch her milk glands.

Twice Jondalar tries to help her with some domestic chore and gets so worked up he ejaculates behind a tree.

Once he gets so lost in thoughts of Ayla that he walks into a horse.

They go for a horseback ride so stimulating that Jondalar considers raping Ayla before a herd of bison walks by and “drains off a measure of his stifled ardor.” (Bison are the least sexy of the Ice Age Beasts.)

At last they kiss. Things are starting to heat up, when Ayla says, oh, have I mentioned I was raised by apemen and birthed a half-human baby who was taken from me and I’ll never stop grieving?

It goes on like this. Every time the pair comes together, some force—often Ayla’s awkwardness—pulls them apart. When they finally fall into the bed furs, Ayla doesn’t understand “mouth on mouth,” won’t take off her clothes, and analyzes at length the feeling of Jondalar’s tongue on her nipples. But, eventually, he shuts her up long enough to unveil his “prodigious manhood.” The reader is reminded of what a great disappointment cervixes have been to him in the past, and we rejoice as he buries himself fully in Ayla’s “throbbing passage.” Everybody climaxes together—the characters, the book, maybe even the reader, depending on the day / lighting / amount of privacy: “For an eternal instant, his deeper throatier cries rose in harmony with her breathless sobs repeating his name as paroxysms of inexpressible pleasure shuddered through them.”

Just as one leaves a martial arts movie wanting to roundhouse passing strangers, I left The Valley of Horses wanting a worshipful soulmate, or at least a crush to get me through math class. But there’s no place less romantic than a small-town Junior High school, with its gray lockers and smell of cafeteria gravy, and I had none of Ayla’s fairytale beauty. Still, I lingered by the drinking fountains, awaiting my destiny. I courted fate while sipping boxed milk. I tried to catch boys gazing at me in stunned awe, but none of them looked at me at all, unless it was to ask if I had two mosquito bites on my chest.

“Not that I know of,” I said, peering earnestly down my shirt. “Why?”

Their laughter was a puzzle. Everything about that year was. But there was hope in the story of Ayla and Jondalar, who, despite being beautiful visionaries, were also kind of morons. They gave me permission to be clueless, and a little bit primitive, with or without my kick-ass denim hat.

Amanda Rea's stories and essays have appeared in Harper's, Best American Mystery Stories, One Story, American Short Fiction, Freeman’s, The Missouri Review, The Kenyon Review, The Sun, Electric Literature's Recommended Reading, and elsewhere. She is recipient of a Rona Jaffe Foundation Writers Award in Fiction, a Pushcart Prize, and the William Peden Prize.

When Loneliness Leads to Sex Robots: A Study in Teledildonics 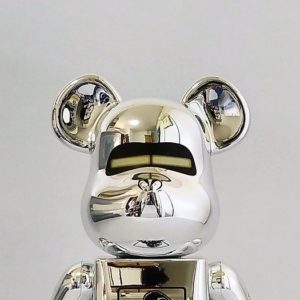 When Loneliness Leads to Sex Robots: A Study in Teledildonics In Spike Jonze’s cinematic masterpiece Her, a lonely writer is reconciling with his ex-wife when she discovers that he has been...
© LitHub
Back to top
Loading Comments...