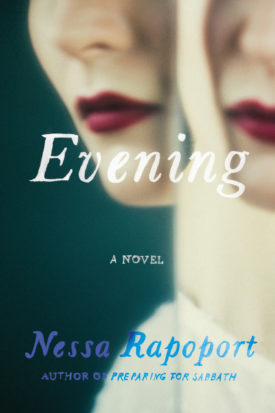 The following is excerpted from Nessa Rapoport's new novel, Evening. Rapoport is the author of a novel, Preparing for Sabbath, and a collection of prose poems, A Woman's Book of Grieving. Her memoir, House on the River, was awarded a grant by the Canada Council for the Arts. Her essays and reviews have appeared in The New York Times and the Los Angeles Times, among others. She lives in New York.

I am standing at the gravesite of my sister, dreaming of plums. The ripe, rose-colored ones with the blushing flesh within, the kind I would bite into greedily while Tam looked on, half appalled, half envious of my gluttony.

Beneath the soles of my boots, the unyielding cold of the ground punctures my summer reverie. For once, I have dressed like a grown-up, in a coat conservative enough for Tam’s wardrobe. As a result, my teeth are chattering in an exaggerated fashion and I cannot feel my feet. I want to wrap my arms around myself, but Ella, Tam’s daughter, is squeezing my gloved hand with insistent fingers.

Above, the sky has the blank look of imminent snow. I am enclosed by my family: My father in a stiff hat, towering over everyone; my mother at my side, crying so hard she does not know I’m here. Tam’s husband, Ben, is composed, a rebuke. In from Vancouver, my uncle Gil leans on Nana, who is erect as a monarch on an old coin.

There are scores of people, many from Tam’s television world, the adult life she created in Toronto. It is not tasteful to look around so avidly, but I do, despite the horror, the open rectangle before me.

I recognize some of Dad’s partners, crimped with empathy. I haven’t seen them in many years, but I know each face nonetheless, like a police illustration that heralds what someone who is missing will look like decades later. I can visualize the hall of offices on the way to my father’s, the blue ribbon of Lake Ontario in his window. In my mind I am still a child, running soundlessly down the pale carpeting to surprise him.

Now he is here, stricken. One of the men in tweed overcoats who surround him must have closed his office door to sit with Tam while she reviewed her will. She never would have left this world without one.

What secrets is she taking with her, I find myself wondering, as the dismayingly small box is lowered into the depths.

Tam had a secret drawer when we were children. The skull-and-bones warning on its face taunted me from the day she proclaimed that the drawer was forbidden to anyone in the family.

One summer evening, I waited until the upstairs was empty and tiptoed into her sanctuary. Tam’s curtains stirred faintly. Outside, my father was sliding the hose in a green arabesque across the lawn.

I dragged Tam’s desk chair to the dresser, my heart clattering. When I pulled its glinting handle, the secret drawer made a plaintive sound.

Below me, my mother was making her own kitchen sounds. I hoped I had calibrated the friction in the house precisely, with my parents in their separate principalities. When I would hear their voices rise in the crescendo they could not dampen, I’d dream of being invisible. First, I would be Eve, and then I’d simply dissolve, transparent Eve-molecules surveying their former domain in unassailable tranquility.

The light was already dim, but I could not admit my presence by turning on the lamp. For a minute I hesitated, imagining all too easily the purgatory to which Tam would consign me if she found me posed at her dresser. Then, as usual, my passion to know everything prevailed.

Peering over the lip of the open drawer, I saw only two treasures, positioned perfectly like every other object in her room. A purple felt whiskey bag, its gold drawstring tight. And a locked diary, whose key was inexplicably beside it.

There was something ferocious, spellbinding, in her relentless transcription of the mundane.

Unsurprisingly, the diary was the focus of my attention. Swiveling the tiny key to release the clasp, I eagerly turned the waxy, scented pages. What would I discover that would explain with finality not Tam’s secrets but the secret of Tam, the fascination she held for me in her orderliness, her certainty about what she wanted, and the discipline she could so easily summon to get it.

I read every page, yawning with tedium and yet compelled. There was something ferocious, spellbinding, in her relentless transcription of the mundane.

Today’s date had no writing. I fanned the future’s pages. Blank. Blank.

And then, isolated in capital letters: “EVE.”

I turned the page and squinted to read the lone sentence. “I know something Eve doesn’t know.”

Even when I splayed the last pages, the diary held no clue to help me decode her tantalizing prelude. Tam had verbalized the operating assumption of our lives.

I yanked open the mouth of the whiskey bag. In seconds I was coughing spasmodically from soap dust. Tam seemed to have saved every bar of soap Daddy had brought us from the hotel rooms of his European trips. Now they were disintegrating in her secret drawer. I jammed the diary’s clasp into the lock and shoved the drawer closed.

It was truly dark. My father must have come inside. I heard my mother’s annoyed rejoinders, while outside the sprinkler began its consoling night music. Then Tam was calling me to supper. I would have to enter the dining room’s abrupt light, guarding my own secret while all my feelings for her—devotion, guilt, and a confused yearning—lobbied me in competing percussion.

The first shovelful of earth knocks brutally on the wood of the coffin. My father has always set store by the uncompromising rituals of Jewish mourning. To participate in burial honors the dead. He straightens up and steps back from the edge.

I wish I could lift one of the shovels lying about for this purpose, move a single clot of earth from the raw mound to the grave, particularly when I see Nana wrestling with the metal handle, her white puffs of breath like an SOS in the crystalline air. No one tries to dissuade her.

Then Ella says, “Now, Daddy?” I look down to see her quite lyrically arch into the sky the rose Ben gives to her. Almost black, like a smudge of blood, it falls into the hole without a sound.

I bite my lip to prevent my whimpering. The wind has picked up, piercing my chest. The rims of my ears feel brittle. Arrhythmic thumps are having a strange effect inside my head. Now I know what people mean when they say the earth rushes up, I think idly. But I do not find out what fainting feels like, because Laurie grasps my arm, standing so firmly at my wilting side that I cannot fall.

The purity of the air has heightened my senses. I can smell Laurie’s skin, feel through my coat the nubby texture of his. Beside my feet are embossed leather wingtips, neatly aligned.

When I knew Laurie, he wore cowboy boots, fringed suede vests, and silk shirts I couldn’t wait to pull out of his jeans.

As the funeral ends, I remember the least predictable fact about him. Beneath the weathered denim, Laurie wore nothing.

The first time I undressed him, I had been more surprised by the immediacy of his nakedness than by the fact that my friendship with him seemed to have undergone spontaneous combustion. One moment he was Tam’s younger buddy, exemplar of Toronto’s provincial confidence. Then my startled face undid all the sophistication I’d affected to deter his interest. “Now look who’s provincial,” his bobbing penis seemed to say.

The boys I knew before Laurie wore white jockeys, and I would have bet money on Laurie as a white jockey guy.

I jump. It is Tam, exasperated by my discursion at her funeral on men’s underwear.

As if in divine affirmation, my eyes light on the tombstone ahead. There, in simple lettering, my great-aunt Nell’s name is inscribed. I thought she was buried somewhere in Arizona, where she’d lived in old age, but the family must have decided to bring her home.

Excerpted from Evening, copyright © 2020 by Nessa Rapoport. Reprinted by permission of Counterpoint Press.

Bryn Turnbull on the Woman Who Preceded Wallis Simpson 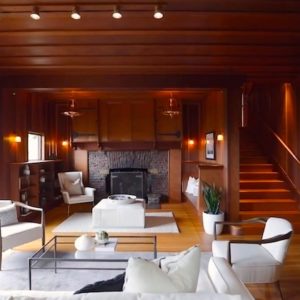 Take a virtual tour through Ursula K. Le Guin's gorgeous California home. If you want to understand the deep well of creativity author Ursula K. Le Guin drew from at a young age, you should probably...
© LitHub
Back to top