Why Can't We Sit Still and Listen for 20 Minutes?

This past winter, after longing to read it for years, I finally found time to finish Dostoyevsky’s Demons, the last of his major novels I hadn’t yet cracked. I was fascinated by the book’s climactic scene. In a novel chock full of the murder and revolution that had drawn me to it, the Russian master orchestrated for the book’s climax… a literary reading. Dostoyevsky had developed an open rivalry with Turgenev, and he used that scene to skewer a pretentious, fictionalized version of his rival by having his character give a miserably received reading from his work. The event culminates in this claim from Dostoyevsky’s narrator: “Generally I have observed that at a light, public literary reading, even the biggest genius cannot occupy the public with himself for more than 20 minutes with impunity.”

Prior to reading this scene, a suspicion had been growing in me. I’d just come off the road from almost a year of reading from my own debut novel at bookshops, colleges and universities, and at events I found myself reading less, talking more. As part of my day job, I run a prominent fiction and poetry reading series at a small college where I teach. In recent years I have hosted, attended or participated in dozens of literary events around the country where novelists have done the same thing I found myself doing: A novelist might read, say, one six-minute scene from her new novel, then talk about her research methods, her aesthetics, about the weather or politics. Take questions. Some cynical part of me began to feel this was a result of our distracted culture: long-form journalism presented next to estimated reading times, giving way to three-minute clips from television shows ready to play on our desktops, to infinitely repeating GIFs. The Internet, stealing our attention spans.

Now in Demons I’d discovered that in the 1870s, in Russia, in the most literary moment in human history—at the halfway point between when we all came out from under Gogol’s overcoat and when Chekhov introduced us to Anna and her lapdog—an audience couldn’t listen to a novelist for more than 20 minutes, either. In a year when audiobook sales hit historic highs, while eBook sales waned, the literary reading attendee still couldn’t be expected to sit and listen to the novelist for half an hour unless it was ushering him into the fourth mile of his jog.

For the poet the act of reading aloud might feel uncomplicated. Poetry is an oral form. But for the fiction writer the oral tradition is more uncertain. “Prose is not to be read aloud but to oneself alone at night,” the novelist Henry Green once wrote, “and it is not quick as poetry but rather a gathering web of insinuations which go further than names however shared can ever go.” Green wrote this before any contemporary novelist who hasn’t chosen the pen name “Ferrante” was expected to present herself at Powell’s Books, at Elliott Bay Book Co., at Brooklyn’s Greenlight Bookstore, to read from her new novel.

Some facts: I have read at Powell’s. I have read at Elliott Bay, and Greenlight, all in the last couple of months. I wanted to. I pushed the publicity department at my publisher to have me do so. I like reading aloud from my work. After almost eight years of working on a book, I wanted to get out into the world and talk to people about it. I wanted to stand behind a small podium. Before turning to writing and teaching full-time I worked part-time as a musician, and I missed the jolt of playing the last note of a song to applause. No one applauds the last sentence of a novel after it’s typed. The writer is alone in his room, at worst among strangers in a Starbucks.

Some competing facts: Reading at these bookstores was more something I was happy to have done than something I was happy to be doing. At times I looked out into a crowd of, say, 23 audience members (so not a “crowd”), and saw that many of them looked droopy-eyed. Bored even. Sometimes I have looked up in the middle of reading to find a listener or two quietly sneaking out the back of the room. I myself have been droopy-eyed and bored at readings. Sometimes this even happens before the 20 minutes Dostoyevsky allotted Turgenev 150 years ago.

“Even the biggest genius cannot occupy the public with himself for more than 20 minutes with impunity,” Dostoyevsky wrote, and when I first read it, it irked me. But in stepping back—back from the road, back to the serenity of sitting with the novel itself—I let my eye wander back up that page in Demons to the beginning of the scene. Dostoyevsky sets the scene by saying, “I declare beforehand: I bow down to the greatness of genius.” The genius he refers to is not reading aloud, but the novelist’s job: writing. The 20 minutes of attention we pay a writer at a reading haven’t changed. But neither has his actual genius. The instinct in the novelist to talk about his work rather than read from it is its own generosity: to save for the reader the essential interaction, when the latter is left alone with the book.

“Who could call a day spent reading a good day?” Annie Dillard once wrote. “But a life spent reading: that is a good life.” I’ll never get to hear Dostoyevsky read, or hear how he’d handle a Q and A (one fears not well!). I finally got my chance to read Demons in 2016. That was the point all along.

Daniel Torday is the author of The 12th Commandment, The Last Flight of Poxl West, and Boomer1. A two-time winner of the National Jewish Book Award for fiction and the Sami Rohr Choice Prize, Torday’s stories and essays have appeared in Tin House, The Paris Review, The Kenyon Review, and n+1, and have been honored by the Best American Short Stories and Best American Essays series. Torday is a Professor of Creative Writing at Bryn Mawr College.

Over the Plain Houses 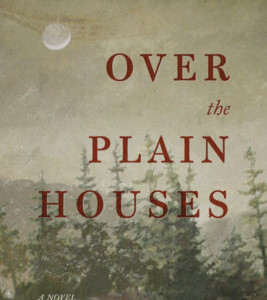 Over the Plain Houses

Irenie paused on the porch to listen. It was past midnight. She pulled shut the door and held her breath against the likely...
© LitHub
Back to top