"Nothing, of course, begins at the time you think it did."

November of last year launched America into one of the most terrifying eras in its history. Take a look around you. See the stark tone shift in journalism, the edginess introduced in the voice of artists, and the genuine fear in immigrant families, gay and lesbian and trans people, and basically anyone non-white. It turns out that it can happen here.

This past Monday, January 30, Paula Whyman and Mikail Iossel launched Scoundrel Time, a literary site dedicated to combatting the greed and evil of our new president. I asked Paula Whyman to take me through their ambitious and hopeful endeavor. More than anything I wanted to be convinced that any literary activism—really, anything at all—can work against such a looming catastrophe.

Jonathan Russell Clark: So this will be a less journalistic and more literary approach to living in the era of Trump. Can you explain what you envision for ST? How, for instance, a reader may find solace or solidarity there?

Paula Whyman: It may seem obvious, but there are things happening now that threaten all of us in ways that many Americans are not used to having to consider as realistic possibilities. This is not likely to change anytime soon. As a result, there is so much we’re being asked to pay attention to, so much we can’t ignore—to remain in denial is a great risk. In the face of that, I think art in its many forms can give voice to our concerns, hopes, fears, anxieties—and joys. In doing so, art can provide solace. It can spur engagement. It can increase understanding. It can help us feel less alone. We have a common language, the language of story. In a way, it all comes down to stories: whether they’re told through words or visually or otherwise, stories remind us of our humanity. And anything that can remind us of that essential quality we all share is crucial, in my view. It may seem strange to think we could forget our humanity, but of course we know from history that it’s possible. It’s happened many times.

Today there are forces trying their hardest to divide us. We can’t let it happen. We can’t make it through whatever is coming without each other.

Thomas Paine described the need for community in the context of building a house:

Four or five united would be able to raise a tolerable dwelling in the midst of a wilderness, but one man might labour out the common period of life without accomplishing any thing; when he had felled his timber he could not remove it, nor erect it after it was removed…

JRC: What will be your criteria for pieces published on ST?

PW: We’re looking for fiction, poetry, creative nonfiction, and visual art. Once we open to general submissions, which will happen later in January, we will have detailed guidelines on our site. But, in brief, our fiction editor, Karen Bender, is looking for stories that are honest and surprising, that can engage with the contemporary political situation in direct and indirect ways. Our poetry editor, Mark Svenvold, is seeking poetry that can challenge us to re-think what we thought we knew, that can open up what it means to develop a new poetry of engagement.

In all the genres, I would like to see work that addresses some aspect of the world we are now facing. It may describe a part of our humanity we don’t want to lose, or it could be a personal interpretation of what an artist is seeing and experiencing in his or her part of the country or the world. We are publishing work from artists all over the world, by the way; that is an important part of our mission.

I’m not thinking of Scoundrel Time necessarily as a place to rant without substance. The tone can be subtle, or it can be edgy. I favor work with a compelling voice, work that is both emotionally and intellectually engaging, clear-headed and down to earth, inventive but not for the sake of inventiveness. I’d love to see humor in any form. We need that more than ever.

JRC: What writers or publications of the past do you take inspiration from? Are there any precursors to ST? Or are these times special circumstances?

PW: These are special circumstances, for sure. I doubt I would be helping to found a new literary journal if we were not in our current situation, but I woke up the day after the election, like many people, in complete despair. I felt that there was no reason to write, nothing mattered anymore, certainly not fiction. I started researching real estate in Canada.

But of course fiction matters; it just took me a bit to clear my head and remember that. Now that the initial shock has worn off, I am getting back to work on my novel. And of course we shouldn’t leave; we should stay and fight for what’s important to us.

Grace Paley was one of the first short story writers I admired. I had the good fortune of meeting her back in 1998, when she came to read at my school. My favorite quote of hers for our current situation is this: “Let us go forth with fear and courage and rage to save the world.” We need to admit that full range emotions in order to make a difference.

Another quote I keep at my desk is from a Dylan song: “When something’s not right it’s wrong.”

When we first started working on this journal idea, our publisher Mikhail Iossel sent me a quote from John Ashbery that helps describe our purpose:

In the increasingly convincing darkness / The words become palpable…

The name of the journal, Scoundrel Time, comes from Lillian Hellman’s memoir of the same name, by the way. That book is, appropriately, about her experiences during the McCarthy era. There is a Hellman quote I keep at my desk as well:

Nothing, of course, begins at the time you think it did.

This to me is a reminder of a couple of things: that the problem we are faced with now didn’t just begin last year. There’s a path you can trace back and back. And, while many of us, almost all of us, are now feeling like targets, there are those in our country who have always been treated that way, who have lived with that for many, many years.

A poet friend of mine, Andrea Hollander, sent me a poem she wrote that contained an epigraph from Bertold Brecht:

We are going to keep singing.

JRC: How can art battle politics in this era of fake news and open hostility and fascist rhetoric?

PW: Art tells the truth. It’s that simple. Fiction, in particular, reveals the truth through fabrication. (Amy Bloom has been quoted as saying she’s never met a good fiction writer who was a bad liar.) We make things up, tell you that they’re made up, and yet, if we’re successful, readers find that the stories feel as real as life. Which is why just about every fiction writer I know has had readers ask if a story is true, if it’s autobiographical.

Disinformation, or propaganda (the real name for false “news”) is the inverse: it tries to pass itself off as true, seldom seems convincingly real, yet we are asked to believe it without question. It’s not artful; it’s not even a good con.

Art, on the other hand—we may disagree about the aesthetics, but you can’t fake art. People will know.

JRC: How did ST come about? What led you and Mikhail to set the gears into motion?

PW: It’s easy to be critical of Facebook, but there are good things that happen there, and one of those things has been a lot of organizing, a lot of sharing of ideas, a lot of fellowship. In fact, before I answer your question, I want to mention that we are going to have a page on the site called “Action,” run by a writer who is currently in charge of a FB group that posts daily actions, like phone calls about legislation, confirmation hearings, upcoming marches, etc. We hope this will become a place where people will look each day for ways that they can help.

The idea for the journal began with an informal post Mikhail made on FB, the suggestion to start a publication focused on fighting the darkness that seems to be descending. He asked if anyone was interested in working on such a project. I didn’t know Mikhail; we’ve never met in person. But I know that he does amazing work as founder and director of the international Summer Literary Seminars. I wanted to do something, but I had felt, like many of us, at a loss as to what would help, what would matter? I jumped at the idea. The journal seems like a logical extension of the kind of work I’ve been doing off and on for years. (I was an editor in various capacities for eight years before I got my MFA.)

If it’s cold outside, there are some people who know how to start a fire with only a twig and a stone. I don’t know how to do that (and probably I should learn). But the facts are damn cold right now, so I want to try and build a creative fire instead. And in artistic terms, we have considerably more than a twig and a rock at our disposal. Let’s see what happens.

JRC: What can people do to help Scoundrel Time?

PW: Scoundrel Time is a tax-exempt nonprofit, a 501(c)(3). That means we can accept tax-deductible donations, so please donate! We want to be able to pay our writers, not to mention the usual costs, like web-hosting, submission-tracking, and so on. 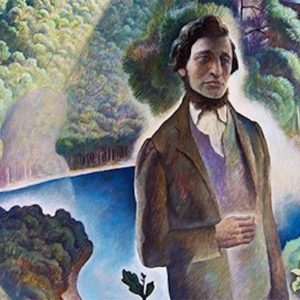 This interview comes from Open Source, a weekly program about arts, ideas and politics.  This year marks the 200th birthday...
© LitHub
Back to top