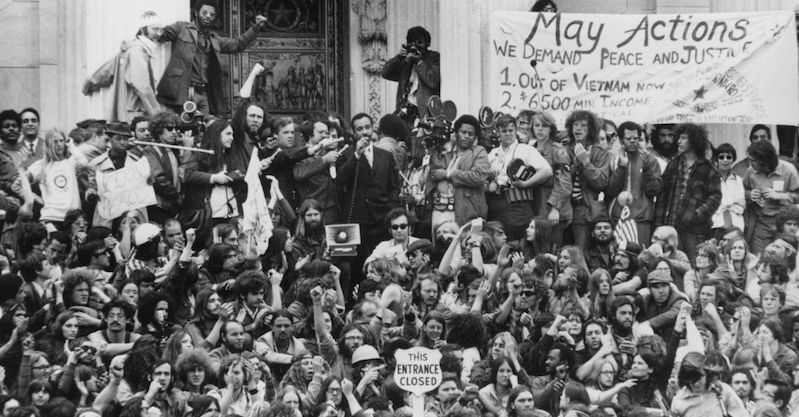 Lawrence Roberts on the 1971 May Day Protests

At daybreak on Saturday, May 1st, 1971, two helicopters banked over the monuments of Washington, DC, and hovered above the Potomac riverfront. The pilots relayed sobering news back to their superiors. It wasn’t long before Jerry Vernon Wilson, the city’s chief of police, left the downtown hotel room where he’d been sleeping all week. He headed to the Department of Justice for an emergency private meeting. There, he joined 11 men from Justice, the White House, the Pentagon, and the National Guard—the institutions most vested in preserving order on the streets of the capital.

For weeks, demonstrators had been flowing into Washington for marches, rallies, and sit-down protests, demanding an end to America’s war in Vietnam. The nonstop action had exhausted the government men, eroded their patience and their confidence. Now they worried about what was coming next.

Down by the placid blue-tinged river, a ragtag encampment was growing fast. Tens of thousands of young people were turning West Potomac Park into the staging area for the most zealous of the protests. When the workweek got underway on Monday morning, May 3rd, the militants, who called themselves the Mayday Tribe, planned to stream out of the park into the city, using their bodies and their cars to block bridges, traffic circles, and the approaches to government office buildings.

Deprive Washington of its workers, and the federal city would stall. Mayday’s leaders hoped this unprecedented show of public disaffection would raise the “spectre of social chaos,” knocking President Richard M. Nixon off course and forcing him to bring all the troops home from Southeast Asia.

Nothing about the protest was secret. The group published its order of battle in a 24-page tactical manual, distributed by the thousands and reprinted in underground newspapers. It displayed detailed maps and photographs of the targeted chokepoints, as well as tips for thwarting police. For months, posters with the Mayday motto had been pasted on walls and bulletin boards at hundreds of universities, coffeehouses, and bookstores across the country: “If the government won’t stop the war, we’ll stop the government.”

Despite more than six years of petitions, speeches, teach-ins, door-to-door organizing, electioneering, campus uprisings, and enormous parades for peace, the war was grinding on. Not only had Nixon failed to end the conflict as he promised when he ran for president in 1968, but he had expanded it—in secret, at first—by sending bombers and troops into Vietnam’s neighbors.

The U.S. invasion of Cambodia in 1970 had triggered a national student strike. Now Nixon’s latest incursion, into Laos, fueled the series of protests that its leaders had labeled the Spring Offensive.

May 1971 marked exactly ten years since President John F. Kennedy had dispatched a few hundred soldiers and advisers to South Vietnam, to prop up a regime besieged by a guerrilla force allied with the communist North. Kennedy’s successor, Lyndon B. Johnson, was initially skeptical of committing more resources to Indochina. “I don’t see what we can ever hope to get out of this,” LBJ, as he was known, privately told a key adviser. But one modest move in a Cold War chess match with the Soviet Union and China led to another, and then another.

Each month, tens of thousands of men age 18 to 26 were drafted into the army. By the time of Mayday, two million Americans had already served in uniform in Vietnam and returned. More than 275,000 U.S. troops still were deployed there. That was down from the peak reached under LBJ. But on Nixon’s watch, dozens were still dying in the jungle every week. Total U.S. combat deaths had just ticked past 45,000. Many more came home bearing terrible scars on hearts, minds, and bodies.

Hundreds of thousands of Vietnamese, Cambodians, and Laotians had lost their lives. American aircraft already had dropped more tons of explosives on Vietnam and its neighbors than had fallen on any place in history, and spewed more than 19 million gallons of defoliants and herbicides over millions of acres of greenery, in a vain attempt to cripple the enemy by stripping away its cover.

The conflict, with its mysterious battle lines and muddled military and political goals, so dominated headlines, the nightly news on TV, and debate on campuses and at kitchen tables that people in their teens and twenties could hardly remember a time when it hadn’t. The war had brought down LBJ and cost the Democrats the White House. The government’s new programs to combat poverty and injustice at home were being starved as billions of dollars poured abroad.

The war inflamed class, generational, and racial conflict that sometimes turned violent, even deadly. National Guardsmen had shot and killed four young people at Kent State University in Ohio during a demonstration against the 1970 Cambodia invasion. Police red into a Jackson State dormitory in Mississippi; two students died. When a crowd of student protesters in New York City tried to lower an American flag, construction workers stormed in and beat them bloody with their hardhats.

The most fanatical members of the campus-based movement known as the New Left had declared themselves revolutionary soldiers and disappeared underground. They began setting off bombs at a string of police stations, courthouses, banks, and at college buildings with connections to the military. Vietnam was a centrifugal force spinning the nation’s self-image faster and faster, and pieces were flying off.

The organizers of Mayday wagered that huge numbers of people opposed to the war were ready to escalate their tactics. At first, as the weekend approached, their camp on the field by the river was thinly settled. It resembled the bedraggled remains of a Civil War regiment. A few hundred people slept there on the ground, wrapped in blankets or sleeping bags. Most were young men, bearded and shaggy-haired.

The temperature sank into the forties at night and a cold breeze came off the river. Intermittent rain showers soaked their clothes and knapsacks. They reeked of smoke from wet rewood and marijuana. Some cobbled together lean-tos from tarps, rain ponchos, even American flags.

Informants walked among them—young police and federal agents, disguised in the worn green army-surplus field jackets favored by the peace movement, joining in the preliminary marches and the chants of “Stop the war!” and “Fuck the FBI!” They found the gathering less than impressive, predicting that in the end no more than five thousand hippies and radicals would show. One of Nixon’s top officials dismissed the boasts of the protest leaders as “just a lot of hot air.”

Yet by Saturday morning, as he stood in the conference room on the fourth floor of the Justice Department, Police Chief Jerry Wilson knew they’d misjudged Mayday. The incursion had swelled from a trickle to a flood. The helicopter surveillance confirmed that at least 40 thousand people had arrived so far.

Caravans of Volkswagen Beetles and microbuses continued to roll in from all over the country. Monday loomed as the largest act of mass civil disobedience the nation had ever seen, a coda to the most extraordinary season of dissent in Washington’s history. Nixon’s men were determined to make sure it failed. But how?

Excerpted from Mayday 1971: A White House at War, a Revolt in the Streets, and the Untold History of America’s Biggest Mass Arrest by Lawrence Roberts. Copyright © 2020 by Lawrence Roberts. Reprinted by permission of Houghton Mifflin Harcourt Publishing Company. All rights reserved.

Lawrence Roberts has been an investigative editor with ProPublica, the Washington Post, Bloomberg News, and the Huffington Post Investigative Fund. He was a leader on teams honored with three Pulitzer Prizes. Mayday 1971 is his first book.

Krista Tippett: Who Will We Be to Each Other After the Crisis? 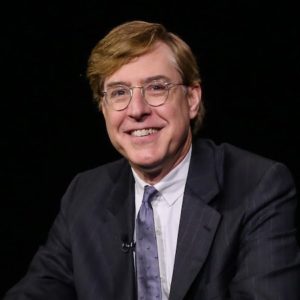