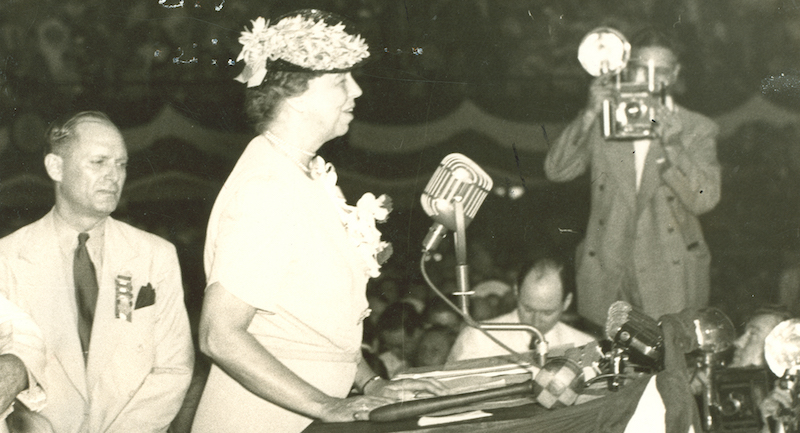 Eleanor Roosevelt: “Can a Woman Ever Be President of the United States?”

In the fall of 1932, when Eleanor Roosevelt was teaching American history at a high school for girls, editing a magazine called Babies—Just Babies, and helping her husband in the last weeks of his run for president of the United States by making a gazillion campaign stops—a speech here, a photograph there—the Associated Press assigned a political reporter named Lorena Hickok to follow her around. “She is, to use the expression of one of her friends,” Hickok wrote, “a whirlwind.” Roosevelt wore “ten-dollar dresses,” refused the protection of the Secret Service, borrowed friends’ cars so she could drive herself, and on Sundays scrambled the eggs herself, at the table, in a chafing dish. “THE DAME HAS ENORMOUS DIGNITY,” Hickok telegrammed the AP one day. “SHE’S A PERSON.”

That November, Franklin Delano Roosevelt won 42 out of 48 states in one of the most lopsided elections in American history. His wife celebrated, but she was a reluctant first lady. “Eleanor Roosevelt was a new phenomenon in America politics,” writes Blanche Wiesen Cook, Eleanor’s most exhaustive biographer. Born in New York in 1884, Eleanor Roosevelt was orphaned as a child. She married in 1905; FDR was her fifth cousin. The marriage was an unhappy one. In 1914, while ER was raising the couple’s six children, FDR began a passionate affair with his social secretary. Eleanor wanted a divorce; Franklin believed a divorce would ruin his career. They stayed together. She began regularly speaking in public in 1921, after he was struck with polio and she appeared in his stead. By the 1920s, she’d become a major figure in Democratic politics, just at a time when women were entering political parties. In 1920, with the ratification of the Nineteenth Amendment, the National American Women’s Suffrage Association reinvented itself as the League of Women Voters. “The only way to get things in this country is to find them on the inside of the political party,” said Carrie Chapman Catt. Roosevelt took that advice to heart, becoming a leader of the Women’s Division of the New York State Democratic Party while her husband campaigned and served as governor of the state. By 1928, she was head of the Women’s Division of the Democratic National Committee.

“What should a ‘first lady’ really do? Not host parties, she thought.”

Eleanor Roosevelt never wanted her husband to run for president. When he won, she told friends she might divorce him rather than lose her independence to the honorific role of first lady. “I shall have to work out my own salvation,” she said. She decided to reinvent the role. What should a “first lady” really do? Not host parties, she thought. She went on a national tour to crusade on behalf of women. She wrote a regular newspaper column. She became a champion of women’s rights and of civil rights (in support of racial equality, she was the most outspoken member of her husband’s administration). And she decided to write a book. She called it It’s Up to the Women. She announced her plan in January 1933, two months before her husband’s inauguration. “Mrs. Franklin D. Roosevelt, who has been one of the most active women in the country since her husband was elected President, is going to write a 40,000-word book between now and the March inauguration,” the Boston Globe announced. “Every word will be written by Mrs. Roosevelt herself.”

To say that Roosevelt’s act of writing this book was shocking hardly covers it. In 1933, women rarely spoke in public, held very few public of offices, and had barely begun voting. During one of FDR’s reelection campaigns, supporters of his opponent wore buttons that read, “We Don’t Want Eleanor Either.” And yet her own supporters were legion. In September 1933, reporter Rita S. Halle watched Eleanor Roosevelt at a conference about how to help the needy through the winter. The first lady told a story about an evicted family sleeping in a house with no windows against the rain, and the baby had gotten sick and died. Halle wrote of ER: “Despite a lithe, graceful figure, she is not beautiful. She does not charm by her personal appearance. Yet, as she spoke, the wearied audience uncurved its collective spine until, all over the large room, men and women were sitting forward on their chairs in intent response to the magnetism of her simple sincerity.”

That’s a fair account of It’s Up to the Women, too, with its earnest charm and flinty steadiness. In giving advice about getting through hard times, Roosevelt called on her study of the past. “There have been other great crises in our country and I think if we read our history carefully, we will find that the success of our nation in meeting them was very largely due to the women in those trying times,” she wrote. The Hartford Courant called it, accurately enough, “a book of general counsel and advice on pretty well everything, from dish-washing to high diplomacy.” In chapters on everything from what to cook for dinner to how to make a family budget (spend no more than 38 percent on food and 25 percent on rent), Roosevelt urged women to care for their children and their husbands but not to stint on taking care of business and thinking about politics. Vote, and get a job if you can, she told women. As for children who complain about their mothers working outside the home, and, equally, for husbands who might complain about their wives: “They have a right to expect that if they have a problem she will listen to it, but they have no right to expect that she will give up that which she loves and which is constructive and creative work, because they would like to have her home at five o’clock instead of at six o’clock.” The “really new deal for the people,” Roosevelt said, had to do with women awakening “to their civic duties.”

Reviews of the book ranged from politely dismissive to politely outraged. In a column titled “Mrs. Roosevelt’s Book,” the Christian Science Monitor called it “a wholesome, pleasant, kindly effort.” “Mrs. Roosevelt has always been an independent thinker,” the Chicago Tribune averred. “Her typewriter has developed no inhibitions since its journey to the White House.”

It’s Up to the Women was the first book Eleanor Roosevelt wrote. It would not be the last. She hammered at that typewriter, year after year, telling the story of her life and urging women to enter politics for decades before, at the end of her public life, she chaired JFK’s Commission on the Status of Women. “Can a woman ever be president of the United States?” she asked in an essay published in Cosmopolitan in 1935. Not soon, she thought. But someday. Meanwhile, there’s no end of important work to be done, by everyone.

Jill Lepore is the Kemper Professor of American History at Harvard and a staff writer at the New Yorker. 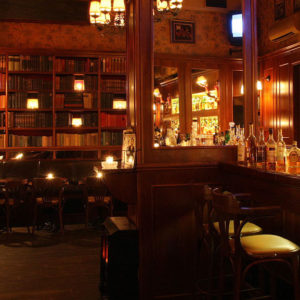 As you may have heard, this Saturday, April 29th, is Independent Bookstore Day, a literary holiday that will be celebrated...
© LitHub
Back to top
Loading Comments...