E. Jean Carroll on Trying to Control the Narrative Around Donald Trump

The What Do We Need Men For? Writer on The Maris Review

This week on The Maris Review, E. Jean Carroll joins Maris Kreizman to discuss her explosive new book, What Do We Need Men For?: A Modest Proposal, now available from St. Martin’s Press.

This episode was recorded at the 2019 Miami Book Fair.

E. Jean Carroll: I’d get out of the car, and I would ask people, “What do we need men for?” The answers were astonishing. First of all, everyone had an opinion. [laughs] It was great.

On trying to control the narrative about Trump:

Maris: Tell me about how you decided to come out with the revelation about Trump in the book?

Carroll: He was just on the list. I wrote down a list very quickly, and he was on the list, and when I got to him I wrote about it.

Maris: You did get to control the narrative a little bit more.

Carroll: Totally. Or at least what I thought. None of us can control anything. But I thought I could. If I could get it on the page and get it in print, and if I had it fact-checked not only by New York magazine but also the publisher of the book. Every fact was checked, which is important. Of course, we control nothing.

Maris: The other part of the book is that you have had some wonderful relationships and wonderful friendships. You harassed Roger Ailes.

Carroll: I harassed him every single day. I harassed that poor man up and down. If I saw him coming towards me down the hall, I’d say, “ROGER, MAKE A MUSCLE!” And he’d make a muscle. Or I’d say, “Roger, twirl. I like that suit.” We were very good friends. I teased him and teased him.

I had no idea. When I worked with him—he gave me a TV show, so of course I adored him—he was very much in love with Beth Tilson, who he later married. I didn’t see the Roger that everyone else saw. I saw the great leader, and I saw the man who basically took America and tore it.

That was Roger. Roger was the one who created the divide in this country, and I don’t know how we’re ever going to get it together again.

E. Jean Carroll writes the Ask E. Jean column in ELLE magazine. It is the longest, currently-running advice column in American publishing. Her new book is called What Do We Need Men For?

W.E.B. Du Bois in Paris: The Exhibition That Shattered Myths About Black America

Who Has the Right to Be a Writer? 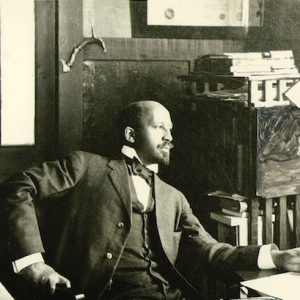 W.E.B. Du Bois in Paris: The Exhibition That Shattered Myths About Black America

At the turn of the 19th century, in the Americas, in Asia, and across Europe, the readily summoned image of the Black in the United...
© LitHub
Back to top