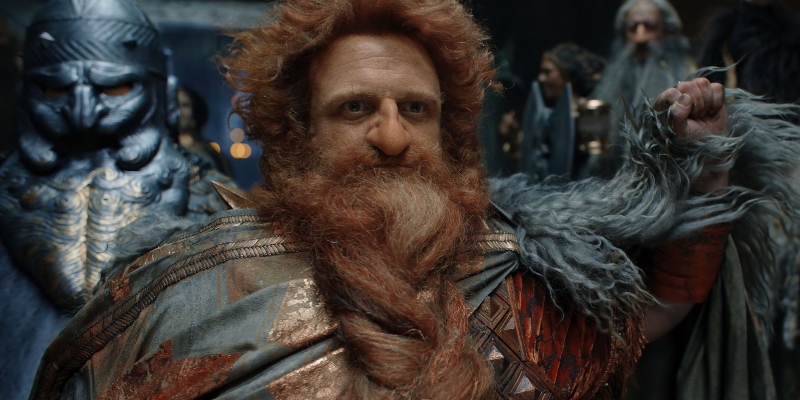 Dwarves, the Most Ill-Served of Jackson’s Hero Races, Get an Upgrade in The Rings of Power

Artist/Tolkien devotee Jenna Kass and TV Critic/fantasy philistine Dylan Roth are a married couple who have joined forces to review the new Amazon Prime original series The Lord of the Rings: The Rings of Power. Can this latest onscreen voyage to Middle-earth satisfy both a die-hard with the wisdom of the Eldar and your average Sam, Pip, or Merry?

DYLAN: This latest episode, “The Great Wave,” is a big improvement over last week’s. It moves along at a brisk clip, advancing three of our four ongoing storylines towards one another. Let’s start once again in Númenor, where Galadriel (Morfydd Clark) must convince the Queen Regent Míriel (Cynthia Addai-Robinson) to restore her nation’s alliance with the Elves and join the fight against Sauron.

This is the most invested I’ve been in Galadriel’s storyline so far, maybe because it sees her arrogance and presumption dashed against the rocks of Míriel’s actual authority. In order to champion her cause effectively, she has to acknowledge that other people have their own agendas and responsibilities, and that she can’t just glare and speechify her way to victory.

JENNA: Galadriel finally being taught politics by an otherwise Sir Not Appearing In This Episode Halbrand (Charlie Vickers) was actually pretty funny and kinda good? I’m still nursing some real displeasure over Galadriel of all people from Tolkien’s legendarium being written as a bull in a china shop, but it at least seems like they’re finally settling into and exploring the characterization.

Honestly, this whole episode (more or less) was an exercise in the show settling into itself. Did I grumble about the palantíri being “lost” and the one that’s left functioning pretty much exactly as the Orthanc stone in The Two Towers? Sure. Did I raise an eyebrow at Elrond explicitly giving the mostly-textually-correct tl;dr about Eärendil, which kinda contradicts some of the in-show lore they’ve set up? Yep. Did I roll my eyes at the inexplicably slow-mo chorus-accompanied chase through the woods by Arondir & Co? Oh boy, you betcha. But all this being true, I found myself genuinely engaged with almost all of it.

DYLAN: I’ve been looking for an opportunity to dig into some of the filmmaking choices in The Rings of Power, and that Arondir scene seems like my opening. I was quite invested in young Theo’s (Tyroe Muhafidin) efforts to sneak out of his orc-occupied village with much-needed food for the displaced humans holed up at the Elven watchtower. There’s a certain video gaminess (here used positively) to the long take of him sneaking around, carefully timing each of his moves for when the orcs’ backs are turned. It’s an effective tension-builder, and it’s also a very contemporary-feeling device, since complex long takes are much more common today than in the early 2000s thanks to modern previsualization techniques and the ability to seamlessly stitch together takes.

When Theo is caught, there’s a real sense of danger—but the moment Arondir arrives to rescue him, we snap into this slow-motion, reverb-soaked mode that feels totally at odds with the tension of the scene. We see this occasionally on The Rings of Power, presumably because Peter Jackson loved to slow down time and overdub echoing, elongated dialogue over scenes of shock or grief in his films. I have absolutely no idea why director Wayne Che Yip chooses to do this here, and it’s basically the only part of this week’s episode that bothers me.

Míriel is hands down the best bit of altered canon, and might be one of the best bits of the show overall.

While we’re on Arondir—and welcome back, Theo and Bronwyn (Nazanin Boniadi)—Arondir is Theo’s missing dad, right? There’s a reason that kid’s hair always covers the top of his ears.

JENNA: I’m not gonna touch that one for now, but please refer to my rictus grin. I’ll get into my feelings about it in detail if it turns out to be true, believe me.

In the meantime, I’m actually going to break from my curmudgeonly ways and say a nice thing: as of this episode, Míriel is hands down the best bit of altered canon, and might be one of the best bits of the show overall. Without going into it too much, the Tar-Míriel of the text was a tragic, agency-less figure. Though she was the heir of her father, Tar-Palantír, upon his death she was taken to wife by Ar-Pharazôn against her will, and then died.

The show’s Míriel is a complex and conflicted character, who I first wrote off with an “oh they made her evil I guess,” but who is actually a canny political player caught in the middle of a delicate web. Her counterpart, Chancellor Pharazôn (Trystan Gravelle), is a charismatic man of the people with callouses on his hands and the love of the working class—a very formidable potential rival, in short.

While I still think the tension around Galadriel’s arrival is fairly contrived (If you didn’t want her here, were just going to let her go, and she specifically asked in her first audience to go, why did you keep her around? Because she needed to find the Plot Clue?), the events leading up to her departure are compelling.

Honestly, apart from the Isildur stuff, which has consistently felt pretty meaningless, this episode choosing to anchor itself on Númenor has paid off handsomely. They even used the opportunity to establish coherent themes! Fathers and the expectations thereof, fear and faith, the burdens of leadership. Themes, baby!

DYLAN: That feels like a good transition into the episode’s third plot line, in which we catch up with Elrond (Robert Aramayo), Prince Durin (Owain Arthur), and Princess Disa (Sophia Nomvete) in the dwarven city of Khazad-dûm. The friendship between Elrond and Durin is an obvious attempt to recapture the fun of Legolas and Gimli’s relationship from The Lord of the Rings, and boy, is it working. This episode provides such a clear picture of what these people see in each other and how they get under each other’s skin.

Honestly, this whole episode (more or less) was an exercise in the show settling into itself.

I get much more of a warm family feeling out of the Khazad-dûm storyline than I do from the business with the Harfoots, whose absence this week didn’t bother me in the slightest. It’s so important to get to know characters in contexts other than peril and plot, and Elrond, Durin, and Disa are afforded time to just be people. It’s no wonder the episodes from which they’re missing have, so far, been the weakest.

JENNA: I love what they’re doing with the dwarves, which in my opinion might have been Jackson’s most ill-served of the four hero races. For them to go from blustering caricatures (except where they’re meant to be Hot, thanks The Hobbit Trilogy) to fully realized people is a treat to witness, and I continue to be a huge fan of Disa, who is warm and sharp and clever and possessed of some of the best character design work the show has to offer.

DYLAN: And a lovely singing voice, as well!

The drawback of this worthwhile focus on character relationships over mythology is that we still don’t know the significance of this tower that Elrond and Durin’s dwarf workers are building for the elf architect Celebrimbor (Charles Edwards) and High King Gil-galad. (I mean, we can guess. It seems like a nice place to forge some powerful rings…) We do learn what it is that Durin’s been so cagey about, however, which is the discovery of a game-changing new ore: the feather-light and iron-sturdy mithril.

JENNA: My love of the dwarves is conveniently overshadowing my growing frustration about Celebrimbor’s whole thing. Celebrimbor, grandson of Fëanor, master Jewel-Smith of Eregion, keeps fretting around with the hair and affect of a used car salesman to create something “beyond petty works of jewel-craft” (HA!!). Building a great forge is the key to this, and it simply must be completed by Spring for some reason. There has been no hint that anyone in the show cares at all to wonder why it has such a short deadline—why would an immortal demand crunch?—and maybe they all know, but we as the audience don’t merit even a hint, I guess.

The friendship between Elrond and Durin is an obvious attempt to recapture the fun of Legolas and Gimli’s relationship from The Lord of the Rings, and boy, is it working.

We don’t see Elrond question this deadline at all when he initially goes over the plans with Celebrimbor in the second episode. This would have been a prime opportunity to throw the audience a scrap of information, or to take the narrative opportunity to explicitly avoid sharing any information. Instead, we have Elrond go, “Ok looks cool, have you tried talking to the dwarves next door?” And then two episodes later have the dang thing already well underway.

JENNA: Not in goddamn Middle-earth he can’t!!

DYLAN: You and I are bothered by very different things about this show.

JENNA: That’s the idea! Anyway, there’s a bunch of stuff we haven’t covered from this episode, specifically Adar and that hilt, but right now anything I have to say would be pure speculation and I already have so much solid text to yell about.

DYLAN: This show has six million characters and we’ll holler about all of them, eventually. 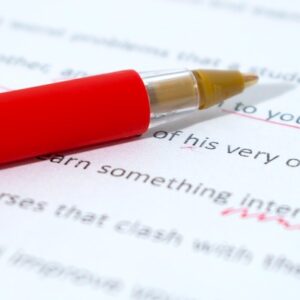 The following first appeared in Lit Hub’s The Craft of Writing newsletter—sign up here. If you hang around the writing...
© LitHub
Back to top