Duke Haney is the guest on this week’s Otherppl. His new essay collection, Death Valley Superstars, is available now from Delancey Street Press.

Haney has spent most of his adult life working in the movie business, with 20 feature-film credits as an actor and 22 as a screenwriter. He used pseudonyms for some of the screenplays and went by “D.R. Haney” as the author of a novel, Banned for Life, and an essay collection, Subversia. After he was struck by a car in a crosswalk on Sunset Boulevard, a friend claimed he walked like John “Duke” Wayne and gave him the nickname by which most people know him and he has adopted belatedly as his pen name. He plans to follow Death Valley Superstars with a novel tentatively titled XXX. He lives in Los Angeles.

“They just move into these buildings with no atmosphere and no soul. Basically, it’s a whole culture without soul.”

Brad Listi: Whatever happened to this notion that architecture should inspire us? Now it’s whatever’s cheapest, you know, we can throw it up in six months and start making money on it. You can say the same abut apartment complexes. It’s depressing.

Duke Haney: We’re seeing it all over the place in LA right now. I write about that a few times in the book. I write about the construction boom and gentrification. It’s really horrifying and has happened in my neighborhood in Echo Park. I don’t understand people who want to live in places like that. But I guess these are people who have grown up with no sense of atmosphere at all. They just move into these buildings with no atmosphere and no soul. Basically, it’s a whole culture without soul. I don’t think it’s any accident that movies started to decline. The supremacy of the art form began to decline when multiplex took over.

BL: But you were weaned on these golden age films.

DH: Seventy films, yes, I was weaned on those. We had a revival house in my hometown and they would show classic films. I saw some of those. The other thing about growing up when I did was old movies were shown on late-night television. Sometimes we would watch the movie on the late-late show or a Saturday afternoon if a football game got rained out. “Now we’re going to show you The Seven-Year Itch.”

BL: What’s the movie, the actor, the role that made you say, I want to do this and be an actor?

DH: I know the moment when that thought occurred to me. I write about this in a different book, but I was watching They Shoot Horses, Don’t They?, which is a movie from, I think, 1969, with Michael Sarrazin and Jane Fonda. It’s basically the movie Jane Fonda proved the role that she could act. It’s a movie about the Great Depression. It’s about a dance marathon, and it’s very bleak.

DH: It was a bit like that. These people dance for seventy-two hours, or a week or something, no sleep practically, and it was basically the last man standing was the whole thing of it. It’s based on a novel; it wasn’t a terribly good novel. If I had grown up ten years later I probably would have been a goth, like always depressed and angry, screaming at my parents all the time.

BL: Who was the performance that got you into this movie?

DH: It was all of it. [Jane Fonda] was great in the movie, but it was just the milieu of it because I could just identify with that heavy thing. I was sitting there watching this and thinking, I could do that. Then I thought, you couldn’t be an actor. Are you crazy? I got up and went into the bathroom, and I stared at myself in the medicine cabinet mirror for a good ten minutes. I was turning this way and that way. You know, if I aged the right way.

BL: How old were you?

DH: Fifteen. I was like, if I put on some weight and I got a haircut . . . I was thinking about it in purely physical terms, because it just seemed to be that I would be hired or not hired on that basis, not on whether I could act.

*
“So I realized, people really respond to Jim Morrison.”

BL: What was the genesis of the whole thing?

I was also going to write about some personal experiences. I thought the whole topic of LA and the film business was just a large umbrella, and I could fit most anything under it. I could write about Lee Harvey Oswald from a film perspective, which I do, and I could put it in this book. A lot of the other pieces, I thought I would decide as I moved forward, you know, I’ll see what sort of comes to me. I wanted to write about this Playmate of the Month named Victoria Vetri, who was kind of a B-movie star in the late sixties and early seventies, and she shot her husband and went to prison. I thought that’d be an interesting story, and I tried to get in touch with her, and I couldn’t get in touch with her and I’d done all this research into the Playboy history.

So I thought, I’ll just write about Hugh Hefner because I thought I had an angle on that now from all my reading. Jim Morrison, I never would have thought about writing about him except that I had seen online this really interesting photograph taken of him when he was a film student at UCLA. He’s a little overweight, with short hair. It’s really before Jim Morrison, and it was a great photo otherwise

—I don’t know who took it—but it almost looks art directed, with sort of blues and a beer bottle. So on a whim, I put it on Facebook . . . and I got like forty likes, which had never happened to me before. So I realized, people really respond to Jim Morrison.
Brad ListiDeath Valley SuperstarsDuke HaneyLit Hub RadiomoviesOtherpplpodcast
Share: 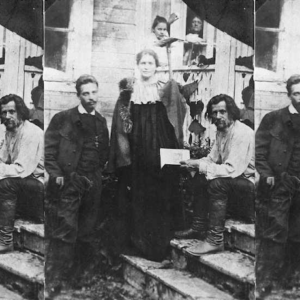 “Like most works of art, doughnuts are defined by an absence.” Elizabeth McCracken's unified theory of the doughnut....
© LitHub
Back to top