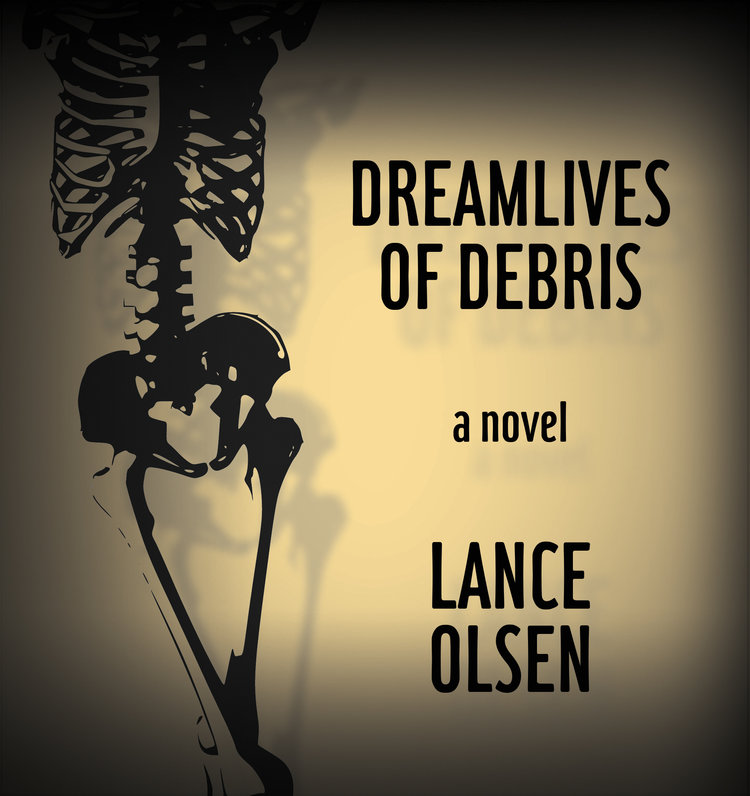 The following is from Lance Olsen’s novel, Dreamlives of Debris. Olsen is the author of more than 20 books and has work in numerous prestigious literary journals. A Guggenheim, Berlin Prize, D.A.A.D. Artist-in-Berlin Residency, N.E.A. Fellowship, and Pushcart Prize recipient, he teaches at the University of Utah.

:::: DEBRIS
They come. They go. We know the voices as distances. When somebody touches us, this is what we feel.

Or I could tell you a different story. There are so many to choose from. Some are sad. Some are sadder. The end of each is dead air. I could tell you the one about how the following afternoon they opened the hatch and extracted what was left of our prophet. Mommy asked the most delicate bits be fashioned into my beautiful new bracelet.

I could show you with that story—let us call it a romance—how much Mommy loves Her Little Duration.

:::: DEBRIS
Or I could explain to you how before and after that I watched many wars. Or maybe I watched the same war many times. Explain to you how I watched the slow wreckage of my city bogging into the earth. Daedalus’ boy attempting to  scrabble up  a hidden ladder above a seascape sheened like hammered silver, wax wings reducing to air around him. My sister Ariadne, whom I have never met, who has never called on me, not once, not ever, handing something I could not make out to a muscular young man I could not recognize standing in front of a gate I could not place.

:::: DEBRIS
Watched Daddy, whom I have never met, who has never called on me, not once, not ever, wearing only his gold necklace shaped like a string of lilies, reclining in a stone tub decorated with octopi and anemones, as the daughter of Cocalus, King of Camicus, signaled her slave to empty a pot not of warm water but of boiling oil over his head and chest and groin.

How the dying of his skin sounded like a field shrouded in locusts.

:::: DEBRIS
How your body is a haunted house from which you can never escape.

::::  LADY  TIRESIAS CHORUS
For when I die, it will have been inside the stomach of a bronze bull. It will have been inside the courtyard of a doomed palace. With the understanding that the descent into Hades is the same from every direction. That I shall soon meet Odysseus in a boundless cindery desert and, skin ashen, eyes cloudy and blank from too much seeing, violet mouth sewn shut with black catgut, he will ask me without using words to recollect what the best path of   life is. And I shall advise the sacker of cities to forget the philosophers and their metaphysics. In the end there is nothing except atoms and empty space. That is it, that is all, that is us, that is this. I shall make clear to him no one will arrive to save us from ourselves. When I die, it will have been wondering whether I am actually thinking these thoughts or only dreaming I am thinking them as I study the glowing blue flame floating out of my chest.

:::: DEBRIS
Or I could tell you the one about Debris hanging weightless in her mommy’s womb, strangling her almost-brother with his own umbilical cord, preparing to bestow upon her parents her first gift, which they would in turn mummify and boon back to her, a mutual sign of their abiding affection and respect.

:::: DEBRIS
Unless, obviously, I am untruthing.

There is always that.

Or believe I am reporting something else when I am accidentally reporting facts.

::::  SOPHOCLES SONG
And Phaedrus shares this fable about the poet Simonides. The ship he is on is sinking, the other passengers madly scrambling to save their possessions. But the poet does not scramble. The poet stands idly by, taking in the mayhem around him. When the captain asks why he is not gathering his belongings, Simonides responds: Everything that is me is already with me.

:::: DEBRIS
Because rocking, Mommy whispers: The average lifespan for a bull is twenty-eight years, honey.

:::: DEBRIS
Or I could tell you the one about Daedalus’ trial and banishment by the Athenian courts for murdering Perdix.

How a swineherd found the artificer washed upon our shores and led him to the palace. Impressed by his talent, Daddy took him in, designated him royal architect. Not long after, Mommy fell in lust with a giant white bull sent by Poseidon to penalize her for being herself. She ordered Daedalus to build her a wooden cow draped in hide to fool the bull into squalling her.

Whenever you listen to Debris, you are really listening to the echo of Mommy and that bull coupling through the night in a damp rocky field at the edge of Knossos.

:::: DEBRIS
In their chronicles the historians refer to that echo as The Daedalus Penance.

From DREAMLIVES OF DEBRIS.  Used with permission of Dzanc Books. Copyright © 2017 by Lance Olsen.

Unlikely Cat-Lovers: Four Iconic Writers and the Felines Who Loved Them 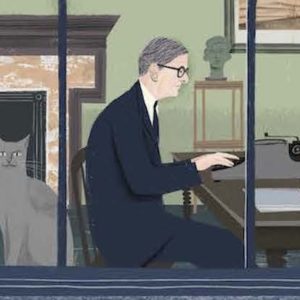 Unlikely Cat-Lovers: Four Iconic Writers and the Felines Who Loved Them The following is from Sam Kalda's Of Cats and Men. These guys really really loved their cats. William Burroughs:...
© LitHub
Back to top