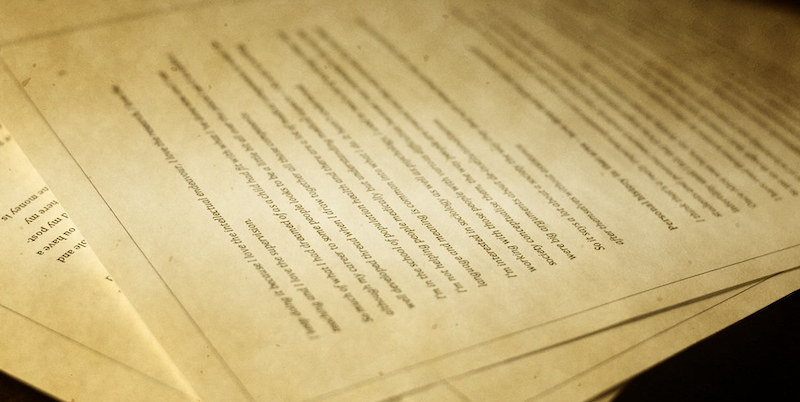 Matt Bell Suggests You Focus on Whatever Gets You Through

You might be reading this with a blank page in front of you, or with a partial draft already under way. In either case, you might find it helpful to practice generative revision, the kind of rewriting that will help you continue drafting and eventually finish the first version of your novel. At this stage, I advocate an exploratory, organic, and above all playful approach, not because it’s the only way to draft a novel, but because it’s the most enjoyable way I know how.

Now, you might ask: What kind of first draft am I suggesting you should write?

The quick answer: whatever kind you can. Whatever gets you through, whatever puts a beginning, middle, and end down on paper.

My longer answer is that you should aim to write what I call an exploratory draft.

Here’s how I do it. As I set out to begin a new novel, I usually start without a formal outline. While I’m planning to finish with a well-structured plot, I’ve never been able to start there; in fact, I sometimes have only the slightest inkling of what the story might be or who the characters are. For me, knowing too much detail in advance hems me in, tying my hands and stifling my imagination. In the earliest days of drafting, I’m often working in fragments of language and disconnected images, partial scenes and half conversations and unordered events.

Why indulge in such chaos? Because what I’m trying to do in the first draft is to discover the book I’m writing by writing the book.

I know this can sound a little magical: start writing, and the draft will come. It will come, but I understand your not taking my word for it.

What I’ve found is that overplanning before beginning writing risks blocking opportunities for discovery and surprise. Rather than dutifully following an outline, I want to be guided by what appears on the page as I write, by the emerging desires of characters and the dramatic demands of drafted scenes as well as by the acoustics of my sentences and the possibilities of the narrator’s voice. Following any individual writing day’s whims and interests, I pay attention for inspiration filtering in from my daily life and from the books I’m reading and other media I’m consuming. Then I try to put that inspiration to work in my draft, letting it flourish where it will.

I’m not the only writer who proceeds in this way. Of his own drafts, Robert Boswell writes, “I come to know my stories by writing my way into them. I focus on the characters without trying to attach significance to their actions. I do not look for symbols. For as long as I can, I remain purposely blind to the machinery of the story and only partially cognizant of the world the story creates . . . [B]y declining to analyze the story, I hope to keep it open to surprise.” Similarly, Heidi Julavits says, “I don’t think out the plot ahead of time . . . I would feel like I was an architect executing a blueprint. If I’d done the discovery before I wrote the book, then there would be nothing to discover. It would feel dutiful instead of exciting.”

How does this work in practice? I wrote for a month on my novel Scrapper before learning my protagonist’s name. I had the title before I started, but not the character: I knew only that I wanted to write about the illegal metal scrapping industry in the abandoned buildings of Detroit. So, I knew my protagonist’s occupation but not who he was; by writing scenes in which he plied his trade, I learned what he cared about, what he desired, what he feared.

A month in, I discovered the novel’s true inciting incident—a kidnapped boy, held in an abandoned house, who needed saving—by moving my protagonist through Detroit’s urban landscape, keeping him active, and paying attention to what he noticed in the places I sent him, with what he noticed being the details I invented to fill out the scenes I was discovering alongside him.

I don’t know what novel I would have written if I’d outlined Scrapper in advance, but I know it wouldn’t have been the novel I eventually published.

I know this can sound a little magical: start writing, and the draft will come. It will come, but I understand your not taking my word for it. I’ll suggest some practical ways of ensuring that it does by creating your own exploratory experience of discovery. But if you feel more comfortable writing an outline before you begin, I won’t stop you: It’s your book! Outline away. But don’t let whatever outline you make become a straitjacket. For me, a process like Nicholson Baker’s sounds ideal: “I sometimes make an ordered sequence of scenes and observations I want to include, before I start writing, but I don’t follow it,” Baker says. “The right order only comes when I’m in the middle of a paragraph, groping, wearing the miner’s hat, and looking around for where to totter off to next.”

Whether you write a full outline or make a list of scenes or paste hand-scrawled index cards all over your office wall, the important thing is not to let any of these organization schemes constrain you too early. One of the surest dangers a novel faces in its early life is a writer too eager to be sure of what it is. Pay attention to your own desires, but listen to the pages you’re accumulating: as you play on, writing your story, sooner or later the pages begin to play back. That’s the moment a draft comes to life, if you’ll give it room to breathe. Much of what I’ll suggest in this chapter is about how you reach that stage with as much possibility and surprise left on the table as you can.

Rachel Kushner once said that the writing of her first novel, Telex from Cuba, “was characterized by an enduring oscillation between perseverance and a profound doubt.” This seems to be a pretty common sentiment among novelists, and so you may already have experienced this oscillation yourself. One thing to do from the very beginning of your draft, then, is to create stores of perseverance and confidence you can draw on whenever those doubts rear their heads.

In the introduction, I said I wanted you to tell yourself you’re writing a novel from the first day, stating your intention as a way of building and maintaining drive and perseverance in the face of doubt and other negative emotions. It’s also worth remembering that the task of any individual day is never to write a novel. A novel isn’t usually drafted by your writing 60,000 to 100,000 words in one unbroken effort. More likely you’ll write yours a couple hundred words per session, maybe a thousand or two thousand words on a great day.

In the generative novel-writing class I teach, I ask students to write 500 words a day, five days a week, for twelve weeks in a row, which adds up to 2,500 words per week and at least 30,000 words total by the end of the semester. It’s an ask that always sounds daunting at the beginning of the course, but I’ve never had a student not reach the mark, especially because the goal is raw material, not polished, publishable words. You know what your life allows and what your process permits, but if you were able to commit to the same 500 words five times a week for a year, you’d have 130,000 words of raw material, easily enough for a novel or two.

I like daily goals, and I like the encouragement of this kind of simple math. For years, I had a goal of a thousand words every day I wrote; other years, it was two hours in the chair or “write from breakfast until lunch,” however long that turned out to be on any given day. When I drafted my first-ever novel—a book I never tried to publish but that taught me I could write the necessary number of words—I did it in six months by writing five days a week, two hours each session, scheduled around my job as a restaurant manager.

One word at a time—it’s all you have to do. It’s more than enough.

These are ideals, but there are plenty of other ways to proceed. You’ll also have to adapt to the changing needs of your life, with some weeks giving you more time to write than others. Sometimes my daily goal is only a single sentence, because that’s all I can manage with my schedule, but I try never to go a day without looking at the book, which seems to keep my subconscious working on it. But that’s me. Plenty of other writers have written good novels a paragraph at a time in the fifteen-minute gaps left by day jobs and child rearing or other responsibilities, while still others have drafted theirs in sprints at month-long writers’ retreats.

While I believe it’s good to set writing goals if you can (and crucial to forgive yourself when you miss them), you may also find you need to occasionally hide from the pressure you’re feeling over the novel’s outcome, whether that burden is self-imposed or put on you by the expectations of others.

How might you accomplish this hiding out, if and when you need it?

In an interview at The Paris Review, Garth Greenwell talked about how, while drafting the challenging middle of his novel What Belongs to You, he lowered the stakes by making the task more ephemeral: “I wrote it on scraps of paper, on receipts,” Greenwell said. “It was like it had to be trash in order for me to write it. It had to be utterly disposable. I usually write in these spiral-bound school notebooks, which is a way of writing something that doesn’t feel permanent, that doesn’t feel important. But even that was too solid for the middle section.”

This could be your situation as well. In order to proceed, you may have to pretend that what you’re writing doesn’t matter, that it’s for you alone, that it’s not that important: not chapters, but scenes; not scenes, but scraps of stray images. There’s no right or wrong way to proceed. But do proceed. Even if you only rarely advance in a straight line, even if you do so most often by retreating and trying again, even if you go forward by steps so tiny you find it hard to believe you’ll ever arrive at a full draft of your novel—as long as you keep writing, you’ll make it.

One word at a time—it’s all you have to do. It’s more than enough. 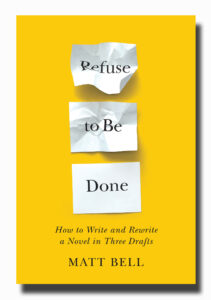 Refuse to Be Done by Matt Bell is available via Soho Press.

Matt Bell is the author of the novels Appleseed, Scrapper and In the House upon the Dirt between the Lake and the Woods, as well as the short story collection A Tree or a Person or a Wall, a non-fiction book about the classic video game Baldur's Gate II, and several other titles. His writing has appeared in The New York Times, Tin House, Conjunctions, Fairy Tale Review, American Short Fiction, and many other publications. A native of Michigan, he teaches creative writing at Arizona State University.

How to Express Your Love to Virginia Woolf 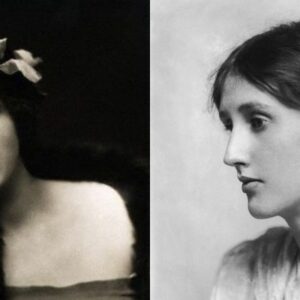 How to Express Your Love to Virginia Woolf