Does George Saunders’s Escape From Spiderhead Stand Up on Film?

George Saunders is legendary in the literary community. He’s one of the few authors who has made a name for himself almost entirely on short stories, a feat all the more impressive considering how unmarketable story collections are. He now teaches at a highly respected MFA program at Syracuse, but in the bio of his first book, CivilWarLand in Bad Decline (1996), it says that he “works as a geophysical engineer” and that “he has explored for oil in Sumatra, played guitar in a Texas bar band, and worked in a slaughterhouse.” He was 38. In the 26 years since his debut, Saunders has won MacArthur and Guggenheim fellowships, the Story Prize, the Folio Prize, the Booker Prize, a World Fantasy Award, and four National Magazine Awards.

Outside the literary world, however, Saunders isn’t exactly what you’d call a household name. Besides the fact that he primarily operates in the short-story form and that his only novel is, like his stories, an odd, experimental work about Abraham Lincoln hanging out in purgatory while grieving the death of his son, Saunders’s whole thing is dark and strange and satirical and, most significantly, morally aware tales. Some of them are just weird as hell, and all of them are thematically or ethically complex. His writing isn’t the stuff of mass popularity.

His characters are often cogs in giant, corporate machines with enigmatic aims. They’re often cut off from the rest of the world. They’re often the subjects of experiments or furtive forces operating without their knowledge or consent. He loves poking fun at corporate-ese.

In his collection In Persuasion Nation, there’s a company called KidLuv that makes an educational product called I CAN SPEAK™ (Saunders regularly uses the trademark symbol in his stories); in “Sea Oak,” from Pastoralia, there’s a male strip club called Joysticks; and from his last collection, Tenth of December, in the story “Escape from Spiderhead,” about prisoners who instead of serving time in a typical jail opt to be test subjects for experimental drugs, Saunders really lets loose his spot-on knack for names, in this case the drugs: Verbaluce™, which “pep[s] up those language centers,”; Vivistif™, for male sex enhancement; and Darkenfloxx™, which basically just administers misery.

This last story, “Escape from Spiderhead,” has all the essential Saundersian elements: the over-the-top setting (a prison run by a giant pharmaceutical company), the satirical language, the laugh-out-loud moments, and the moral center. It’s less than forty pages and takes place in a single location but packs in a ton of suggested world building.

Though it is one of Saunders’s most fascinating stories, it’s not exactly the kind of thing you would think would turn into a $100-million-dollar Netflix movie (directed by Joseph Kosinski) starring the dudes from Thor and Top Gun: Maverick and directed by the guy who made Tron: Legacy. These are tentpole figures, purveyors of IP, not oddball satirists. How would such a crew adapt a George Saunders story?

As I’m interested in how they adapted the story as much as how well the movie works on its own, I’m going to divulge some spoilers for both. To start, here is a summary of Saunders’s original: a man named Jeff is a prisoner in a facility that tests out some pretty high-concept drugs. In one experiment, Jeff is introduced to Heather. They are both asked what they think of each other, attraction-wise, and they both reply that they’re mostly indifferent.

But then a new drug is administered via these MobiPaks™ they have implanted into their bodies and both Jeff and Heather suddenly feel extremely attracted to each other and can’t help but have sex right there in the facility, in full view of Abnesti, the man in charge. Mid-coitus, Jeff comes to believe that Heather is his soulmate. But when the drug wears off, Jeff retains absolutely none of these emotions, and neither does Heather.

After repeating this experiment with another woman, this one named Rachel, Abnesti brings Jeff to the other side of the mirror. In the testing room sit Heather and Rachel, who don’t know that they both, earlier that day, fell in love with and had intense sex with the same person who at this very moment is watching them behind the two-way glass. Jeff is asked which of the two he’d prefer to receive Darkenfloxx™, the horrifying drug that Jeff describes as “the worst you ever felt, times ten,” which even then still “does not even come close to how bad you feel.” He has experienced Darkenfloxx™ and wishes it on no one, but he truly has no preference. Abnesti is delighted, as this seems to suggest that when the drug wears off, there are no residual feelings of love. No one gets Darkenfloxxed™.

People can sometimes emerge triumphant from underneath the scourge of capitalistic domination, even if it’s a tiny gesture of goodwill, but they’re often crushed by it.

But this isn’t enough for the higher ups, who want to put Jeff through another test. Now they want to see how he’ll react when Heather does get Darkenfloxxed™. He objects, says he doesn’t want to do it, but ultimately he’s powerless and he’s forced to watch as Heather suffers an awful bout of torture that ends up killing her. To Jeff’s disgusted and indignant dismay, despite Heather’s death they want to try the same experiment on Rachel, so during a moment of confusion, Jeff takes control of the remote Abnesti uses to mete out the drugs and Darkenfloxxes™ himself to death so that they can’t continue the test.

The whole moral point is that the goodness of humanity persists even when it’s clinically proven that there isn’t love there. Jeff feels no love for Rachel, but he’s a good person who would rather die than allow someone else (even someone, I repeat, about whom he feels nothing) suffer. Saunders, like Abnesti, uses the successful utility of the drug to prove Jeff’s humanity, his redemption. In many ways, Abnesti’s project is also Saunders’s: put people in elaborate quandaries and see how they react. Abnesti tests medicines; Saunders assesses our morality.

After rereading the story in preparation for the film, I wondered how they would turn what essentially adds up to a bottled parable into a big-budget film, and to my surprise, Kosinski and his screenwriters Rhett Reese and Paul Wernick (who also scripted the Deadpool films) pretty faithfully stick to Saunders’s plot. Miles Teller plays Jeff, Chris Hemsworth plays the bureaucratic Abnesti, and the love potion experiment remains at the story’s center. This being a full-length film, Spiderhead adds some elements to the mix: a love interest for Jeff, a newly created character named Lizzy (played effectively by Jurnee Smollett), a sinister mystery as to the truth behind the pharmaceutical company, and a different backstory for Jeff.

The adaptation also situates the action within an expensive, sleekly designed, and visually striking environment. The production design is impeccable and grand, though I’m not sure the story merits such diegetic extravagance. It’s a bit like publishing a book on humility in a lavish and costly edition. Saunders borrows the language of advertising and the ambitions of institutions to grapple with their dehumanizing effects.

People can sometimes emerge triumphant from underneath the scourge of capitalistic domination, even if it’s a tiny gesture of goodwill, but they’re often crushed by it, subsumed into it, and spit back out for more profit. Saunders’ worldview can be bleak and unforgiving. Erecting a monumental frame for his parable could, as I’m sure the filmmakers argued, heighten the scope of the pharma company’s power in the narrative, a visual symbol of their unstoppable plutocracy, but I couldn’t help but think of how expensive it all looked, how only a major studio could afford to build it. Add to this the presence of Teller and Hemsworth, and the question becomes: can the big guys make a movie about the little guys?

In the case of Spiderhead, the answer is unfortunately no. Though Hemsworth does his best amping up the smarmy cloy of Abnesti’s tech-bro smugness (to varying degrees of success), what ultimately fails about the film is its moral center. Jeff, in Saunders’s story, “escapes” by dying, saving a woman he doesn’t know and isn’t emotionally or genetically connected with. In Kosinski’s adaptation, it’s the developing love between Jeff and Lizzy that motivates them to fight back against the corporate juggernaut. Theirs is a typically American motive: let’s escape this oppressive regime because of what we’ll have once we’re free. Romantic love, according to Hollywood, gives life meaning, redeems the condemned, and serves as reward for our trials.

The point of Saunders’s story is precisely the opposite: an example of a sacrifice made not out of the promise of love but pure goodness. Jeff, in the story, killed a friend in a drunken fight as a teenager. The regret eats at him, and when Heather dies and he faces the prospect of condemning Rachel to the same fate, he thinks, “It was like all I had to do to be a killer again was sit there and wait.” Jeff’s “escape” is his resistance to complicity. He will not participate, even passively, in a system that kills in the name of love. As he dies, Jeff is happy because “for the first time in years, and forevermore, I had not killed, and never would.”

In a film like Spiderhead, the lovers flee the misery behind them, face forward toward the bright sun, and smile because what’s ahead of them looks beautiful, and they no longer have to care about the mess behind them. Let others deal with that. 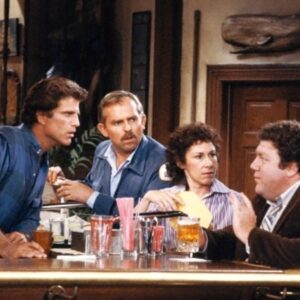 From its inception, Cheers was an endeavor between good friends to create a show about good friends. Our agent, Bob Broder,...
© LitHub
Back to top