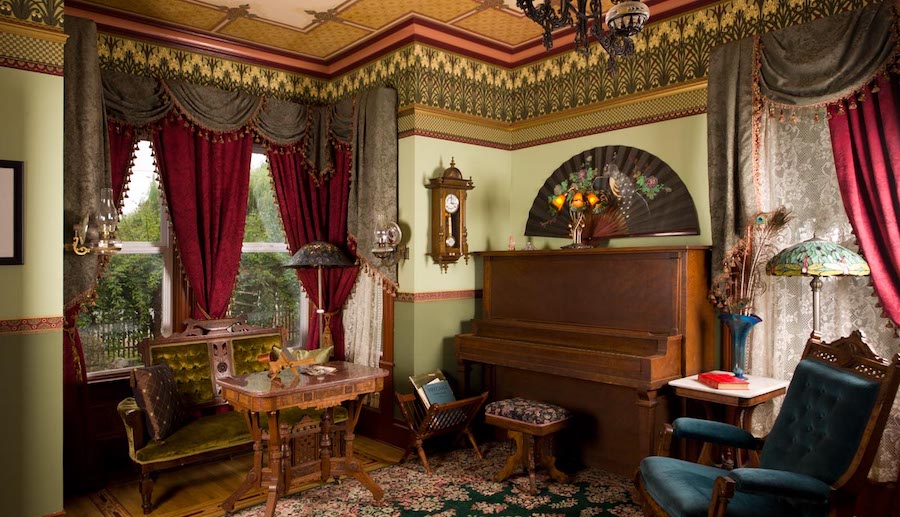 Do We Have Victorians to Thank for Consumerism?

Jennifer Howard on How We Came to Strive for Material Excess

American domestic life circa 2020 feels far removed from that of the 19th-century Londoner or Liverpudlian. But Victorian notions of décor and comfort crossed the Atlantic and held sway in stateside imaginations and homes long after the age itself had faded into history books and period pieces on TV.

Since then, Victorian material culture has been stamped on the psyches of modern readers and viewers. Its staying power owes a debt to the 19th-century novelists and journalists who documented the era’s tastes and excesses, and to the movie and TV producers who have kept alive those sometimes overheated but rich descriptions.

“Victorian” has persisted as a convenient if imprecise shorthand for a style that’s heavy in every sense. “Victorian decor” invokes curtains-drawn houses where light goes to die and where rooms are filled with furniture dark, heavy, and overstuffed. Victorian rooms, as we imagine them, were temples (or mausoleums) of things, with every surface— mantels, tabletops, shelves, sideboards—obscured by ceramic figurines and keepsakes, and every inch of wall covered with paintings and portraits.

In 19th-century Britain, during Queen Victoria’s rule, industrialization, urbanization, and the expansion of empire, together with an uptick in disposable income, put more objects within reach of more people. Mainstream conventions did not encourage those with means to be minimalists.

The burdens imposed by bourgeois domesticity were not lost on contemporaries. “It is a folly to suppose, when a man amasses a quantity of furniture, that it belongs to him. On the contrary, it is he who belongs to his furniture,” wrote a wag in an 1854 squib on “The Tyranny of Furniture” in the satirical magazine Punch.

One of Punch’s best-known cartoonists and illustrators, Edward Linley Sambourne, and his wife, Marion, occupied a house at 18 Stafford Terrace in London’s Kensington and Chelsea Borough. They moved in as newlyweds in the 1870s and lived there until their deaths four decades later. Preserved as a museum, 18 Stafford Terrace stands as a temple of well-appointed late-Victorian comfort, most of its original objects still in situ. Marion’s diaries chronicle the life of the house and keep a running list of its contents, including more than 550 pieces of furniture. Her art- and furniture-loving husband spent a lifetime adding to the domestic load. The museum website suggests his acquisitive tendencies caused his spouse agitation: The master of the house attended auctions and sales until he died, a habit that added “ever more objects to the interiors, often to Marion’s despair.”

One detail, plucked from Marion Sambourne’s diaries by Shirley Nicholson for her book A Victorian Household, staggers me: The family owned 66 upright chairs. Many were used in the dining room and drawing room, as one would expect, but ten found their way to the master bedroom and another ten more occupied the day-nursery.

This apparently wasn’t considered over the top for the time. Although contemporaries did comment on the Sambournes’ vast art collection, Nicholson observes, “contemporary drawings and photographs of other interiors show that most homes were just as crowded with furniture and miscellaneous objects d’art.”

In her book Inside the Victorian Home, historian Judith Flanders goes through a typical bourgeois dwelling room by room and examines the material goods likely to be found in each. She describes “the ever-increasing number of objects” in British homes of the era, especially from the 1860s on, which created a “deluge of ‘things.’”

The Victorian era helped establish expectations that persist today about what a well-appointed home looks like. Those standards drew on and accelerated the global circulation of resources, and promoted development of industries that turned those resources into consumer goods, not to mention the advertising and marketing systems that helped whet consumer appetites.

What I see now is a trail of household goods that stretches back in time and across oceans, back to the Victorians and that mercantile society.

Although I’m focusing here on Victorian Britain, Western cultures and nations have never had a monopoly on consumerism. In his book Empire of Things: How We Became a World of Consumers, from the Fifteenth Century to the Twenty-First, the historian Frank Trentmann details the astonishingly complex and world-spanning systems of trade and exchange, extraction and production that evolved over the last half-millennium. A professor of history at the University of London’s Birkbeck College, Trentmann directed the globally focused Cultures of Consumption research project from 2002-07. Empire of Things makes it abundantly clear, over 800 well-stuffed pages, how the history of consumerism extends far beyond the Euro-American context I grew up in and that shaped my own family’s keep-everything attitude toward possessions. Renaissance Italy experienced a boom in conspicuous consumption when it came to personal attire and household furnishings.

So did late Ming China, where the wife of a newly rich silk merchant might be seen sporting hairpin shaped like a phoenix, an ornament traditionally worn only by royal ladies. “Excess knew no limits, and there are some striking parallels between extravagance in late Ming and early Qing China and that recorded in Europe,” Trentmann writes. Conspicuous consumption has been around  for hundreds if not thousands of years, though the phrase didn’t arrive until the sociologist Thorsten Veblen coined it for his influential 1899 book, The Theory of the Leisure Class. In the 17th and 18th centuries, Trentmann observes, Britain and the Netherlands stepped up the game and “created a new kind of consumer culture” that offered more of almost everything: “The exponential rise in stuff went hand in hand with a rise in novelty, variety and availability, and this was connected to a more general openness to the world of goods and its contribution to the individual self, to social order and economic development.”

In the 19th century, this trend accelerated not just in Britain but in many quarters of the world. Trentmann teases out complex interchanges among Europe, Asia, Africa, and the Americas. Goods and fashions circulated and took on new meanings, depending on the location, class, race, and relative status of producers and consumers. By 1776, Adam Smith could declare consumption to be “the sole end of all production”—an attitude that will probably feel familiar, if increasingly uncomfortable, to those who came into their own as citizen-consumers in the latter part of the 20th century.

I find echoes of this growing global hunger to consume in the attitudes that shaped the consumer habits and mindset I grew up with, a mindset that fundamentally influenced my mother’s attitude toward her things—and set her up to be overwhelmed at last by them. In her house there is—was—a china press made from dark-stained solid wood. If a piece of furniture could brood, that one would. It stood in the same corner of the dining room since my childhood, holding a collection of seemingly useless items that would have been right at home in the dimly lit Victorian spaces of my imagination. It wasn’t until I had to get rid of them that I really wondered where all those odds and ends came from.

What I see now is a trail of household goods that stretches back in time and across oceans, back to the Victorians and    a mercantile society that came of age under the queen who gave the era her name. That society kept its financial and administrative brain in London and its beating industrial heart in cities like Manchester and Liverpool, drawing raw materials from and selling goods back to its far-flung empire.

Think of it this way: More people made more money in a society that put large amounts of resources into producing things better, faster, and in bigger quantities, and that concentrated its formidable market energies on urban centers where an empire’s worth of stuff was for sale. Queen Victoria presided over the expansion of this system, but it pre-dated and survived her.

Lucy Worsley, author of If These Walls Could Talk: An Intimate History of the Home, offers up more evidence that the Victorians bear some responsibility for creating the conditions and the appetite for what became a glut of things. “Victorian living rooms contained more stuff than ever before,” Worsley writes. Those affluent enough “wished to display the fruits of their industry and their empire. The Great Exhibition of 1851 inspired people to bring the whole world into their living rooms.” The housekeepers must have been busy in the homes of the Sambournes and their well-heeled peers.

The centerpiece of the Great Exhibition was the Crystal Palace, a barrel-vaulted, steel-and-glass edifice big enough to house the world’s wares—the ultimate china press. In his whimsical book Victorian Things, historian Asa Briggs breaks the Crystal Palace down into its components in order to convey a sense of just how overpowering the whole thing was. How big? The Crystal Palace, Briggs writes, “with its 293,655 panes of glass, its 330 standardized iron columns and its 24 miles of guttering, was the biggest and most extravagant of all the things on display, not just a building to house exhibits but in itself a symbol.”

The Crystal Palace and its displays of material wonders inspired Victorians—the expanded classes with means, anyway—to spend some of those means on material goods just because they could. But it was hardly the first flush of what Worsley calls “this craze to possess.” That fever flared up in the British body politic more than 150 years earlier, with the rise of imperial, commercial, and domestic systems set up to increase the trade in (and profit from) goods of all kinds.

“The late seventeenth-century invention of shops and shopping by an urban middle class who lived by trade was mirrored by the growth of a new type of domestic space,” Worsley writes. “What might be termed the ‘middle-class’ living room was full of superfluous objects, chosen for ornament rather than use yet cheap and not truly beautiful:  a barricade of possessions intended to stabilize a precarious position in the world.”

In Empire of Things, Frank Trentmann examines the Crystal Palace not as a singular, gigantic cabinet of wonders but as one node in the vast network of commerce behind consumerism. The Grand Exposition, along with the Exposition Universelle in Paris and subsequent expos in many countries, “displayed the products of the world in a way that blurred the lines between culture and commodity.”

That model of consumptive display carried over to the department stores of the late 19th century and the first half of the 20th. My mother spent countless hours at Lord & Taylor and Bloomingdale’s; they were destinations for her, oases in which to spend money and relax and dream of the life she wanted to live—or escape whatever troubles plagued her in the here and now.

Department stores, like museums before them, offered generations of visitors/consumers like my mother a chance to “behold the world as a collection of goods, carefully displayed under glass.” But they also held out the opportunity to bring the world’s goods home. They were, Trentmann says, “self-conscious global institutions in ways not seen before, working in tandem with those other forces of globalization  at the time: the world exhibition, the steamship, the postal service and migration.” 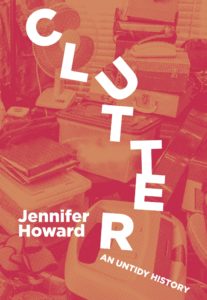 Excerpted from Clutter: An Untidy History by Jennifer Howard. Copyright © 2020. Reprinted with permission of the publisher, Belt Publishing.

Jennifer Howard is a former contributing editor and columnist for The Washington Post and a former senior reporter for The Chronicle of Higher Education. A frequent contributor to the Times Literary Supplement, she has written for Slate, Bookforum, Fine Books & Collections, and Humanities magazine, among many other publications. Her fiction has appeared in Virginia Quarterly Review, The Collagist, Blue Moon Review, the collection D.C. Noir, and elsewhere. She lives in Washington, DC. 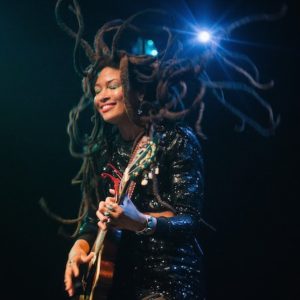 This episode continues our video series to benefit the wonderful Mighty Writers, a Philadelphia-based non-profit that teaches...
© LitHub
Back to top
Loading Comments...