Displacement Generation: On Homesickness and the Millennial Memoir

Health officials in the United States have classified more than 400 rural hospitals as being at high risk of imminent failure. Eli Saslow wrote for The Washington Post about the shuddering struggle of Fairfax Community Hospital in northeast Oklahoma to keep serving its high-need community as it runs out of basic emergency supplies and money to pay its employees. “The staff had been fending off closure hour by hour for the past several months, ever since debt for the 15-bed hospital surpassed $1 million and its outside ownership group entered into bankruptcy,” Saslow wrote. “Rural Oklahoma was down to one doctor for every 1,700 people, compared with one for every 400 nationally.”

Writers Joanna Howard and Jennifer Croft both come from this northeast part of Oklahoma—both grew up not far from Fairfax. Howard’s Rerun Era and Croft’s Homesick are memoirs that take place in a part of America that has been stripped of many of the resources and opportunities that made their childhoods in the region possible. Both begin with a sense of optimism that transitions to dread and capture the early experience of being carried away by circumstances that, in their tangle of joy and trauma, render a complicated relationship to home.

In Rerun Era, Howard writes about the noxious environment of her childhood, with townspeople dying of asbestos-poisoning from the tire factory and tuberculosis from the mines. “And yes, this is all toxic, the lead and the zinc and iron oxide in the water,” Howard writes, “and the crop-dusting of the milo fields and the tanks for the chemicals for the crop-dusting just laying around loose, and the flood waters coursing through all of these things; this makes the whole place a toxic wasteland.” But Howard also writes about the availability of middle-class jobs, like her dad’s: “It is a union job and the union is no joke and will shoot anyone that tries to fuck with its members. Well, shoot at.”

In one scene in Rerun Era, as Howard leaves Oklahoma to return to her precarious adult life in the northeast, her brother tells her that he hates their whole family because none of them want to admit she is successful. “I am not,” Howard writes. “I now live in a world where no one is ever successful. It no longer exists. Only my brothers thinks of me as successful. He believes in another time.”

Anne Helen Petersen wrote in a 2019 essay for BuzzFeed about how the parents of many millennials reared their children during an age of relative economic and political stability. Petersen writes, “As with previous generations, there was an expectation that the next one would be better off—both in terms of health and finances—than the one that had come before. But as millennials enter into mid-adulthood, that prognosis has been proven false.” But the skills and priorities millennials were taught as children, combined with growing economic inequality and exacerbated by student loans, have driven them to their exploitation more than advantage—for lower pay, worse benefits, and less job security. (In a response to Petersen’s essay, Tiana Clark wondered if this white, upper-middle-class shock over winnowing opportunity largely stems from an unfamiliarity with the longstanding exploitation and exhaustion commonly experienced by other marginalized groups.)

Both Howard and Croft confront this dynamic, having been displaced from Oklahoma by some of the same nationwide shifts in opportunity that have sent many from their hometowns, especially in rural America where middle class jobs—manufacturing, logging, mining, farming, etc.—have been largely automated and outsourced. When people leave rural regions, local governments lose their tax base, which leads to cuts in spending. As the population drops, schools close and local businesses and medical systems suffer and the vicious cycle continues.

The skills and priorities millennials were taught as children, combined with growing economic inequality and exacerbated by student loans, have driven them to their exploitation more than advantage.

But they also relocate for their own unique reasons. Croft’s Homesick evokes the struggle of being anchored to and separated from home by a sick younger sister. Croft gorgeously segments Homesick with photographs taken throughout her life, many from her childhood. Croft writes, “What she wants—what she’s always wanted—is to capture and to fix forever the presence of her sister, to contain her, to never let her go, or break, or even change.”

Howard and Croft left Oklahoma, like fellow fall-memoirist Travis Dandro (King of King Court) left central Massachusetts, like writer and illustrator Frank Santoro (Pittsburgh) left Pittsburgh. All four of these writers and artists came of age during a time when it was hard—with drops in opportunity and stability, especially in rural America—to remain in the places where they grew up. But they had other reasons for leaving. Howard’s father had a stroke. Croft’s father lost his job and her sister needed access to better healthcare. Santoro’s parents got divorced and stopped talking to each other. Santoro writes, “They occasionally run into each other at work, and pretend not to see each other. The only connecting thread between them is me.”

Each book conveys the effect of living with the expectations of an older generation, gleaning lessons along the way, and then being unable to implement many of those lessons in a materially shifted world. “I am always getting pulled somewhere by the arm,” Howard writes in Rerun Era. “And then some one is attached to the top of me by my hand and I am getting dragged around at a rate that is faster than I want to go, because I am not going! I don’t want to go! Wherever it is, I don’t want to go there!”

Each of the four memoirs also capture the powerlessness of childhood. Dandro’s father was physically and emotionally abusive and his King of King Court uses patient, sustained scenes, to conjure the way in which the euphoria and terror of childhood get tangled together. In one scene, young Dandro eats a bowl of ice cream on the stairs while his mom screams on the phone in the kitchen. In another, he watches a grape juice commercial, decides to get some, and then finds his dad shooting drugs in the kitchen. Poverty and unemployment are key risk factors for addiction, problems that have grown increasingly severe in rural regions.

Santoro’s art blends the past and present and layers the joy and intense pain of growing up. Santoro’s father too was dragged by forces beyond his control and one poignant section tells the story of how Santoro’s grandmother sent his father a record player with Motown music when he was 19 years old and a soldier in Vietnam. One day on patrol, Santoro’s father accidentally shot and killed his commanding officer and had to go on rest and recuperation in Hong Kong. He was in Hong Kong when the bunker where he lived with his buddies was wiped out to the sound of his Motown music. “At the time I just wanted to come home and start over,” Santoro’s father says. The same systems that sent teenage boys to war expected them to come home and get jobs and have children, “but I have to accept that I probably wasn’t ready to get married and start a family.” Throughout Pittsburgh, the sights, sounds, and tastes of where Santoro grew up collapse geography and time, filling the air with ghosts.

Dandro, Howard, Croft, and Santoro all endure, carried in the undertow of forces beyond their control. Croft and Howard are also both literary translators and both write with lushness, precision, and rhythm; Croft’s Homesick in particular is rich with language that vibrates with the tension of transition. As Croft writes in Homesick, “I wouldn’t know how to translate homesick, either, without sacrificing something, like the clash of its component parts.”

Santoro’s Pittsburgh and Dandro’s King of King Court capture the manner in which all homes are partially haunted by the people who lived in them, just as those homes tend to forever haunt their people.

Santoro’s Pittsburgh and Dandro’s King of King Court capture the manner in which all homes are partially haunted by the people who lived in them, just as those homes tend to forever haunt their people. As Santoro’s grandfather says to him as he leaves again for California, “You’re a wandering ghost, you know that? Call if you need anything.”

In his Washington Post story, Saslow wrote about James Graham, who had worked for 41 years as a primary care physician at Fairfax Community Hospital. He had been the pallbearer at more than 160 of his patients’ funerals and watched the town’s population decline from almost 2,000 to fewer than 1,300 through 40 years of attrition. While it’s always always been impossible to prepare the next generation for the specific hardships it will encounter—given that change tends to be the only expectation we can count on—in many ways, home feels harder to reach than ever.

By the end of Saslow’s piece on Fairfax Community Hospital, nearly the entire facility has shut down. All that remained was two nurses and a lit sign. “Emergency,” it read.

Inside France's Fall Publishing Frenzy, aka 'Oscar Season For Books' 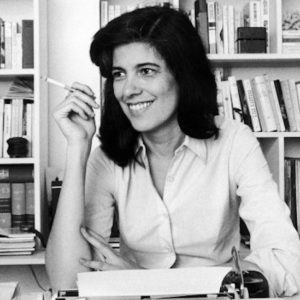 Fascinating Sontag: Gerald Howard Considers the Life of an Intellectual Superstar There are plenty of American intellectuals of the 20th century whose absence would have rendered our cultural life much the poorer....
© LitHub
Back to top