Did the Creator of The Twilight Zone Plagiarize Ray Bradbury?

Either Way, Rod Serling Definitely Pissed Him Off

In the 1950s, Rod Serling was a respected and well-known television writer, and one day he decided to try his hand at science fiction. He wrote a teleplay called “The Time Element” and sold it to CBS. After shelving it for a while, they eventually broadcast it in 1958 and got such a positive response that they hired him to turn it into a series: The Twilight Zone.

When CBS greenlit the first season, Serling was contracted to write 80 percent of the scripts. To fill out the remainder, he sent out an open call to writers—and received 14,000 manuscripts in the first five days. None of them were useable, and Serling decided he had to try another tack: getting established genre writers on board. One of these genre writers, of course, was his hero, Ray Bradbury.

In an interview with Sam Weller, Bradbury remembers that the two writers met in 1958, a year before the premiere of The Twilight Zone on CBS. Serling was a friend of John Gay, with whom Bradbury was already working, and they sat together at a Writers Guild awards dinner. “After dinner, Rod said he was starting a series, a fantasy series, but he didn’t really know what he was doing, he needed help,” Bradbury said.

I said, “Come to the house with me right now and I’ll give you books that will help you.” I gave him copies of books by Richard Matheson, Charles Beaumont, John Collier and Roald Dahl. I said, “Now you’ve got a complete idea of what your show should be like. Buy some of these stories or hire these authors to work for you, because you can’t do the whole thing yourself.”

By all appearances, Serling read the books Bradbury gave him. He also reached out to some of the writers Bradbury had turned him onto, including Charles Beaumont and Richard Matheson. Beaumont, Matheson, and Bradbury read a few of Serling’s sample scripts and liked the project, all agreeing to contribute.

Pretty immediately, Serling had his core writing crew: Richard Matheson, who is still most famous for the early vampire novel I Am Legend, would contribute 16 episodes, and Charles Beaumont would be credited with 22 before his untimely death from an unspecified brain disease at 38.

But Bradbury had less success adapting his work for The Twilight Zone. His first script, “Here There Be Tygers,” was accepted but never filmed. (The party line was that his scripts were “too expensive to shoot,” but it sounds a little more complicated than that.) In the end only one Bradbury original made it to the series: the 100th episode, “I Sing the Body Electric!,” is an adaptation of an unpublished Bradbury story. Undoubtedly the disconnect between his writing and what worked for the show irritated Bradbury, but he was also irritated by another fact: he felt Serling wasn’t original enough. In fact, Bradbury thought Serling was plagiarizing him and all of his friends—though perhaps not on purpose. “He was unconsciously aggressive,” Bradbury told Weller. “He plagiarized unknowingly.” For instance, he said:

The first program of The Twilight Zone is based on a story from The Martian Chronicles [“The Silent Towns”]. He invited me to a screening with my friend Bill Nolan and the other boys in the gang, you know, and when we came out we all looked at each other and said, “God, that looks a little bit like a story from The Martian Chronicles.” I didn’t say anything because I was embarrassed and a month or so later, Rod called me on the phone and said, “Why didn’t you tell me?” I said, “Tell you what?” He said, “Well, my pilot script is based partially on a story of yours from The Martian Chronicles?” He said, “I was in bed reading with my wife and Carol turned over, she was reading The Martian Chronicles and she said, ‘Rod, read this, it’s like your pilot.’” And he said, “My God, I realized that inadvertently I’d stolen part of your idea.” He said, “I’ve gotta buy your story and make amends.” I said, “No you don’t, the very fact that you called me and recognized that happened, that’s it. There are no problems.” Then he hung up and he calls back two weeks later and he said, “I can’t stand it, you know. I can’t stand it. I’ve gotta buy your story. My lawyers will call you.” He hung up and the lawyers never called. He shouldn’t have made the second call. He was off the hook. I let him off the hook. And then he called and talked about his lawyers and they never called. Well, after that, he stole from Henry Kuttner, he stole from John Collier.

Soon, Serling’s casual license with other writers’ ideas became common knowledge in the community. According to Jonathan R. Eller in his biography Ray Bradbury Unbound, Charles Beaumont confronted Serling with the writers’ concerns in December of 1960, as the second season was airing. He gave Serling a list of stories, including some of his own, that he felt had been used without attribution in Serling’s episodes. “These similarities were not, for the most part, deeply invasive,” Eller writes. “Even Beaumont conceded that there were two sides to the argument, and as this more or less private debate continued over the next few years, it was often hard to see more than a general influence at work in many of the stories under discussion.”

Unsurprisingly, Serling took the other side, refuting Beaumont’s claims. The next day, he sent Bradbury a letter defending himself, and expressing “his frustration with what he perceived to be the obsessive turf battles over originality in his new genre home. . . . Serling’s response was based solely on Beaumont’s analysis from the previous day’s meeting, but he knew from the dynamics of friendship that the claims originated with Bradbury himself.” He denied that the time-warping carousel in “Walking Distance” (originally broadcast October 30, 1959) had anything to do with the time-warping carousel in Something Wicked This Way Comes, which had already been adapted for television five years before. “If there is a similar mood in this piece, Ray, I can neither affirm nor deny that that mood came in part from your writing,” Serling wrote. “I admit and quite frankly that I’ve always been impressed by your sensitivity and your honesty. If there was any sub-conscious carry over of mood, I’m sure you would agree that this could well be coincidental and certainly not overt.”

The two friends met a few days later “to clear the air,” and Bradbury agreed to send Serling another script. But this too was never produced. “Ray Bradbury is a very difficult guy to dramatize,” Serling said some years later, “because that which reads so beautifully on the printed page doesn’t fit in the mouth—it fits in the head. And you find characters saying the things that Bradbury’s saying and you say, ‘Wait a minute, people don’t say that.'”

Finally, Bradbury sent over another script: “I Sing the Body Electric!” This time, production went forward, but it was fraught, and Bradbury was asked to revise the script at the last minute. But the thing that really bothered him was “one very short editing cut” in the final episode, which “eliminated the crucial moment when the electric grandmother, played to great effect by Josephine Hutchinson, reveals her mechanical nature to the children. There is no loss of continuity, but for Bradbury the cut diminished the essential difference between human and automaton on which the story hinges.”

With this disappointment added to his ongoing suspicions about his work being used without attribution, Bradbury was done with The Twilight Zone. In 1962, he refused to let his editors refer to Serling on a new paperback cover, Bradbury wrote:

Rod is a Johnny-Come-Lately, who will come and go and be forgotten in the s-f field; his greatest strength, and I wish he would realize it, lies in the sort of powerful realism he did for Playhouse 90. I wish he would go back to that and leave the s-f to us guys who know how to do it. . . meaning myself, Chuck Beaumont, Heinlein, and others.

That fall, Serling and Bradbury began to argue again, after a journalist at Los Angeles magazine began asking questions about their relationship and “the tenor of Bradbury’s comments” got back to Serling. Neither’s position had changed. In the end, Bradbury was angry enough to write:

As for our friendship, it is, of course, now officially over. I’m sorry I was a hypocrite, but I actually thought I could get over all the bugging things, and that we might finally come to some peaceful equilibrium. It seems that is not fated to be. I can only hope and promise no one will, in future, ask me about the Twilight Zone. I will try to keep my mouth shut. But if it opens, you can be sure I will try to tell the truth and not lie.

Bradbury may not have been lying, but Eller does not really see plagiarism in the episodes that bothered Bradbury—though he does see a strong influence. But maybe that wasn’t really the issue. “Bradbury’s fundamental wariness of Serling was not so much based on notions of plagiarism as on his firm belief that Serling did not have a true feel for the genre he was pioneering on television,” Eller writes.

There was also an underlying element of envy, but it was based on his own truly groundbreaking work in television, and the many disappointments he had experienced along the way. Serling’s high-pressure dealings with Hollywood took a similar toll on his own psyche, making him hypersensitive to Bradbury’s talk around town. In the coming decades, the quality science fiction and fantasy concepts that eventually reached the airways would be few and far between; but both men had, in their very different ways, made possible nearly all that would follow.

When Weller asked if Bradbury thought the plagiarism was blatant, Bradbury demurred: “Well, again, no, of course not, it was all indirect, but I got a phone call one night from Bill Nolan, I think it was, who said, ‘Turn on your set, Rod’s done it again.’ And I turned it on and it was a variation of “Presenting Moonshine,” a John Collier story. I don’t think Serling knew what he was doing.” Really? Weller asked. “I’m trying to be generous,” Bradbury said. “He wrote too much too soon, you see, and forgot what he was digesting.” Maybe that’s just what happens when you invite someone over after an awards dinner, fill their arms with books, and tell them to go forth and make a television show. Borrowed or not, at least it was a great one. 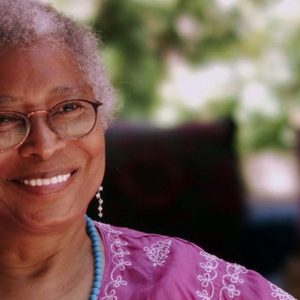 Alice Walker's Taking the Arrow Out of the Heart is now available. * What do you always want to talk about in interviews...
© LitHub
Back to top