Diary of a First-Time Book Tour

Writing a book with the word Fucking in the title has consequences. A blushing mother, for one. Questions about editorial pushback (it was their idea!). Uncomfortable exchanges with elderly ultra-Christian neighbors. And the misguided assumption that, given the obscenity, an audience will be prepared for a degree of indecency. At a reading, for example, the author might think it appropriate to tell a personal anecdote that includes the handling of rancid soft-ball-sized drain clogs, a false police report, one especially furry Bulgarian, and a film entitled Good Will Humping. She might think people would be up for that sort of thing. She would be only partially correct. Her tastefully buzzed older brothers will be fine with it, but Mrs. Van Zante, former 10th grade English Honors teacher and recent retiree, will be somewhat less enthusiastic.

Lesson number one to a first-time novelist on tour: No matter the earnestness of your intentions, no matter how much you hope to be taken seriously as a novelist—as a writer!—things are going to be inescapably, at times mortifyingly, sophomoric. (With apologies to Mrs. Van Zante.)

My first reading was in Minneapolis, for Anna March’s incredible HEAT 2015, Hotter Than Hell benefit for VIDA. Anna is lovely, her event is terrific, and the literary company is unmatched. And so I was terrified. It was not only my first reading on the Fine Art of Fucking Up book tour, it was my first ever reading, out loud, of any fiction I’ve ever written, ever. It could have been a living room audience of only my blushing mother and I’d have been terrified. It felt like a test—can I pull this off? Do I belong here, on tour, reading aloud from a book with my name on the cover?

As it turns out the real test of a first reading is not about belonging but how well one can withstand stress-induced diarrhea while appearing to be, you know, solid. I joke (I’m not joking) but truly, getting up for the first time to read from your about-to-be published debut novel is harrowing. Even if you only have to read for four minutes. Even if everybody in the audience is there to see someone other than you and is, therefore, not terribly concerned with what you’re doing or the book you wrote. Even if your proud editor is right there with you, telling you you’re going to be great, and then grinning at you from the crowd. It’s still harrowing. My hands shook. My insides thrashed. I perspired from the armpits. I talked about the perspiration because I worried people would notice but feel obligated to pretend they didn’t, and that seemed somehow more of an imposition than a steady stream of gamy sweat.

My mother saw a photograph from the event and asked, “Are you reading under a sign that says ‘MEAT’?” It felt like the right question.

Appearing on Iowa Public Radio with Charity Nebbe was one of the dreamiest moments of the tour; I’ve been a fan and regular listener for years. Charity is delightful. She is a woman of largesse. She devotes 20 percent of her airtime to regional horticulture. She coaches Girls on the Run. She fosters stray kittens. If this were a work of fiction, the criticism would be that her first name is too on-the-nose. She is the mortal opposite of pungent sweat and intestinal disquiet.

When we met at her studio, Charity smiled widely and shook my hand, putting me at ease. And then, in the sweetest possible manner, told me I was absolutely not to utter the word fuck or any other curse word on her program. Not at all, not ever. I was not to say the title of the book. I was not to tell a vulgar joke. And here I’ll paraphrase: “If a listener hears profanity and files a complaint, the fines could be monumental. Smaller stations have been brought down by such complaints. You can’t swear. Do you understand? You. Can. Not. Swear. If you do, it’ll be the end of Charity Nebbe, Kitten Heroine, and it’ll be your fault.”

So much for quiet intestines.

I managed to avoid saying actual curse words on air, but when I started discussing cream-whipped breasts I wasn’t immediately sure how to take Charity’s gape-mouthed, head-lolling eye roll. It occurred to me that she was probably signaling something like, “This is great stuff! Hysterical! Keep it going!” And so I did.

Lesson number four: Talking about heaving women impaling themselves on the swollen brawn of lust-crazed men is only very slightly better than saying “fuck” on live public radio.

The first event that was just me, all by myself, sharing my book with a medium-sized group of people, took place at City Lit Books in Chicago, which was great because I have family there. A lot of family. My parents are from the area, one brother lives there, another is close and could easily make the drive. It was a warm, familiar crowd.

So there I was, wearing my faux-leather pants, doing my best take-me-seriously-as-an-artist/writer! bit. The reading began and I started to tell a story about this time I locked myself out of my apartment when I was living in China. The story involves a neighbor, George, and I started talking about him, describing some of his personal preferences and foibles. And as I was talking, a group of my mother’s high school friends walked in, a gaggle of sixty-something women, dressed beautifully and grinning, shooting me affectionate looks and waves. The women sat together in the front row and I paused for a moment to sweat. And then my aunt walked in. Aunt Ellen, one of my mother’s sisters, wonderful, generous, Midwestern, an outstanding mom, and school nurse. Totally lovely. And so now, looking at all these estimable, proper ladies with their silk scarves and perfect make-up and sweet motherly grins, all I can think is, don’t make the cock joke. Don’t do it, do not make the cock joke. And if you have to do it, use a different word. Don’t talk about cocks in front of these good women. And then I hear myself say, “The cocks were pretty good too.”

Lesson number five: Be born into a group of highly social, loving individuals who are willing to kill themselves bringing high acquaintances, coworkers and high school friends to your book events. Try hard not to offend all these nice people.

In the months leading up to the book tour, my husband would take our two very small children for a few hours a couple times a week so I could prepare. Write, work on logistics, edits. Whatever my publisher needed. Whatever I needed. Mostly what I did was go into my office, draw the blinds, and dress up in women’s clothing. A creamy silk blouse. A cobalt blue shirtdress with silvery stars on it. Chunky three-and-a-half inch heels. A flesh-toned underwire bra. The wardrobe of a professional. A grownup.

I was playing at composure. Dressing the part. Getting mentally prepared. Trying to persuade myself I was ready. That I was capable of behaving like an adult, i.e. speaking in complete English-language sentences. It wasn’t just that I had been spending most of my time with people under three years, or the fact that, up until the moment of departure, I was nursing one of them. I was becoming an author. For real.

I didn’t necessarily feel like a fraud—I had written the book, after all—but I was afraid I’d be perceived as one. I worried I wouldn’t know what to do. What to say. How to behave. That I’d seem like I didn’t deserve to be there. That there was some trick afoot. That I was getting away with something.

Following the HEAT scene in Minneapolis and the wiener jokes in Chicago, I carefully packed all those fancy grownup clothes and went to California for a week of book events. Things went smoothly for me, but my brother in San Francisco, with whom I planned to stay for a portion of the trip, encountered some difficulty. A whole nest of difficulty. A scourge of adorable mouse babies, right there in his apartment. Feces everywhere. Orkin on site. A dozen “Real-Kill Glue Mousetraps.” A horrifying scene. Unlivable.

And so I drifted, from an Airbnb, to the city at large, to the floor of my brother’s friend’s apartment (sorry, Maggie). And with me I hauled all those fancy grownup clothes. Everywhere. All around San Francisco.

I’m not at all sure bringing all my professional writer clothes to my reading at Green Apple Books on the Park boosted my legitimacy as a Serious Author.

A few weeks later, after terrific readings at Skylight Books in LA, and Prairie Lights in Iowa City, I was leaving for St. Louis, my last stop on this segment of the tour. My two-year-old son was crying. He didn’t want me go. I’d been away “at work” a lot and he could handle no more. As I backed our car out of the driveway my son turned it up a notch, a full body wail. And then he started to vomit. Violently. So I’m backing out and there is my husband, holding our puking toddler, partly digested strawberries, macaroni and cheese, chicken nuggets, and whole milk shooting all over the garage, and my husband just keeps waving at me and mouthing, “just go, just go, just go.”

Lesson number seven: Have a superhuman spouse/partner/friend who supports and loves what you’re doing. Someone who believes in you to the extent he can ignore jetting vomit as he sends you on your way.

I know what you’re thinking: According to you, Cate, debut book tours are horror shows of armpit sweat, diarrhea, mouse infestations, very large suitcases, and projectile toddler vomit. Is this really a thing to which a sane person aspires?

To that perfectly valid question I say, yes. God yes. Fuck yes. If you work very hard, exercise devotional patience, find outstanding collaborators, and encounter more than your fair share of good luck, then you might have an experience like this. Never for a moment do I forget how fortunate I’ve been.

I recently read a Q&A with Lauren Wein of Houghton Mifflin. In it she said, among other wonderful things, “you see a stranger on the subway reading a beautiful bound edition of a book that was once a pile of Post-it–crazed pages on your desk, and you’re filled once again with the ferocious, foolhardy determination of a zealot or a pioneer.” That’s it precisely. Ferocious and foolhardy zealotry. That’s the magic of being around writers, readers and booksellers. True lovers. They make you want to do it more. Do it better. Not for the attention and validation. For conscientious, constructive participation in this community. This communion. This vocation. This crusade.

At the Los Angeles Times Festival of Books, as I was walking to my first-ever panel event of any kind—one of the earliest stops on the Fine Art of Fucking Up book tour—I crossed paths with David Ulin. David was my mentor in graduate school. He’s also book critic for the Los Angeles Times, current Guggenheim Fellow, and an extraordinary writer with eight books to his name. For far too many reasons to list here, he’s a personal hero of mine. David and I exchanged greetings and I nervously told him where I was headed. He smiled. He nodded. “Go be a novelist,” he said, like it was the most natural thing in the world. And so I went.

Cate Dicharry lives in Iowa City with her husband and two small sons. The Fine Art of Fucking Up is her first novel.

What Looks Like Mad Disorder: The Sarah Winchester House 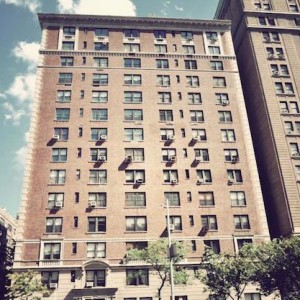 It started innocently enough. Could Amanda pick up a few groceries—it was raining so hard. Mail a letter (addressed in such...
© LitHub
Back to top