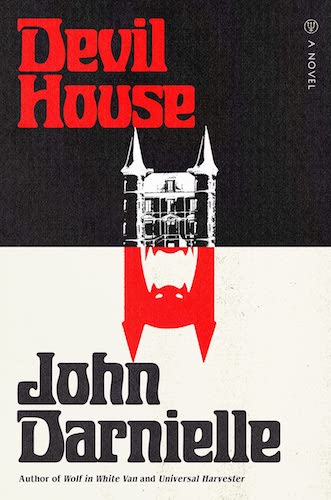 The following is excerpted from John Darnielle's new novel, Devil House. Darnielle’s first novel, Wolf in White Van, was a New York Times bestseller, National Book Award nominee, and a finalist for the Los Angeles Times Book Prize for first fiction; his second, Universal Harvester, was also a New York Times bestseller and was a finalist for the Locus Award. He is the writer, composer, guitarist, and vocalist for the band the Mountain Goats. He lives in Durham, North Carolina, with his wife and sons.

There are plenty of towns everywhere, I guess, whose reputations beyond their borders, if they have any at all, reside in single instances of popular misrepresentation or outright caricature. I try to be sensitive to this dynamic—The Music Man is all that millions of people will ever know about Iowa. Each instance of this effect further distorts our overall field of view, our sense of who we really are. Still, I couldn’t help but feel some weirdly mystical twinge in the moment when I pulled in off the freeway, knowing that the town just over there on the other side of the windshield would be my home for the next year or two: a place that would be a totally blank slate if not for a single murder case that had made the national news some years back, and another that had managed to evade the radar.

Everything about the spot looked temporary, dreamlike. I could safely attribute some of this to finding myself a little off my bearings; I’d been at the wheel for forty-five minutes just getting out of the city, and the hour it ought to have taken after that had been stretched by traffic. It was a small freestanding building, a relic of a transitional age; there was a placard reading New Visions, LLC on the near side of some Persian blinds in its windows. The shadow of the freeway in which it stood was permanent; had it been even a quarter mile down the street, the bulldozer would have come for it ages ago. The town had been growing up and outward all around it, consigning it to a disappearing past. It was waiting for its turn.

I stood before it and took a few measured breaths. My mother always taught me to take stock of the moment you’re in, to not miss the big transitions. “If you miss one, you don’t get the chance to see it again,” she said. When I was a kid, I thought this was just her way of trying to pry me away from the little Mattel handheld football game to which I’d become addicted like everybody else in my class. But after I started writing about murder investigations, I realized Mom was right: any given moment is loaded. You have to look hard at all the details of a scene before it changes on you. There may come a day when all you’ve got left are the notes you took: maybe a photograph or two, if you’re lucky.

It was a sunny day, out beyond the reach of the interstate’s shadow. The sidewalk in front of New Visions Properties was badly cracked; it looked like a bunch of giant jigsaw puzzle pieces turned image-side down and thrown into a pile. A couple of trees were doing their straggly best to outgrow the dirt squares in which they’d been planted, years ago, probably before the highway made it harder for them to find light. I looked around from the spot where I stood to find signs of anything else nearby, but in California there’s often an agreed-upon solitude to the places where people join in with or depart from the flow of freeway traffic. Gas stations fit into such corners sometimes; neighborhoods don’t, or didn’t, anyway, before people began running out of room.

“You’re Gage, do I have that right?” said Whitney Burnett, opening the door while I was still standing outside looking around. I felt like she was probably sizing me up, but she didn’t let on; she took my hand and shook it with a firm, authoritative grip, her eyes meeting mine. Any aspiring salesman can learn about the importance of making eye contact, but it takes a natural to find the sweet spot like she did. It knocked me off balance. “Welcome to Milpitas!”

We walked into her odd, doomed little office building, a white cinder-block single-story number that had to’ve been at least fifty years old, and she motioned me toward her desk, which was new, spotless, meticulously ordered in its pencil cups and picture frames, and had almost certainly been shipped to the U.S. from Malaysia by way of Taipei.

Ideally, you leave as little footprint as possible when you’re telling a true crime story: your job is to gather the facts of a case and arrange them as vividly as possible. Somebody else has already done all the dirty work for you. Arm yourself with some steady work habits and a well-lit work space, and there’s really nothing to it—just the simple pleasures of research, foot-work, and presentation. It’s like being a florist. You ask a few questions about the occasion you’re being asked to mark, and then you hide your own signature somewhere in the arrangement.

I wrote The White Witch without a blueprint, green behind the ears and itching to make an impression. When I started it, I held fast to a rule I’d heard repeated so often by creative writing teachers that I couldn’t imagine a world outside it: Write what you know. Keep it local. Start in your own backyard and spread out from there.

But I didn’t know of any other cases in San Luis Obispo like Diana Crane’s. People get murdered everywhere, but not every murder blooms into myth; and few of the myths that do find enough oxygen to live on from generation to generation can be followed—by means of supplementary materials: clippings, transcripts, photographs—all the way back down to the flesh and blood at their roots. So I burrowed down in library basements north of Carpinteria but still well south of San Francisco, and I scrutinized old newspapers in the harsh light of the microfiche reader, practically throwing darts in the dark: Does this victim seem like someone the neighbors might have gossiped about? Did this killer use some method gruesome enough to fire the local imagination? Does this story sound like kids might have spread rumors about it in their do-nothing towns?

It takes a few weeks, but you need only the patience of those weeks and a little driving distance between neighboring towns to find what you’re looking for. I always found plenty, more than I needed, and, after emerging from the library, I’d drive around with a Thomas Guide hunting down any places reporters might have mentioned in passing: Restaurant parking lots where somebody got shot. Liquor stores where a robbery’d gone wrong. Public schools where something awful had happened one weekend, left undiscovered until Monday.

It’s voyeur work. There’s no way it doesn’t leave some kind of mark on you. The case I picked for my second book involved a home health nurse intentionally blinding a millionaire on her caseload in order to effect a miracle cure and maybe get rewarded: the patient died, and the family hired a private detective to look into it, who, after a little legwork, scouted out the families of a few other former patients. They’d all been surprised to find themselves burying their parents and grandparents, who’d all seemed quite healthy for their age right up until their sudden and precipitous declines.

I called the book Spent Light. I remember parking my car in front of the house where the nurse had once lived, gazing up at its porch, and trying to imagine her walking out, handbag stocked with the wood alcohol she’d be administering daily to some ailing old man until he died of evidently natural causes. I remember sitting in that car for half an hour, watching the sun sink behind the low hills, and then thinking: This isn’t enough.

That was the night when, for the first time, I knocked on a stranger’s door to ask if they’d let me inside, and the night I stumbled across my method, which, like anything else in the world, I guess, has both good points and bad.

We’re All Just Extras Here: Wandering the Back Streets of Old Hollywood 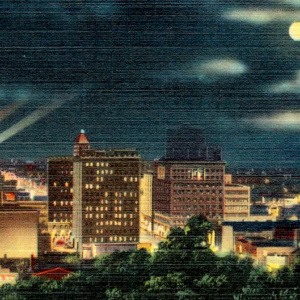 We’re All Just Extras Here: Wandering the Back Streets of Old Hollywood I had forgotten about the churches. Or maybe I had only imagined that I ever knew. Hollywood, city of churches. Wasn’t...
© LitHub
Back to top