Dylan Mulvaney on the Different Design Approaches to
a Classic Novel

More than 70 years after it was first published, Camus’ classic novel The Plague is a best-seller again. Penguin Classics has already reprinted it twice this year and is struggling to keep up with orders.

The novel, an allegory about human resilience and hope in the face of suffering, centers around a deadly plague strikes the people of Oran. Fear, isolation and claustrophobia follow as they are forced into quarantine. Some resign themselves to fate, some seek blame, and a few resist the terror.

Let’s look at the book covers that dozens of designers over decades have done, all working with the same brief, form, and restraints. Let’s see what symbols they use, how they relate to the novel and the range of results.

Oran, Algeria is a French colonial city on the coast of the Mediterranean. When the plague hits, the town closes its gates and everyone goes into quarantine. After the plague lifts, the city is still isolated by its location. It sits in the center of a bare plateau, surrounded by hills and a bay.

The first cover used this symbol. Since then, it’s been the most popular approach. These covers depict empty cityscapes and streets, figures in isolation, and social distancing. The solutions range from representational to abstract and use painting, illustration, photography, and typography. 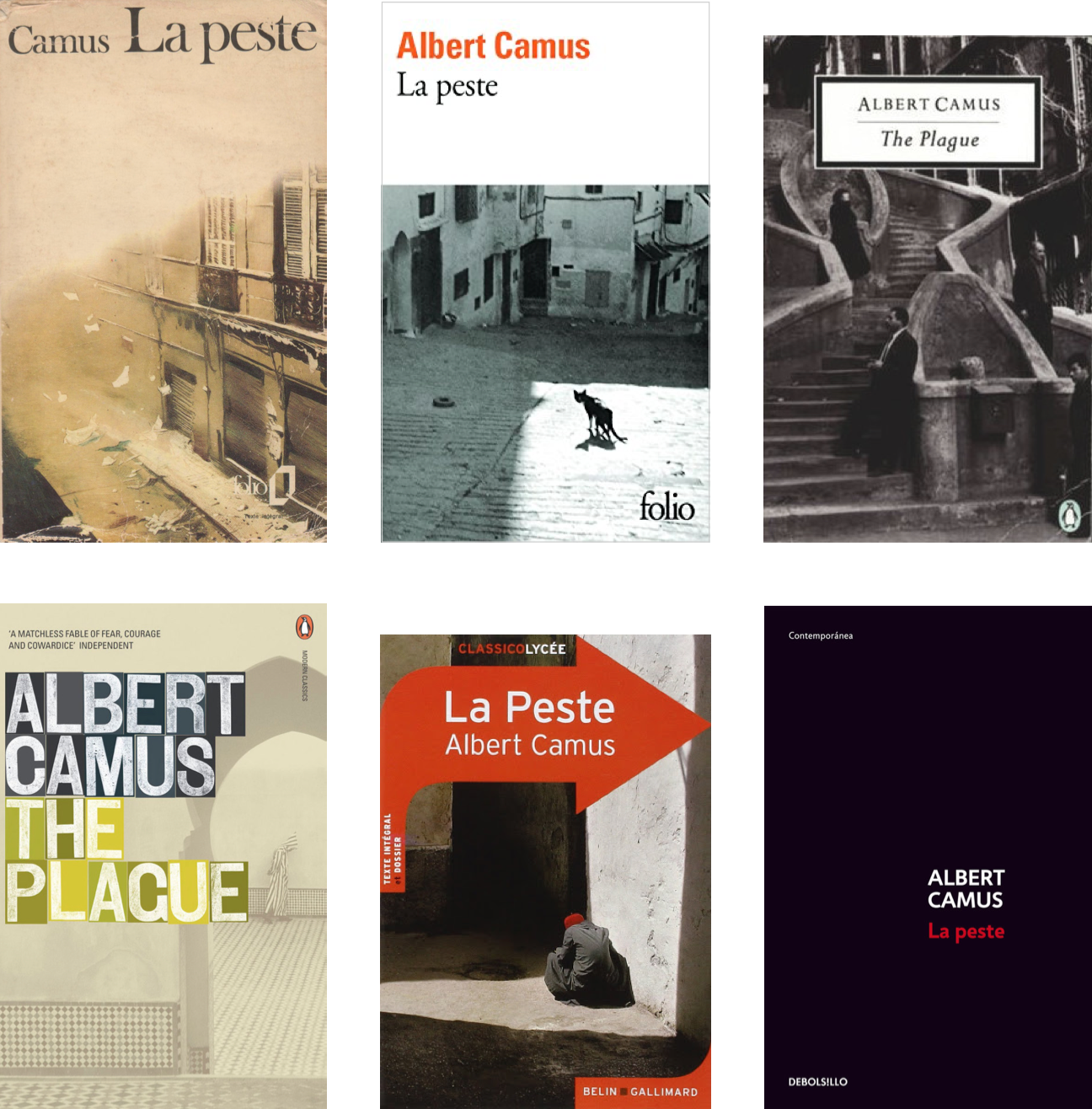 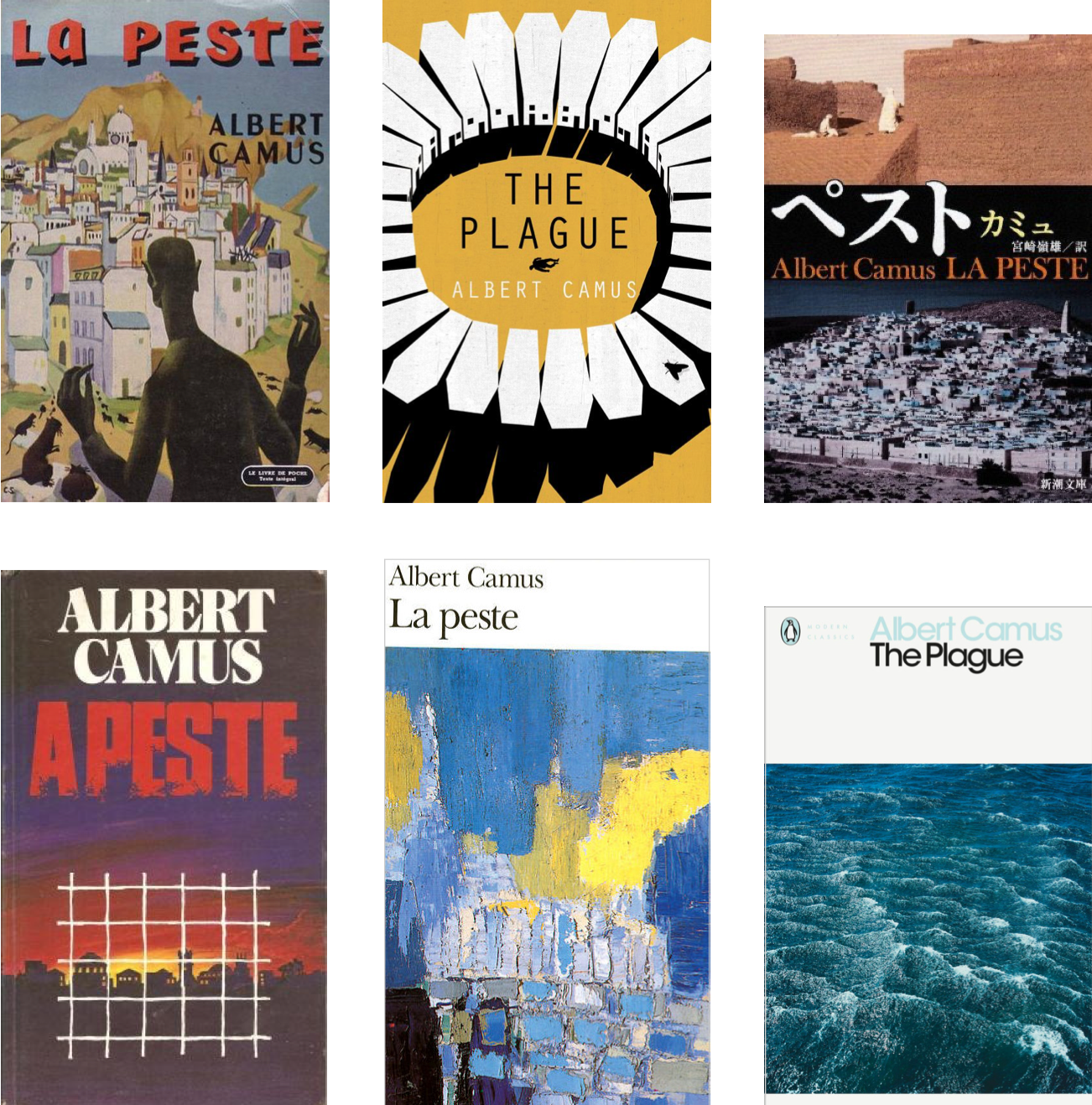 *
The Rat
Disease, resistance, and persistence

The rat has traditionally symbolized disease. In the novel, the rat appears as the first omen of the plague but they also parallel the people. As rats begin to die, people follow suit. They adapt and survive in the new harsh conditions. When the rat begins to thrive again, it’s a positive sign that the people of Oran will too.

The first English edition used this solution. Its cover has been adapted and reused since. Others, like these, have built on the theme. They depict groups of rats, single rats, and paw prints. The solutions range from representational to abstract and use painting, illustration, and photography. 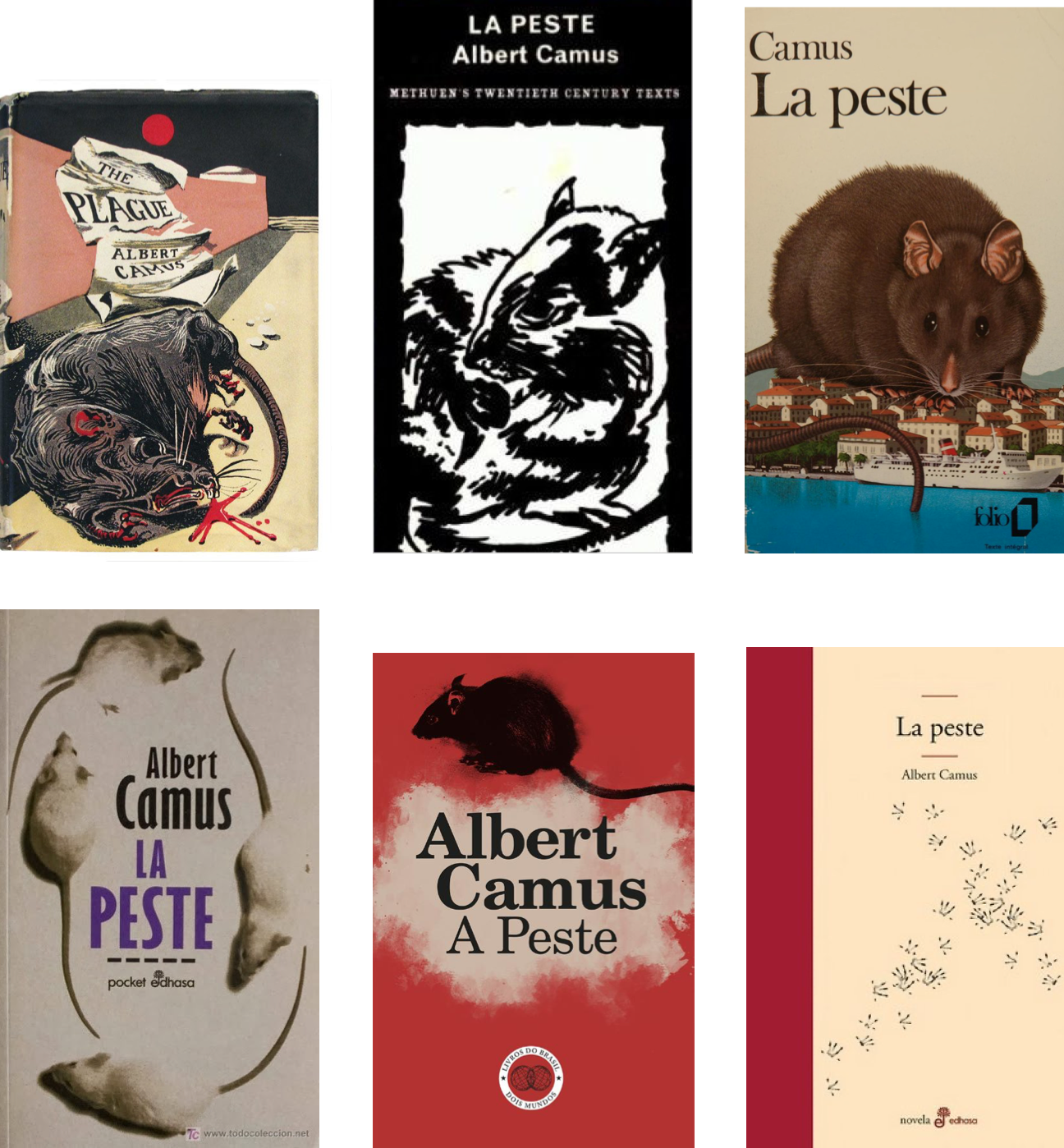 In the novel, Oran is struck by a deadly plague. Some resign themselves to fate, some seek blame, and a few resist the terror. The plague serves as a metaphor for any condition of suffering which is absurd. From health hazards to oppressive regimes, occupation, and war.

These covers depict a virus under a microscope, red swellings, darkness seeping in, and blood. The solutions are surprisingly uniform. They use either abstract circles or dark ink and paint. 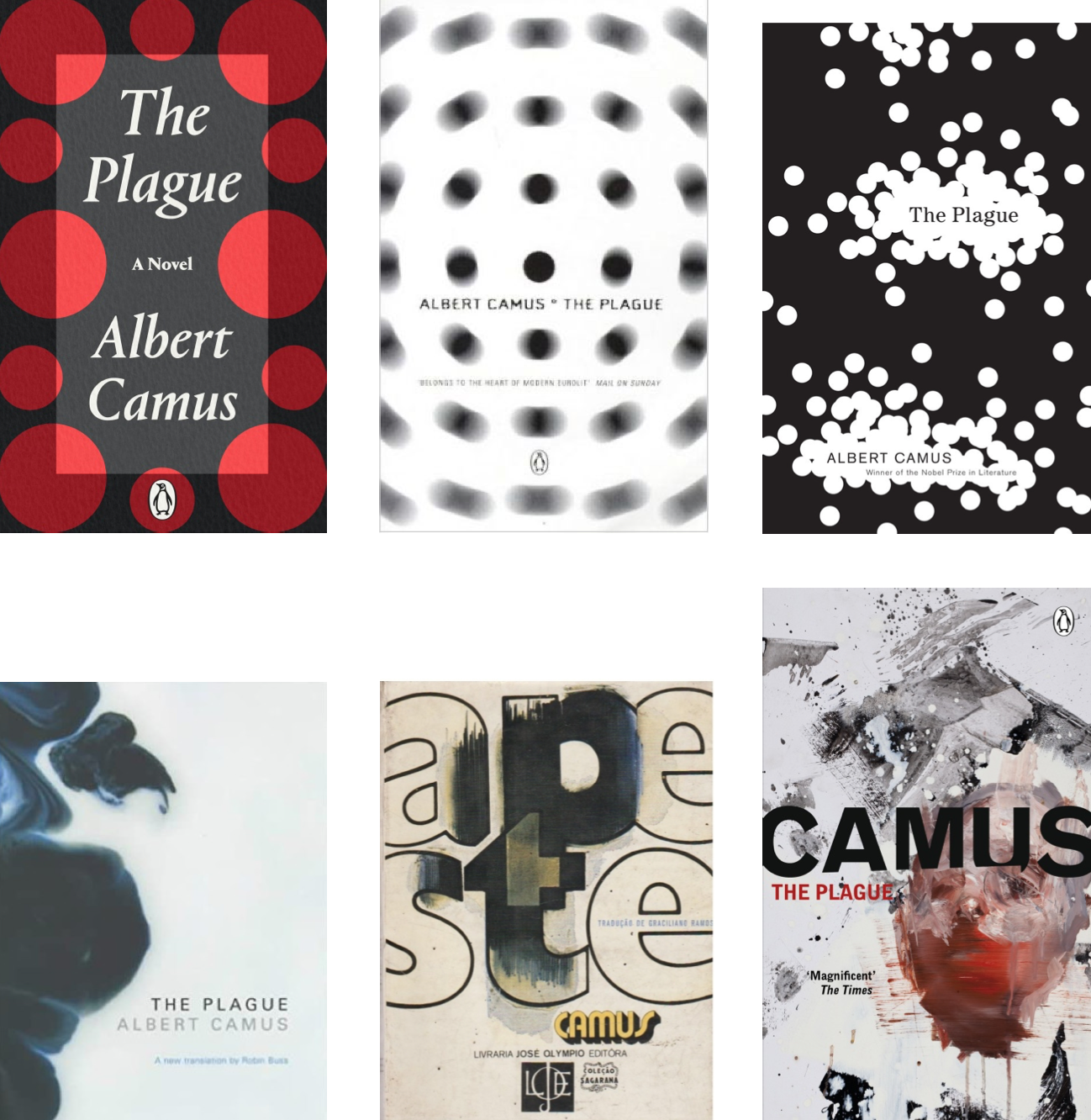 *
The Plague Doctor
Resistance to suffering

During the bubonic plague, the personal protective equipment worn by doctors became associated with death. However in the novel, Dr. Bernard Rieux represents reason and resistance. He goes out day after day in the midst of the epidemic, risking his own life to save others. These covers depict the plague doctor’s gown, gloves, wand, and respirator—in one case placed over Camus’s face. The solutions are all representational and use etching, illustration, and photography. 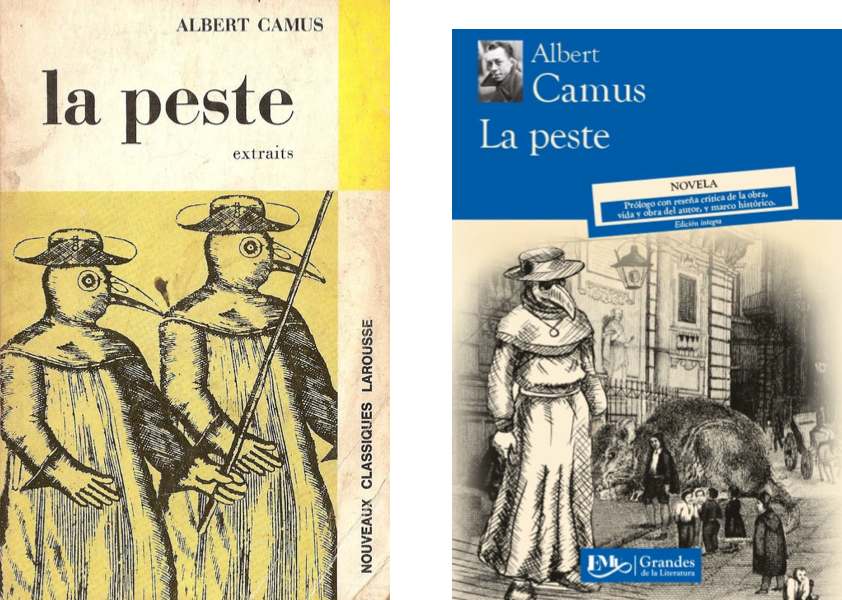 *
The People
Mental and physical effects of suffering

In the novel, we watch how people react to, cope with, and learn from hardship. At first, they try to ignore or downplay the plague. Some see it as divine punishment and others a means to profit. Some give up hope and others resist. They remind us that though the world is indifferent to suffering, we must fight against it.

These covers depict tainted, broken, and disintegrating people. Gaunt figures with hollow eyes. The Korean Version uses Edvard Munch’s “By the Death Bed” from 1893. The solutions range from representational to abstract and use painting, illustration, and photography. 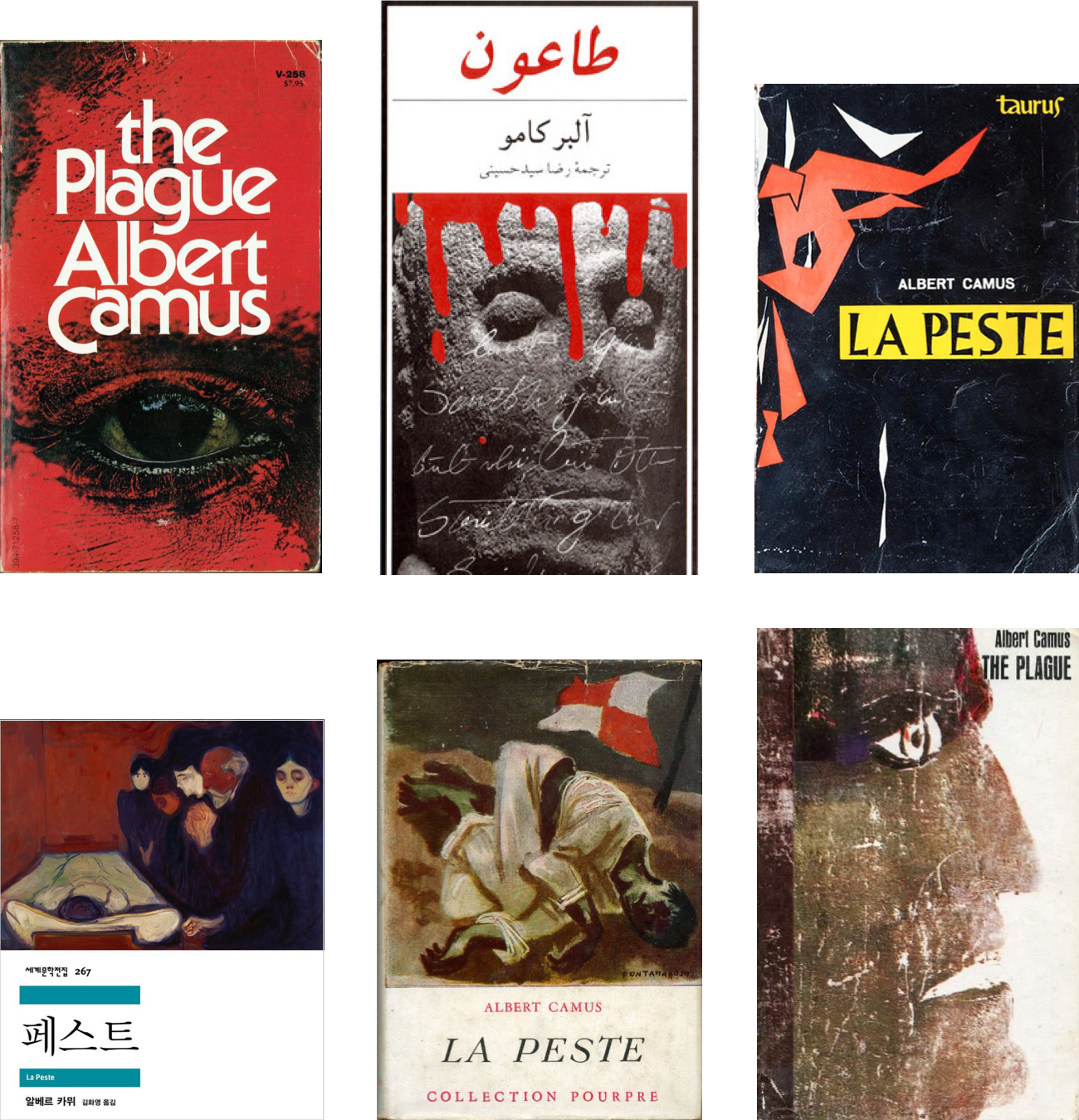 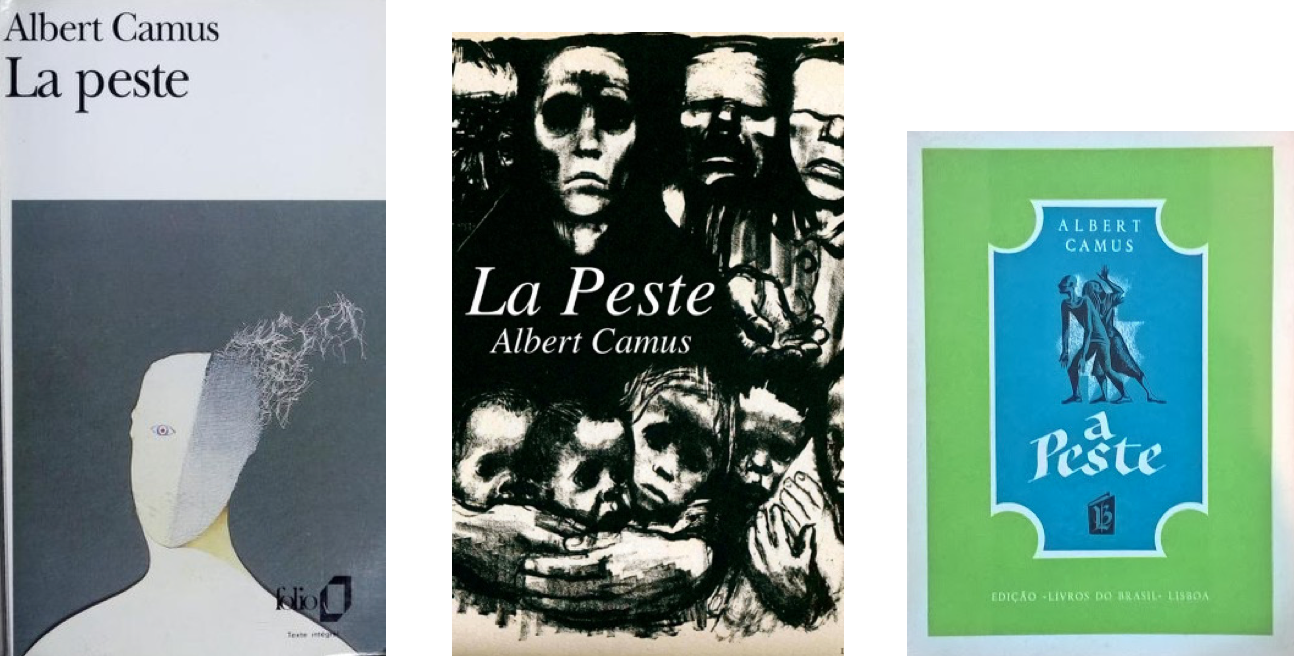 Symbolic reminders of death and the fleetingness of earthly pleasures used in art for thousands of years. In the novel, the plague serves as this reminder. It forces people to realize their life may be over at any moment. Skulls are the most used symbol. Picasso’s Still Life with Steer’s Skull from 1942 depicts the skull of a bull, an animal representing life at its most vital. Another popular symbol is the grim reaper and its scythe. Others use an animal’s carcass—a standard of Dutch still life painting. The solutions range from representational to abstract and use painting, illustration, and photography. 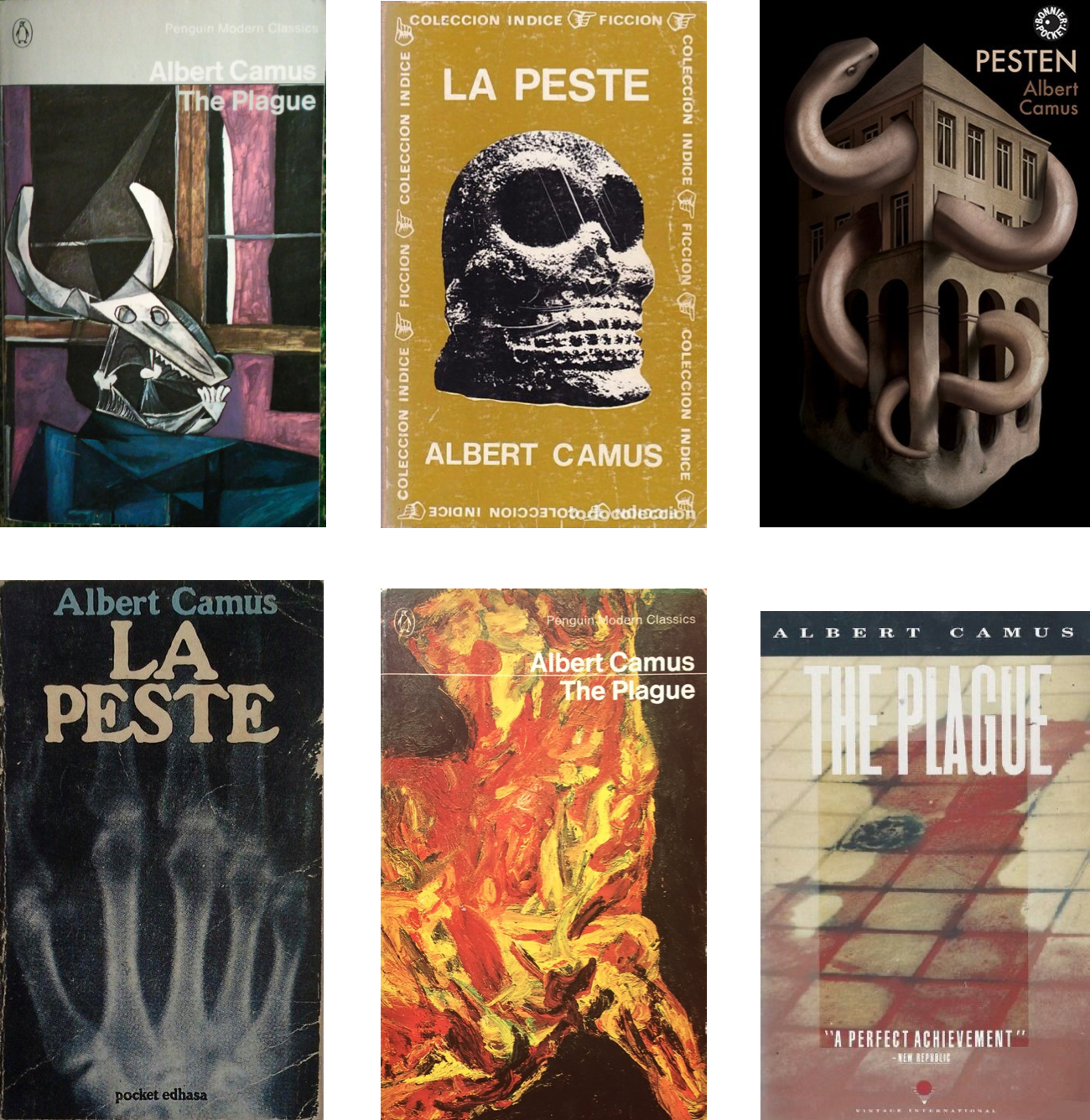 Dylan Mulvaney is Head of Design at Gretel. His expertise lies in translating core values, strategy, and voice into striking visual executions for clients like Vice, Netflix, Knoll, and MoMA. His work has been honored by the D&AD, the Art Directors Club, the Type Directors Club, and Fast Company.

Bess Kalb on How Comedy Saves Her 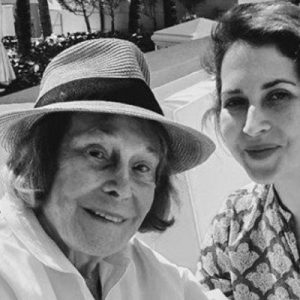 Bess Kalb on How Comedy Saves Her

You might not know that if you find a lipstick that looks great on you, that you should buy twenty because they're likely...
© LitHub
Back to top
Loading Comments...