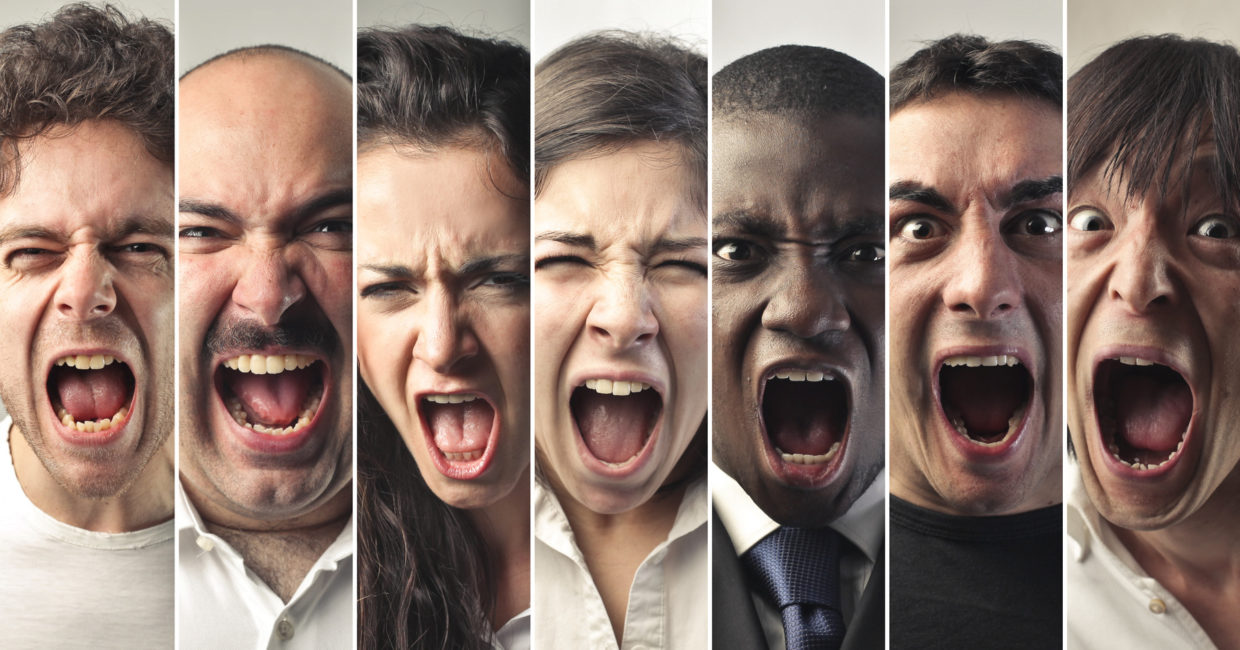 David Ulin on the Broken Politics of Rage

Two Minutes is Long Enough for Things to Go Wrong

Let’s pretend, for the sake of conversation, that I’m more rational than I am. Let’s pretend that, during the Women’s March in Los Angeles two months ago, I didn’t get into it with a small group of counter-protesters, seven or eight men (what else would they be?) and one ten or eleven-year-old boy barricaded behind a phalanx of police officers and women volunteers from the march committee, defending their First Amendment rights. Think about that image for a moment: these men, in their Trump tee-shirts and red MAGA baseball caps, like a cast of crisis actors, protected by the very people they had come to confront. I love this and I hate it—love it for what it says about us, hate that it should need to be said.

I wasn’t looking for a counter-protest when I went to the march. Or perhaps I should say I wasn’t looking to engage. Over the last 14 months, I have grown increasingly pessimistic about the possibility of shared ground. A year ago, I still believed that we might find a commons, whether virtual or actual, one nation indivisible. Now, I can no longer say. Yes, we share a country, but do we? I live in California, sanctuary state, ground zero of the Resistance—or so we congratulate ourselves, even as ICE deports workers north and south. It is with real relief that I cross back into California from America after every trip I’ve taken since the election, as if I am not coming home but returning to some sort of safe space. And yet, if I’m being truthful, I have to acknowledge that there is no safe space, just the thin veneer of civility, of convention, which ebbs and flows according to circumstance.

In mentioning civility, circumstance, I’m not referring only to the president, whose racism and misogyny has turned up the heat on all our simmering hatreds, nor to the supporters who see permission in his prejudice. I’m referring also to myself. I want to believe I am better than those others: more tolerant, more rational (that word again), more inclined towards dialogue. Really, though, I am tired. Take the march, for instance: I was exhausted before I left my house. I was filled, as I have been for some time now, with a tangle of emotions—rage, despair, a sense of loss. I did not go to the march to express solidarity so much as … I don’t know how to put it into words. I was not looking for a fight but neither was I looking for consolation. A vague part of me wanted to be reassured.

We marched, all shapes and ages and ethnicities, from Pershing Square to City Hall. A century ago, Pershing Square was called Central Park; it was renamed, after WWI, to honor General Black Jack Pershing, about whom the president lied during his campaign for office, repeating a discredited story in which the general ordered US troops in the Philippines to execute Muslim extremists using bullets dipped in pig’s blood.

This, of course, is what we are up against, this wholesale disregard for history, this disdain for any narrative not our own. We are down the memory hole, as George Orwell put it in Nineteen Eighty-Four, published six months before his death in January 1950 at the age of 46. Nineteen Eighty-Four is not my favorite work of Orwell’s—too didactic, too starkly allegorical, his subtle sensibilities reduced to slogans: “War is Peace; Freedom is Slavery; Ignorance is Strength,” “Big Brother is watching you.” I prefer the essayist who wrote “The Spike,” “Shooting an Elephant,” “A Hanging,” “Politics and the English Language,” “Inside the Whale.” “With all its injustices,” Orwell observes in the latter, “England is still the land of habeas corpus, and the overwhelming majority of English people have no experience of violence or illegality. … To people of that kind such things as purges, secret police, summary executions, imprisonment without trial, etc., etc., are too remote to be terrifying. They can swallow totalitarianism because they have no experience of anything except liberalism.” Those lines were published in 1940, but I can’t read them without imagining the current catastrophe. Something similar might be said of this country, that our experience is so cosseted we cannot see it for what it is.

What makes Orwell’s message trenchant is that it insists self-deception cuts both ways. He was not writing about the nativists, the nationalists, the bigots, or the Fascists, but rather about the liberals. He was addressing civility, in other words, and circumstance, our tendency to blame one another, which is to say: our tendency to absolve ourselves. I, however, am not interested in absolution. I am interested in complicity. I was uplifted by the Women’s March; the day was beautiful, pale winter sunlight and half a million in the streets. The attention to the upcoming elections was encouraging. The signs, well … I always enjoy the signs. I was particularly inspired by the state attorney general, who spoke on immigrants’ rights. Two days earlier, he had warned California employers they would be subject to legal repercussions if they cooperated with ICE. If nothing else, the march was a reminder of our solidarity.

Even so, there I was, in the early afternoon, wandering from City Hall down Spring Street, past the Police Administration Building and the Los Angeles Times. I was with my wife, and a friend and her daughter, when we noticed a small cluster of people, south of the main crowd. This group was pushing at something, fingers and fists upthrust. I wasn’t looking for a counter-protest; I wasn’t looking to engage. I was hungry, thinking about lunch at a restaurant a couple of blocks away.

Then, we caught sight of that narrow line of the president’s supporters behind the barrier of cops and march defenders, and the thin veneer of civility, of convention, broke away. My wife and I waded in, leaving our friend and her daughter at the fringe of the crowd. On every side, we could hear screaming: curses, threats, and arguments. Somehow, we reached the front. Ten feet ahead, one of the counter-protesters (the ringleader? in any case, the one whose voice I recall) was shouting that the border wall, the deportations, were not racist because Mexico is a country, not a race.

More for the memory hole, and on the very pavement where, 75 years ago, American service members attacked Mexicans and Mexican-Americans during the Zoot Suit Riots; “Marching through the streets of downtown Los Angeles,” Carey McWilliams explains in North from Mexico, “a mob of several thousand soldiers, sailors, and civilians, proceeded to beat up every zoot suiter they could find.” McWilliams continues: “Pushing its way into the important motion picture theaters, the mob ordered the management to turn on the house lights and then ran up and down the aisles dragging Mexicans out of their seats. Streetcars were halted while Mexicans, and some Filipinos and Negroes, were jerked from their seats, pushed into the streets and beaten with a sadistic frenzy.”

It would be dishonest to say I remembered this as I listened; it would not be dishonest to say I let myself go. The release felt nearly spiritual, like a conscience being shed. All of a sudden, I was liberated — and I was not alone. To my right, I could hear my wife call out: “Fucking racist,” she began. I moved until I was face-to-face with the defenders, at which point I started, too. “What kind of father subjects his son to this?” I yelled, gesturing at the boy, although I didn’t know whose child he was. To be honest, I wasn’t thinking about that kid, what it must be like to stand there as we raged. I wasn’t thinking about my own kids either, although my daughter was in the crowd at City Hall with friends and would have been mortified. I yelled for a minute, and for another, so swept up by my anger and my hatred that I could feel it in my chest, like phlegm, something to push out. The sensation was both familiar and unfamiliar, standing on these streets I knew so well, screaming at people I would never know at all. Then it was over, or maybe I caught sight of myself. I turned to my wife and took her elbow, and gently steered her from the crowd.

Later, when we returned home, my wife felt consumed with remorse. I kept thinking about the veneer, how fast it had shattered, how quickly things had gotten out of hand. I kept thinking about responsibility and groupthink, how the mob extends its own permission, similar to the president’s rhetoric, and regardless of the side with which you align. “As soon as man has surrendered himself to the crowd,” Elias Canetti writes in Crowds and Power, “he ceases to fear its touch.” Mostly, I thought about George Orwell, and Nineteen Eighty-Four. Early in the novel, he introduces the Two Minutes Hate, a mechanism of mass catharsis, in which citizens scream and throw objects in a frenzy of violent invective until they lose themselves in a seething mass. “The horrible thing about the Two Minutes Hate,” Orwell explains, “was not that one was obliged to act a part, but, on the contrary, that it was impossible to avoid joining in. Within thirty seconds any pretense was always unnecessary. A hideous ecstasy of fear and vindictiveness, a desire to kill, to torture, to smash faces in with a sledge-hammer, seemed to flow through the whole group of people like an electric current, turning one even against one’s will into a grimacing, screaming lunatic. And yet the rage that one felt was an abstract, undirected emotion which could be switched from one object to another like the flame of a blowlamp.”

Yes, I want to say, that’s it exactly; this is precisely how I felt. Two Minutes Hate. Isn’t that what we were doing? Isn’t that where we had been? We are all one provocation from the limits of our rationality. We are all complicit in our rage. But rage—where does it leave us? It is a closed loop, with no way out. “That was all,” Orwell writes, describing not the shouting but its aftermath, “and he was already uncertain whether it had happened. Such incidents never had any sequel.”

From Wallet to Typewriter, the Effects of Sylvia Plath Are Now For Sale 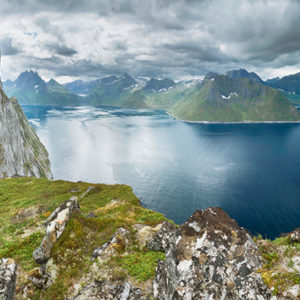 Tror du det kommer til å bli regnvær i dag? That’s how to write “Do you think there will be rain today” in Norwegian....
© LitHub
Back to top