On the Perils and Pleasures of Hagiography

The most compelling scene in The End of the Tour is the penultimate, in which the journalist David Lipsky (played by Jesse Eisenberg) is getting ready to leave the Illinois home of David Foster Wallace. Lipsky has spent the last five days traveling and staying with Wallace (played by Jason Segel) for a Rolling Stone article about the end of his Infinite Jest book tour. We’re told it’s the very moment at which he will be solidified as a once-in-a-generation literary genius, and at which his life will irreversibly change.

Wallace goes to scrape snow off his car, and Lipsky, after long hours of navigating a profoundly cagey interview subject, of whom he is extraordinarily jealous, is finally alone in Wallace’s house. He begins to run frantically from room to room, logging every detail quickly as he can speak them into his tape recorder: dog shit stains on the carpet in the living room, a blue fuzzy toilet seat cover, a Barney towel hanging as a curtain above an unmade bed. He finally enters a dark room—slant light from the open door exposes a sallow and bulky desktop computer (it’s 1996), and keyboard. He opens a heavy curtain, and the room is illuminated; but he only looks out the window, presumably towards Wallace in the driveway, finding nothing revealing of his mystery in the writer’s office.

The End of the Tour tells part of the story of a colossally successful novel, but it’s really about the perils of the real, about nonfiction—specifically life writing, in the forms of a profile, a literary biography, and, ultimately, a biopic screenplay. The near-fiendish mining of a life for the pleasure of readers (or viewers, in this case) and the dangers of such an act aren’t new ideas, anymore, in a world that celebrates self-conscious and present narrators of varied integrity. The seminal example might be Janet Malcolm, comparing herself to a burglar in The Silent Woman: “rifling through certain drawers that I have good reason to think contain the jewelry and the money, and triumphantly bearing my loot away.” (She actually does find herself, later in the book, snooping around Ted Hughes’ back garden.) Inherent in writing about a person who isn’t you is trespassing on the private property of someone else’s life—this much we know.

But Lipsky’s intrusion on Wallace in particular exemplifies the exceptionally treacherous hazards of writing about another writer, especially a dead one. The devastating knowledge, of course, that audience members will bring to the film is of Wallace’s 2008 suicide, though neither it nor the events preceding it are depicted. The End of the Tour closes two years later, with Lipsky reading from his 2010 book on which the movie is based, Although Of Course You End Up Becoming Yourself. Attending this event is a distinctly larger crowd than at a similar one in the beginning of the film, when, before interviewing Wallace, Lipsky had just published an unremarkable book called The Art Fair. Fourteen years later, after Wallace has killed himself and Lipsky has published his book of their interview transcripts, a tear falls down Lipsky’s nose, and you can’t help but think, as some reviewers have, as well as his estate, that David Foster Wallace would have hated it. That Lipsky has somehow subsumed Wallace, or, more sinisterly, Talented Mr. Ripley-ed him, having only achieved his moment given Wallace’s permanent absence from the planet. And only with records of conversations that entomb his intelligence, mindfulness, and wit inside a spiked magazine profile, inside a book, inside a movie—Wallace himself is lost.

That’s not entirely true, though. The treasures of Lipsky’s work, and thus the film, are the records of Wallace’s words, through which we gain insight into that desperate tension between fame and obscurity that plagued him, and to which those shifting, sliding planes of the real and unreal are closely tied. A cornerstone of Wallace’s work, and the main crisis of Infinite Jest, is the possibility of unencumbered pleasure ushered in by the 21st century, to which Wallace reveals in the film he feels incredibly susceptible as an addictive, lonely personality. He worries that virtual pornography will one day make physical sex obsolete, and that the same principle applies to the mass consumption of a universally loved novel: the more people want it, the more people get it—but the less people really feel it. Wallace’s view of himself as a kind of everyman was essential to his identity as a writer, and that devotion to authenticity extended to the work; Infinite Jest is just about what it’s like to be an American, he professes to Lipsky. But The End of the Tour is filled with specters of Wallace’s rising fame, and the loss of his real self, like a manic Joan Cusack as a bookstore groupie, listing all of the minor celebrities she’s driven around town. Or Lipsky’s interest in Wallace’s signature bandanna, which, unbeknownst to Wallace, has become his “thing.”

No one writes a thousand-page novel just to be like everybody else—that’s what Lipsky challenges Wallace towards the end of their road trip. It’s fascinating to watch their relationship devolve as quickly as it came about, precipitated by—what else—a woman, a beautiful poet, who Wallace dated in graduate school and on whom he perceives Lipsky to put the moves. The extreme sensitivity of these two male writers’ egos won’t be unfamiliar to anyone who knows a few of that species (or even a single one), and it works deliberately against Wallace’s assertion that no, his writing isn’t about attention, it isn’t about pleasure, it isn’t about “getting [his] dick sucked,” when Lipsky accuses him of faux humility, of being all shtick.

This is the central conflict of Wallace’s professional life, which he explains finally in talking to Lipsky about the extreme depression of his twenties. He feared that life, art, literature—it was all nothing, and he was nothing. Every act is in service of the same based desires, over which no one has any control; as Wallace’s biographer D.T. Max puts it, “our passions are no longer our own.” His mental state, he recounts in Lipsky’s transcripts, was at its worst when he believed that he was completely alone is realizing this bleakness of the world; it was at its best when writing enabled him to feel that he could evade it, to give shape and profundity to his life. In popularity, it seems like he found that the two began to frighteningly overlap. He worried that, should he give the chaos too much shape, make his art all the more digestible to the public, that it would become just another feel-good cog in the gratification machine.

We don’t have to stretch too far to imagine what Wallace might think of life writing or biography. I don’t actually even want to imagine what Wallace would have made of Although Of Course You End Up Becoming Yourself’s many weeks on the bestseller list. “I’ve done enough of these things,” he tells Lipsky when they sit down for their first interview, “to know that you’re just going to do whatever you want.” Running through the film is the fact that Lipsky has been dispatched—Lipsky’s editor yells, “There better be a story there!”—to investigate rumors of Wallace’s heroin abuse. Though Wallace maintains that, despite other substances, he was never addicted to heroin, the implication is that Infinite Jest would be an even juicier novel if it came out of lived experience. For Wallace, whether you believe he was a heroin addict or not, that added slickness would only have made the gargantuan book go down easier, made it all the more easy to make sense of, a notion antithetical to both Wallace’s aesthetic principles, and to the reality of his “story”: a swirling set of psychological, intellectual, and emotional conflicts, grave and complex, and—at their most terrifying, for him—entirely devoid of meaning. To write about Wallace in order to reduce him, even if it comes out of a desire to know him, to love him, to be him, as Lipsky desires, ties him down with the same tools that he used to feel free.

In 2001, Wallace wrote to Don DeLillo, “I do not know why the comparative ease and pleasure of writing nonfiction always confirms my intuition that fiction is really What I’m Supposed to Do.” The many temptations toward ease and pleasure in writing, ostensibly, in the realm of the real are enumerated in The End of the Tour’s strange confluence of types of nonfiction profiling. Certainly, when Wallace is reduced to a listing of items in his ranch house, and, at the very end, when Lipsky’s reading is cut with visions of Segel as Wallace, dancing cloyingly in a church hall, there is an overwhelming turn to pathos rather than an appeal to our critical faculties, or a real confrontation of the disturbing finality of the loss of Wallace.

The lively conversational sparring of Lipsky and Wallace in the beginning of the film, though, and their bizarrely intimate confrontations surrounding how to be men and how to write, offer another kind of pleasure—one that is simply found in what actually happened. Not that good life writing can’t ever take place, or that records should be regarded as art in and of themselves. But the best kind of biographical work occurs not in competition, but in coordination with the subject, and, accordingly, that knowledge comes from Wallace: as the credits roll, Wallace, in a reversal, finds himself alone with Lipsky’s tape recorder, reminding us that he was really there.

To win passes to the movie, click here (not a trap). 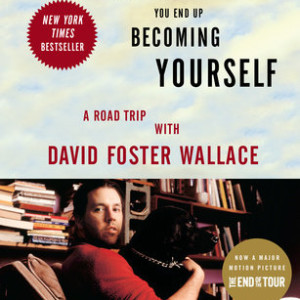 If writing had a logo, it’d be the anchor, the quicksand easy chair, but from the minute I shook David’s hand we didn’t...
© LitHub
Back to top