Dark Constellations Imagines a Dystopia That Might Already Be Here

Forthcoming from Soho Press in April 2019, Pola Oloixarac’s second novel, Dark Constellations, investigates humanity’s desire for knowledge, control, and evolutionary advancement from three different perspectives, woven together throughout three time periods: the Canary Islands in 1882, Buenos Aires in 1983, and Bariloche, an Argentinian techno-hub, in 2024. Oloixarac is in conversation with her editor at Soho Press, Mark Doten.

Mark Doten: Can you give us your impressions of the cover, designed by Michael Morris? What did you think when you first saw it?

Pola Oloixarac: I loved it instantly. A pixelated bouquet of disturbed flora and a staring eye, devoid of a lid, made me think the lids are what make the eyes human. Our capacity to shut off the world. Otherwise, it’s a pretty disturbing machine. The cover is very orchidaceous, even if there are no orchids. It’s dark and sexy, I’m thrilled to know it will soon become a thing I can touch and smell. 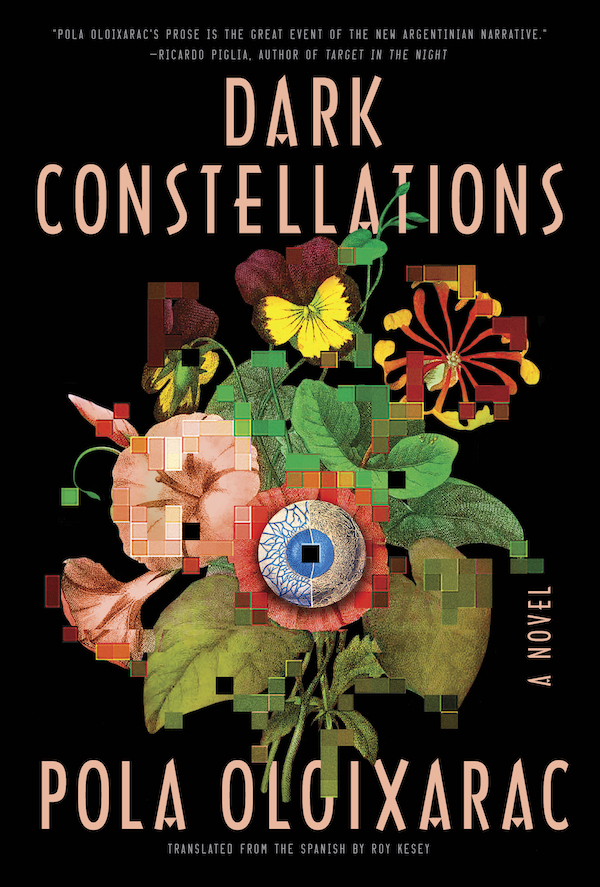 MD: This book was published in Spanish in 2015; I don’t want to give too much away, but it’s about a transformation in human life and civilization brought about by distributed networks, mass surveillance, anarcho-capitalists, and a “Ministry of Genetics.”  Since you wrote it, big data, surveillance, social media—the internet, to put it very broadly—has reshaped the global order, or brought the massive changes that had already been wrought by the internet to a new level of geopolitical disruption. Dark Constellations is a prescient book, and I wonder how conscious you were at the time that we were approaching some sort of tipping point with the internet and society?

PO: I was writing the book during the peak of Argentine populism, when the monologue of the State took over people’s lives. It was like it was not possible to lead civil lives anymore: the State commanded your attention to its daily minutiae, in pretty much the same way Trump is doing now in the US. The protectionist, nationalist discourse was combined with the omniscient presence of daily life technology, creating an intimacy with your thoughts that broke friendships and even families in Argentina.

By then I realized we had never really entered “la societé du control,” as Deleuze posed it: we were still in Surveiller et punir (Foucault). We are so used to practicing surveillance and punishing each other that it’s completely normalized—in media lynchings, in the practice of online seduction and deception, etc. We are all measuring our conduct to a molecular level, and many times even conversations about food are that, stating proof of the purity of what’s lurking down our very innards. My microbiome proves my moral stance on the world, I’m a perfect continuum between inside and outside. And when the State commands and takes over, you may feel the call the way Ernst Junger felt it. A decorated soldier of the First World War, Junger wrote piercing accounts of the emergence of Nazi Germany—he was even part of the SS, salvaging works of art in occupied Paris. Junger speaks of the need to bush-yourself, escape to the bush, eliminate yourself from the State equation. That’s what the characters try to do in the book, hack the State. The State is a living technology that, at particular times, only wants to grow into your ears and eyes and parasite your thoughts and innards.

MD: Twenty years ago, people dreamed of the emancipatory possibilities of an open internet—is that dream gone? Or perhaps I should ask: how screwed are we right now?

PO: The tide has turned for the internet lords. Harvesting our data has become the new source of value and wealth for the military industrial complex, they can’t disguise as cute, entertaining and transparent anymore. But since the internet began in the Cold War years as a military strategy to make information less vulnerable in the event of a nuclear attack (one of the birth theories surrounding Arpanet), it was always hard to believe that a military technology would become the safe playground space for millions, without an ulterior motive.

MD: I love the idea that you allow movement and growth from one translation to the next, doing some surgical rewrites of the text as it goes into new languages. It’s an idea that I think would scare some authors, or people who believe in “final” and “authoritative” texts; but not you: the German translation was different from the Spanish, and the English translation will be different from both. Can you talk a little about what new materials English-language readers can expect in Dark Constellations, and why you included them?

PO: It’s irresistible. On one hand, I just can’t resist the fantasy that I’m writing in English, but more like surfing on it, without the hard work—the translated draft by Roy [Kesey] is there and I glide over it, making sure that it flows but not like a corrector, more like a surfer, because I want to test drive the breeze, flow and air of the text, its nuances and movement. And also, I find the idea of final and authoritative laughable. I published the book in 2015, and in 2016 Wired magazine reported on a malware infection on human DNA—which once again shows that, with technology, if it’s doable it will be done. As per the new materials, I just updated the hack to make it feasible with cryptocurrencies, which is where the real trove of treasure money lies for hackers now.

Pola Oloixarac studied philosophy at the University of Buenos Aires. In 2010, Granta named her to its list of Best Young Spanish Novelists. Her writing has appeared in The New York Times, The Telegraph, Rolling Stone, Revista Clarín and Etiqueta Negra. She currently lives in San Francisco, where she is at work on her third novel.

Mark Doten’s novel Trump Sky Alpha is forthcoming from Graywolf Press. He is the author of a previous novel, The Infernal, and was named to Granta’s once-a-decade “Best of Young American Novelists” list in 2017.  He is the executive literary fiction editor at Soho Press and teaches in Columbia University’s graduate writing program. He lives in Princeton, NJ with his partner, Paul Nadal.

The Ripple Effect of Death in a Hotel

On the Limits of Biofiction: Bethany Layne Talks to David Lodge 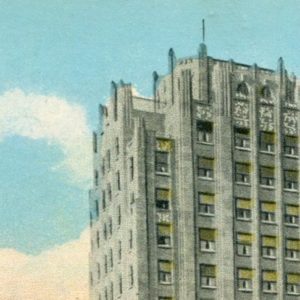 The Ripple Effect of Death in a Hotel Content warning: this article explores in detail suicidal ideation and methodology. In 1912, the Washington Post reported...
© LitHub
Back to top
Loading Comments...