Trying to Survive at the Edges of the Post-Apocalyptic World

Scroll down for a look the cover of Trashlands, the forthcoming novel by Alison Stine, and read the first chapter.

A few generations from now, the coastlines of the continent have been redrawn by floods and tides. Global powers have agreed to not produce any new plastics, and what is left has become valuable: garbage is currency. In the region-wide junkyard that Appalachia has turned into, Coral is a “plucker,” pulling plastic from the rivers and woods. She’s stuck in Trashlands, a dump named for the strip club at its edge, where women dance for an endless loop of strangers and the club’s violent owner rules as unofficial mayor. Amid the polluted landscape, Coral works to save up enough to rescue her child from the recycling factories, where he is forced to work. When a reporter from a struggling city on the coast arrives in Trashlands, Coral is presented with an opportunity to change her life. But is it possible to choose a future for herself? 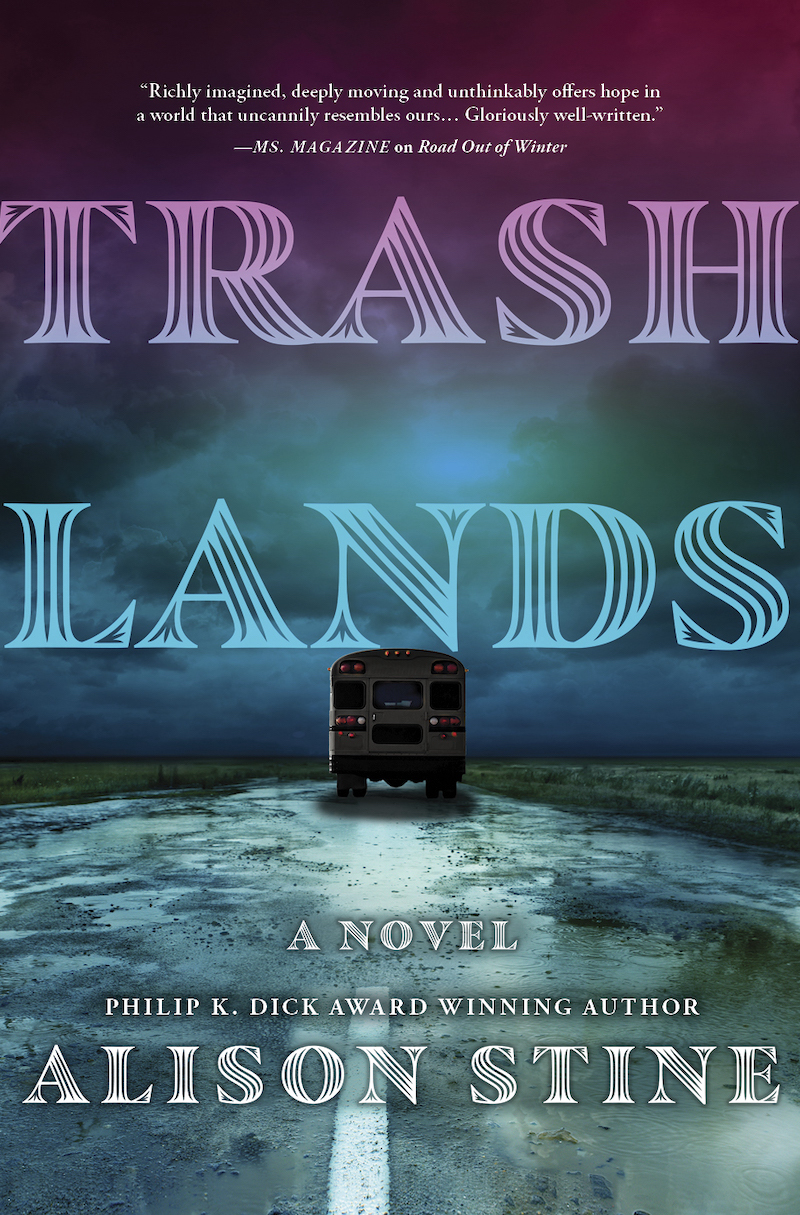 Coral was pregnant then. She hid it well in a dress she had found in the road, sun-bleached and mud-dotted, only a little ripped. The dress billowed to her knees, over the tops of her boots. She was named for the wildflower which hadn’t been seen since before her birth, and for ocean life, poisoned and gone. It was too dangerous to go to the beach anymore. You never knew when storms might come.

Though they were going—to get a whale.

A boy had come from up north with a rumor: a whale had beached. Far off its course, but everything was off by then: the waterways, the paths to the ocean, its salt. You went where you had to go, where weather and work and family—but mostly weather—took you.

The villagers around Lake Erie were carving the creature up, taking all the good meat and fat. The strainer in its mouth could be used for bows, the bones in its chest for tent poles or greenhouse beams.

It was a lot of fuel for maybe nothing, a rumor spun by an out-of-breath boy. But there would be pickings along the road. And there was still gas, expensive but available. So the group went, led by Mr. Fall. They brought kayaks, lashed to the top of the bus, but in the end, the water was shallow enough they could wade.

They knew where to go because they could smell it. You got used to a lot of smells in the world: rotten food, chemicals, even shit. But death… Death was hard to get used to.

Some of the men in the group—all men except Coral— had respirators, painter’s masks, or medical masks. Coral had a handkerchief of faded blue paisley, knotted around her neck. She pulled it up over her nose. She had dotted it with lavender oil from a vial, carefully tipping out the little she had left. She breathed shallowly through fabric and flowers. Mr. Fall just had a T-shirt, wound around his face. He could have gotten a better mask, Coral knew, but he was leading the crew. He saved the good things for the others. She was the only girl on the trip, and probably the youngest person. Maybe fifteen, she thought. Months ago, she had lain in the icehouse with her teacher, a man who would not stay. He was old enough to have an old-fashioned name, Robert, to be called after people who had lived and died as they should. Old enough to know better, Mr. Fall had said, but what was better, anymore?

Everything was temporary. Robert touched her in the straw, the ice blocks sweltering around them. He let himself want her, or pretend to, for a few hours. She tried not to miss him. His hands that shook at her buttons would shake in a fire or in a swell of floodwater. Or maybe violence had killed him.

She remembered it felt cool in the icehouse, a relief from the outside where heat beat down. The last of the chillers sputtered out chemicals. The heat stayed trapped in people’s shelters, like ghosts circling the ceiling. Heat haunted. It would never leave.

News would stop for long stretches. The information that reached Scrappalachia would be written hastily on damp paper, across every scrawled inch. It was always old news.

The whale would be picked over by the time they reached it.

Mr. Fall led a practiced team. They would not bother

Coral, were trained not to mess with anything except the mission. They parked the bus in an old lot, then descended through weeds to the beach. The stairs had washed away. And the beach, when they reached it, was not covered with dirt or rock as Coral had expected, but with a fine yellow grit so bright it hurt to look at, a blankness stretching on.

Coral looked at him, but the others were listening, knotting plastic laces around their necks, stuffing socks into pockets.

“Go on, Coral. It’s all right.” Mr. Fall’s voice was gentle, muffled by the shirt.

Coral had her job to do. Only Mr. Fall and the midwife knew for sure she was pregnant, though others were talking. She knew how to move so that no one could see.

But maybe, she thought as she leaned on a fence post and popped off her boot, she wanted people to see. To tell her what to do, how to handle it. Help her. He had to have died, Robert—and that was the reason he didn’t come back for her. Or maybe he didn’t know about the baby?

People had thought there would be no more time, but there was. Just different time. Time moving slower. Time after disaster, when they still had to live.

She set her foot down on the yellow surface. It was warm. She shot a look at Mr. Fall.

The surface felt smooth, shifting beneath her toes. Coral slid her foot across, light and slightly painful. It was the first time she had felt sand.

The sand on the beach made only a thin layer. People had started to take it. Already, people knew sand, like everything, could be valuable, could be sold.

Coral took off her other boot. She didn’t have laces, to tie around her neck. She carried the boots under her arm. Sand clung to her, pebbles jabbing at her feet. Much of the trash on the beach had been picked through. What was left was diapers and food wrappers and cigarettes smoked down to filters.

Down the beach they followed the smell. It led them on, the sweet rot scent. They came around a rock outcropping, and there was the whale, massive as a ship run aground: red, purple, and white. The colors seemed not real. Birds were on it, the black birds of death. The enemies of scavengers, their competition. Two of the men ran forward, waving their arms and whooping to scare off the birds.

“All right everybody,” Mr. Fall said to the others. “You know what to look for.”

Except they didn’t. Not really. Animals weren’t their specialty.

People had taken axes to the carcass, to carve off meat. More desperate people had taken spoons, whatever they could use to get at something to take home for candle wax or heating fuel, or to barter or beg for something else, something better.

“You ever seen a whale?” one of the men, New Orleans, asked Coral.

They approached it. The carcass sunk into the sand. Coral tried not to breathe deeply. Flesh draped from the bones of the whale. The bones were arched, soaring like buttresses, things that made up cathedrals—things she had read about in the book.

Bracing his arm over his mouth, Mr. Fall began to pry at the ribs. They were big and strong. They made a cracking sound, like a splitting tree.

New Orleans gagged and fell back.

Other men were dropping. Coral heard someone vomiting into the sand. The smell was so strong it filled her head and chest like a sound, a high ringing. She moved closer to give her feet something to do. She stood in front of the whale and looked into its gaping mouth.

There was something in the whale. Something deep in its throat.

In one pocket she carried a knife always, and in the other she had a light: a precious flashlight that cast a weak beam.

She switched it on and swept it over the whale’s tongue, picked black by the birds.

She saw a mass, opaque and shimmering, wide enough it blocked the whale’s throat. The whale had probably died of it, this blockage. The mass looked lumpy, twined with seaweed and muck, but in the mess, she could make out a water bottle.

It was plastic. Plastic in the animal’s mouth. It sparked in the beam of her flashlight.

Coral stepped into the whale. 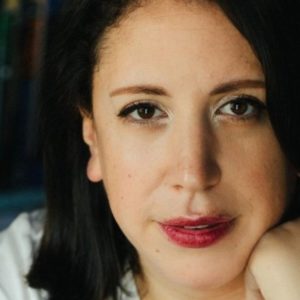