Cory Doctorow: Why Our Current Tech Monopolies Is All Thanks to Ronald Reagan and Robert Bork

On today’s episode of The Literary Life, Mitchell Kaplan is joined by Cory Doctorow to discuss his latest book, Chokepoint Capitalism: How Big Tech and Big Content Captured Creative Labor Markets and How We’ll Win Them Back, out now from Beacon Press.

Cory Doctorow: On the one side of this hourglass shaped market, you’ve got the creators and on the other side you’ve got the audience. And in the middle you’ve got this pinch. And at the pinch is a company like YouTube or the four big publishers or the three big record labels or Facebook or the one national book distributor or the one national music theater chain or the three record labels. And as you pass through that pinch, as you pass through that choke point, whatever it is you’ve been given to protect your rights gets taken away from you as a condition for passing through it. And so when you think of it that way, giving creators more copyright in the hopes that it will get them more money from their labor is like giving your bully kid more lunch money in the hopes that it’ll someday buy him lunch, right? It doesn’t really matter how much lunch money you give your bully kid, the bullies are going to take that too. In fact, even if the bullies go out and launch a nationwide campaign on behalf of America’s hungry schoolchildren to get more lunch money, it’s still not going to help. In fact, once the police have enough lunch money, they’re going to pay off the principal. And so we need to do something that gets the bullies out of the school year to do something that affects a structural change, right. Not just a right that you can nominally exercise, but a right that you can practically exercise.

A way to shift value from one side of the ledger to the other, from the side of the ledger belonging to large corporations to the side of the ledger belonging to the workers who produce the material that those large corporations sell and market and distribute. So as we kind of worked through this, we noticed something funny that while there had been a point early on in the Napster wars, when the record labels were clearly the villains of the story, after all, those were the companies that had done deals with the Beatles, where for every LP they sold, they got $0.01, but not the whole cent. 15% of it was retained for a marketing expense. And then they had to share the remaining 85% of a penny for ways after paying their manager to his 10%. Those labels were clearly in the wrong, right? We were in the era of digital sales. And those labels were attracting a line item off of every royalty statement that every artist who had a record deal was getting for breakage. Now, breakage is a line item on royalty statements that dates back to when shellac records used to break in the truck between the factory and the record store. And they were taking it out of artists royalties, right? So if you’re an accountant, you may know that the generally accepted accounting practice, the name for that line item is Fuck You, that’s why. And so it was very clear that these guys were the bad guys.

Now, Napster may not been the good guys. I mean, they were just they were moving fast and breaking things. But there were companies like YouTube coming along and other companies that were providing ways for musicians to directly reach their audiences and that were offering them a better deal. But as time went by, companies like YouTube were able to extinguish all of their competitors, become the only game in town. And then the deal that they offered to the recording artists was functionally equivalent to the deal that the record labels had been offering to them, that it wasn’t like on the one side you had mustache twirling villains, and on the other side you had good natured slobs. You just had on either side people getting what they thought they could get based on the negotiating leverage that they had at the time.

You know, it’s like that final scene in Animal Farm —and forgive me for the spoiler for the seventy-year old George Orwell novel—but it’s the final scene in Animal Farm, the animals who fought a revolution against the man and have been betrayed by their leaders and the pigs gather around the farmhouse where the pigs are eating with the farmers who they made peace with. And they look from the pigs to the men and to the pigs, and they can’t tell the difference. What’s the difference between a YouTube executive and a Warner Music executive these days? They both have the same approach to the talent that makes up their work.

And so the question is, how do we get to this place? How do we get to this place where the Web has turned into five giant websites filled with screenshots of text from the other four? What are the structural factors that produced this market where we have three record labels, four major publishers, one major book distributor, one e-book seller? How did we get here? Well, it starts as so many of our terrible stories do with Ronald Reagan. Actually, it starts a little before Reagan. It starts with a guy who was kind of Reagan’s court sorcerer, a guy named Robert Bork. Robert Bork was a noted jurist, although if you’ve heard of him, you probably know about him because you’ve heard the term Borked, which comes down to us from the time that Reagan tried to put him on the Supreme Court, and his confirmation hearing went so horribly badly that we now have a adjective to describe something that goes very badly. We call it Borked. Bork had been Nixon’s solicitor general, and among his many weird and colorful things, he had a weird conspiracy theory about how antitrust law in America was supposed to work. So antitrust law in America has these three foundation laws. There’s the Sherman Act, there’s the Clinton Act, there’s the Federal Trade Commission Act. And the lawmakers who passed these acts were really clear about what they wanted from antitrust in America. Robert Sherman stood on the floor of the Senate in 1890 and said, If we would not allow a king to rule over us, we should not allow an autocrat of trade to organize our lives and all the things that are important to it. They all viewed the purpose of of anti-monopoly regulation to stop companies from gaining so much power that they could control the way that you lived your life, not just raise prices on you. Obviously, that’s a thing a monopoly can do that harms you, but also becoming the only player, an employer, in town, making life worse for everyone who lives in that town, or becoming so important to our political process that they can pollute or do other things that harm all of us with impunity, to be able to distort our lives in ways that make them completely unaccountable, to be the autocrats of trade.

Cory Doctorow is a bestselling science fiction writer and activist. He is a special advisor to the Electronic Frontier Foundation, with whom he has worked for 20 years. He is also a visiting professor of computer science at the Open University (UK) and of library science at the University of North Carolina. He is also a MIT Media Lab research affiliate. He co-founded the UK Open Rights Group and co-owns the website Boing Boing. He is the author of more than 20 books, including novels for adults and young adults, graphic novels for middle-grade readers, picture books, nonfiction books on technology and politics, and collections of essays.

Does Self Require Us to Be Selfish? How Setting Boundaries in Our Relationships Can Set Us Free 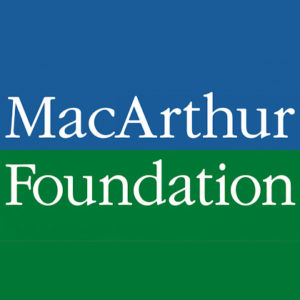 John D. and Catherine T. MacArthur Foundation has announced the 25 recipients of its 2022 fellowships (colloquially known...
© LitHub
Back to top