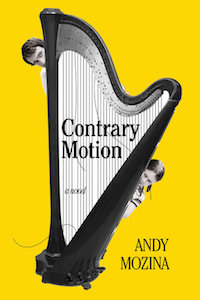 The following is from Andy Mozina’s novel, Contrary Motion. Andy Mozina is a professor of English at Kalamazoo College and the author of the short story collections The Women Were Leaving the Men, which won the Great Lakes Colleges Association New Writers Award, and Quality Snacks, which was a finalist for the Flannery O’Connor Prize. He lives in Michigan with his wife and daughter.

At the wake, my family forms a long receiving line, a bucket brigade of grief, passing mourners toward my father’s casket. The queue stretches out the door of the capacious viewing room, which seems to energize my mother, who asks about the people paying respects as much as she accepts condolences.

Afterwards, Tim heads out, ostensibly to return to his hotel room but more likely for a mini-mart tour to indulge his romantic compulsions, while Emily and her family retire to two of the upstairs bedrooms at my mother’s house, where Audrey and I are also staying. As everyone else sleeps, I wander the house like a squirrel: moving abruptly to look at a picture on the wall, nibbling on some food, pausing, stepping up to a window, scratching my face with two hands, rising on my toes, listening.

Eventually, because I can’t help myself, I approach the converted bedroom where my father died. Someone has pulled the door shut, but I turn the knob and the hollow brown wood door swings open to reveal a sewing table and a very old exercise bike. The post lamp on the front lawn casts upslanting light through the window, like a rising sun, spraying the tops of a few bookcases. The house is so quiet I can hear the dull roar of trucks and cars on I-94, which runs behind the houses across the street, the suburban version of oceanside surf. Across the room, green LED letters on the Goodwill stereo indicate that the CD player is engaged and disk one is still cued up.

I turn on the lamp by the reading chair. On the floor at my feet is the blue exercise mat on which my father had his heart attack. Beneath this is a shag carpet in shades of green. These may have been the last square yards of sincere shag installed in the United States.

At dinner, my mother went on to reveal that my father had brought home doughnuts again on his final day. They had stopped for skim milk and ground turkey and bananas at Jewel after church, but with these cheap and healthy items acquired, my father had directed the cart toward the bakery. She had dutifully stood by him, protesting only in a restrained way while he ordered his half-dozen Boston creams. But when they were home and Dad had eaten one and then started on a second, things had flared up, though she could not bear to tell us what she had said. I imagine it was something along the lines of my dad being a stubborn, hard-to-live-with fool who constantly complained but didn’t know what was good for him, which was a thread of criticism that unified their fights. Whatever it was, it made Dad smash the remainder of that doughnut plus the box with the four other offending pastries into the trash can, an act which took the argument to a whole new level.

Yet by the end of the fight my father had somehow agreed to try meditation instead of doughnuts to manage his fears about the upcoming cancer-on-ice procedure. For all of his anger, the man was never beyond giving in. But there are sacrifices that heal and sacrifices that are more like suicide bombings, designed to hurl shrapnel at loved ones. And it was probably the resentment and anger buried in this agreement that made him try meditating immediately, while he was still riled up. My mother, in her busybody way, was curious about whether he had “a nice meditation,” so after she heard through the door that the voice on the CD had stopped, she knocked, entered, and found him—right at my feet.

I will not lie on the exercise mat of death, but I can’t stop myself from reaching over and pressing “play.” A sensitive male voice comes on, soothing but too loud: “Welcome to Part 1 of the stress reduction and relaxation pro—” I turn down the volume, close the door, and turn off the light for good measure.

I settle into the reading chair, and the voice goes on to assure me, as he did my father: “You are assuming an active and powerful role in improving your health.” He invites me to think of this meditation as “a nourishing time, a time you deserve to give yourself some positive energy and attention.” But even these words could have been an affront to my father because they imply you need help.

“In doing work of this kind,” the voice continues, “it’s important to remember not to try too hard to relax. This will just create tension.” There: a note of accusation, of judgment. But then the voice rights itself and begins to narrate a meditation exercise. He asks my father to breathe with his toes. Then the bottoms of his feet. The tops of his feet. His ankles.

When he gets all the way up to the thighs, an eerie wind stirs in my head, maybe a ghostly aftershock of my father’s passing in this very place, listening to these very words: it suddenly seems clear that by this moment in the CD my father was already gone. He must have known that he was trying too hard to relax, that he would always try too hard—even after the voice had warned him not to!—and this in turn would have produced more tension, creating an infinitely reinforcing stress loop, until my father had his final paroxysm.

This is what I imagine my father thought because I am his son.

I think I should cry now, and my throat muscles tighten, and I have a strange facial event during which I seem to chew the air, but then the feeling rumbles away like distant dry thunder.

I wish I could sell this version of events to my mother, to convince her that he died battling his demons, not her, but my intuitions rarely register with others, and I’m reluctant to trespass on her grief. People’s emotions are just a series of flooded streets criss-crossed with downed power lines, and I try not to walk there. He was my father, but he was her husband, and she will want to own why he died as much as she wants to preside over the lives of her children.

I sit in the dark for another few minutes, listening to the calm instructions, wondering which of these words were actually the last my father registered. Then I imagine I hear my mother’s slippers whispering toward me across the shag. I stop the CD, quickly leave the room, and close the door before she can find me here.

At the funeral mass, I play crushingly sad tunes at prelude time: “Clair de lune,” “1st Gymnopedie,” “Moonlight Sonata.” I should be missing notes through my tears, buzzing strings, eventually tipping over the harp and running from the room with my hands over my face. But no. Like an anorexic who brings rich desserts to the picnic and smiles politely while others foolishly indulge themselves, I play with what feels like an expression of bland concentration, laying it on thick as scattered weeping breaks out in the congregation. Audrey stands in the third row of my siblings and their families. Whenever I catch a glimpse of her, she is looking down but I can’t tell if she is moved or bored.

After the mass, there’s a buffet lunch in the church basement. I slop some baked beans, potato chips, carrots, and a ham sandwich on my plate and sit on the periphery of my siblings and their spouses, not saying much. My brothers talk about home repair, and my sisters talk about each other’s kids. The only apartment dweller in the family, I express sincere amazement at the bathrooms remodeled and the drainage tiles laid. Everyone is pretty restrained. My guess is that there will not be the usual hands of Sheepshead when we land back at my mother’s house for another gathering after the cemetery. Audrey spends little time eating, and I let her hang out with a handful of cousins who eventually disappear, probably to run the halls of the school upstairs. Half-way through my chow, I dump my paper plate in a big trash barrel. Out in the corridor, I run into my brother George, who’s about six years older than me, exiting a restroom, self-consciously running a hand over his cue ball head.

In February, George finished nine months in Felmers Chaney Correctional Center, a minimum-security prison in Milwaukee, for insider trading in the shares of Joy Global, the company where he worked designing electric mining shovels. To make a new start and achieve “greater transparency,” he shaved off both his beard, and full head of hair.

“Could be worse,” he says. “I’ve got a lead on a job at Briggs and Stratton.”

“I’ve learned my lesson, man,” he says. “Total transparency from now on.”

“Not any more,” he says. “Not like our goddamn family.”

“Really. Look at the man who just died, our dear old dad. All the secrets.”

“Well, they must be pretty well-kept, because—”

“The hospitalization, man. The nuthouse.”

For a second, I wonder if he’s referring to his own incarceration in Felmers. “For Dad?”

“You were just a little shaver. Actually, it was right after you started playing the piano and Mom thought you were a genius. Anyway. Ancient history, well-suppressed by Mom. Don’t bring it up with her. She’ll freak. The secrets must be maintained or the fragile people crumble.”

Dad had some kind of nervous breakdown. Killer insomnia, night after night, and finally he just cracked. The man wanted to die. ‘Crisis of faith’ is Mom’s cover story. Was on serious meds for the rest of his life, I’m pretty sure.”

“He tried to kill himself?”

“That I don’t know for sure. He was on suicide watch at the hospital, I know that.”

I don’t know how to respond, so I run my right hand up and down the inside edge of my open suit jacket as if I’m playing a glissando.

“Look, I’m sorry, brother,” George adds. “This is the wrong time. I chose the wrong time.” But he says this last with a pinch of irony. “Now is the time to grieve.”

He pats me twice, heavily, on my shoulder.

“Our patriarch is dead,” he says soberly. “Long live Mom.”

From CONTRARY MOTION. Used with permission of Spiegel & Grau. Copyright © 2016 by Andy Mozina. 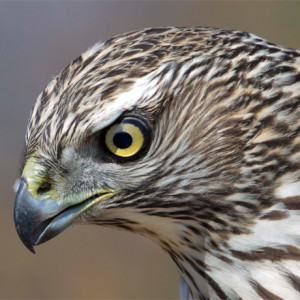 30 Books in 30 Days: Joanna Scutts on Helen Macdonald’s H Is for Hawk In the days leading up to the March 17 announcement of the 2015 National Book Critics Circle award winners, Critical Mass...
© LitHub
Back to top