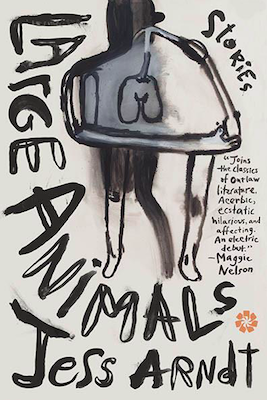 The following is from Jess Arndt’s collection of stories, Large Animals. This debut collection confronts what it means to have a body. The narrators in these stories challenge the limits of language & make room for the undefined, the nonconforming, the queer. Jess Arndt received her MFA at Bard and was a 2013 Graywolf SLS Fellow and 2010 Fiction Fellow at the New York Foundation of the Arts. She has written for Fence, BOMB, Aufgabe, and the art journal Parkett.

I was going to change everything. The feeling beat through me with its smothering pulse. I’d been waiting to change everything for an eternity, thirty-one years, a very long time. I was sure this meant what I was going to do would change very little. Still I could think of nothing else. I’d spoken to the surgeons—or at least one surgeon, a rising star with a Mad Hatter’s throne in his condo-ish waiting room. The chair spooked me.

Now I was going to do it.

As the date approached, my preoccupation grew. I’d purposefully trap myself sideways in empty windows or mirrors, trying to chase down the future me. I had no idea what to expect, except hopefully: Lothario, pleasure-seeker, and, of course, famous author, household name recognition, writing books that made not just people but their cells cry.

This period was full of lasts. Last time go to this or that restaurant or take the E train to therapy, last four a.m. car service in sway of alcohol-induced feelings, last optimistic but still shittily fitting shirt, last time to see so-and-so before the change. I was also having send-off conversations in my head. If I’m honest they mostly copied the one I’d already had with my therapist.

“Well, goodbye,” she’d said. “Next time I see you you’re going to feel so motherfucking free!”

I was embarrassed when she said it.

“Ta-da!” I’d said, bolting for the door. But it had become a model.

I went out to dinner with S. at Thai Me Up. We sat inside at a plastic outdoor table and drank tiny glasses of water. We had sheltered a heavy flirtation once and now it was settled but seeing each other still kicked up dust clouds.

S. was back with her ex and, as she put it, having the best sex that they could have, which left a little trapdoor swinging open. Staring over her perfect shoulder, I scanned all of the possible pitfalls, inadequacies, faulty equipment in their “dynamic” and plugged the data into a mental Excel sheet against mine.

Certainly I measured up (surpassed) in many ways—but there were other activities, behaviors, proclivities that, if I was radically fair, might not have favored me. I brushed them back. The fact remained, I was about to change everything—and who knew who might pop out on the other side?

Our food came and I sucked at my Thai iced tea like a jungle guide pulling out viper venom from a stump. Things had become very sharp. My actions were bolder and less tethered to anyone I had been or anything I had ever done. My body did not yet work better but I padded around in it as if it did, hoping people would notice.

A gosling surfaced in my stomach and shook its greasy head. I ducked down, my neck broiling. I looked at the well–mopped tile floor. Were my New Balance dirtied permanently? I wondered, or could I, with some soap and water, return them to like-new?

My hand was doing that flutter. I pressed down on the stem of my fork. Hurling it across the room felt like my only option—there was no way I could get the squirming tines up off the plate to my mouth.

That night I couldn’t sit still. My earlier behavior was not an example of how someone about to change everything  should act. I should make some calls, I thought. I pulled a half-finished Modelo from the fridge—someone had jammed a napkin in it—and scrolled through my address book.

The window was open, the elm leaves flipping up, showing off their white bellies. I stared across at the dark apartments and air conditioners from my position on the third floor opposite. For an instant I felt aware of a great resistance, something bigger than me. Night made me dissolute like drinking did. Put a stretchy space between my synapses—pushed on my legs or arms until there was no body, just black ether lapping at milky shores.

It was east to west so it was okay. One a.m.

“What do you want,” she said. She was at a party. Things crashed jovially in the background.

“I wouldn’t have picked up,” she said. “But I’d erased your number and thought you might be the pot dealer.”

I was only interested in calling people I had slept with or dated, people who if they knew I was about to change everything should want to give me send–off bon voyage and all that happy landing et cetera et cetera jazz.

With V. I was going very far back, but in my new accounting, it made sense that the women who had known me longest should have the most time to adjust.

“I’ve been thinking about giving a little send-off party,” I said. “or maybe I mean like a final viewing.”

“A what?” She seemed suddenly disattached from the phone. “No no, it’s not him,” she said.

“A final viewing. Before I change everything.”

“Are you doing a lot of drugs out in New York?” she said. “Diet pills? MDMA? Mushrooms? Glues?”

“You thought I was the drug dealer,” I said. “As in you called him.”

“A final viewing is what you give someone who’s dead,” she said. I heard glass breaking. “Are you dying?”

I opened another Modelo, gazing into the refrigerator’s chilly rib cage. When I was a kid it occurred to me that I might be a very corrupt person, a murderer even. Just the word, every time I thought it, gave me a hot little shock. one day the knowledge was shoved between the other things I knew about myself—okay at soccer, desperate for sugar, a loner. I was nudging a body out to sea, as I had at sleepaway camp that famous summer when a decomposing shark washed up on the beach near our tents and all night it was my job to push the rubber flesh back against the tide with a board.

This terrible power made me shyer, more self-effacing. I was very concerned with keeping myself in check and performing the daily rituals that I manufactured so that others would be safe.

I described this one night to a girlfriend, T., who often let me get drunk and cry and rip up serviettes against this bar top or that bar top and tell her just these sorts of things. But she wanted to be a social worker so I didn’t feel too bad.

“What if the fantasy really had less to do with your capacity for destruction and more to do with saving everyone?” she said.

I didn’t know what to think. It was true that as soon as a “dark thought” occurred, I threw myself into the solution, eagerly murmuring words and moving objects around in  the dirt.

Her number wasn’t in my phone but after some digging, I pulled out an old journal marked “2000.” Just its battered face gave me the creeps. I extricated the number with tweezers,  three-thirty a.m. Central Time.

“Fuck you for calling so late,” she said. “You know we have kids, or you would know if you called more. Did you finish your book?”

“I gave it up,” I admitted, but she had already put down the phone.

I turned my receiver up to max.

I could hear all the way through their Chicago apartment. Their parquet floors and the hot breath of the babies next to them, their macaroni fingers clasping and unclasping.

I listened to them sleep awhile in the dark.

From Large Animals.  Used with permission of Catapult. Copyright © 2017 by Jess Arndt. 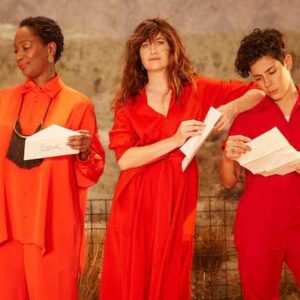 Talking to I Love Dick Co-Creator Sarah Gubbins Last week, Amazon launched its latest series, I Love Dick, amidst an overwhelming burst of internet publicity: fanfare,...
© LitHub
Back to top