Will Dillard, the narrator of my novel How to Survive a Summer, shares much in common with me: both of us are from Mississippi, and we are also from conservative, evangelical households, and we spent many years, perhaps too many, in graduate school. The most important difference between us is the circumstances surrounding how and when we came out. When I finally told my parents, I was 30, and the conversation took place over the phone. By then, the only thing they could do to me was take away their love, which—to my great surprise—they didn’t.

Will, however, was never afforded the privilege of coming out on his own terms. His father, a thoughtful but misguided Baptist preacher, suspected his son was “curious” since Will was a boy. When Will reached adolescence, it was made clear to his father what sort of man his son would become. In both characters’ estimations, Will’s illicit desires were a sickness, and he needed to be rehabilitated. When Will’s aunt appears in town, seeking donations for her new camp for boys afflicted with these same unholy desires, father and son treat the coincidence as a nothing less than divine intervention, and off Will goes to experience a summer that will irrevocably change the trajectory of his life. I began this novel from a place of truth, using details here and there from my own autobiography, but ended up exploring this nightmare scenario involving conversion therapy in part because I realized, through the process of coming out later in life, just how close I had come to living it.

I grew up in the rural hill country of Mississippi, in an area known as Possumneck, and spent much of childhood active in the Baptist church, a true believer. My summers were filled with vacation Bible school and youth group retreats and overnight mission trips to the nearby cities of Memphis and New Orleans. I was baptized when I was 12 and recommitted my life to Christ when I was 18, just before I left home for college. In junior college, I served as president of the small chapter of the Baptist Student Union, where I preached sermons on occasion. Many in my family were convinced I was bound for the ministry, including my grandfather, who said as much on his death bed.

I was devoted to my beliefs and understood on a primal level that the needs of my body did not square with the demands of the Holy Ghost. But queer urges are often rendered unspeakable and unfulfilled for so many of us in the religious South. I was woefully in denial. My attractions were clear to me, but I refused to connect them to an identity that, in my neck of the woods, got you harassed, beaten, or worse. I barely knew of ex-gay ministries at the time—it’s not something any of the churches I attended ever broadcasted, but there were whispers and rumors of boys and girls being sent away “to get help.” I never thought that sort of thing was meant for me, though, since I didn’t believe I was gay. This I could never admit, even in the privacy of prayer.

I’ve often wondered if this steadfast denial on my part wasn’t some kind of dumb luck, protecting me from the horrors I would later learn befell so many of my queer brothers and sisters. It makes perfect sense to me now that I would become a fiction writer, considering how much I lied in my youth. Living in the closet requires a nearly constant retreat from the truth, so no one suspects you are different, least of all yourself. You lie with more than your words, but with your whole body and mind: the lies manifest themselves in the way you walk and talk, the clothes you wear, even your interests and hobbies. For me, I tried and failed to achieve a specific kind of Southern masculinity my father and uncles and cousins exuded—a mud-riding, tobacco-chewing, deer-hunting manliness that reads as “straight” and “normal.”

After I moved away from Mississippi, I began to explore queer possibilities through my creative work. My short stories centered around gays living in the South, and all the complexities that arise from being queer in a less-than-hospitable locales. I’ve always been braver on the page, and it was through these writings that I finally found my own voice, not only as an artist, but also as a gay man. Before writing How to Survive a Summer, I did my homework on the practices of ex-gay ministries and conversion therapy. I researched places like Love in Action, which was so harrowing depicted in Garrard Conley’s beautiful memoir, Boy Erased, but I also unpacked the rhetoric used by several evangelical ministers, many of them you can find on YouTube. In doing so, I remembered a key aspect of conversion therapy that I had forgotten—that many proponents of this abuse sincerely believe they are doing the Lord’s work, that they are saving those of us in the queer community from a life of sin and misery.

This understanding was crucial in my depiction of Mother Maude and Father Drake, the founders of Camp Levi. Father Drake, in particular, became a revelation to me as I delved deeper into his character. In the book, his self-loathing and homophobia make him violent and abusive, someone who ends up an outcast in every sense of the word. If Will’s teenage years were an alternative account of myself and how I might have fared had I been outed as a teenager, then Father Drake was the man I could have become had I never come out at all.

It feels strange to have a novel about conversion therapy released at this moment in time. Once upon a time I worried about my depictions of physical and emotional violence in the later chapters of the book. I wondered if readers would find those scenes hyperbolic and unbelievable. But in the past year, conversion therapy has resurfaced in the media in ways I could have never predicted, making such concerns almost moot, if not a little naïve on my part. Two months after Conley’s memoir was published, representatives from the Republican Party met to draft their party’s official platform, where they included language that tacitly supported conversion therapy.

In the fall, after Donald Trump took office, The New York Times reported on his vice-president’s troubling relationship to conversion therapy. A month ago, after a yearlong, undercover probe, ABC’s 20/20 devoted an entire show to the controversial subject, focusing on two teens who survived ex-gay ministries. Susan Cottrell of Freedhearts, an online support group for Christian parents of LGBTQ youth, claimed in this exposé that for every conversion camp uncovered by the news, “there are about twenty that nobody knows about.” This statement was chilling, but not necessarily unexpected. And if the reports of belt lashings and cattle prods are any indication of what could be out there, then my novel’s violence may turn out to have nothing on the real thing.

And whenever another story about conversion therapy crops up in the news, I am always shocked, outraged. Who isn’t? But then a darker, more complex response takes hold. I remember the person I once was and must contend with what he would have done 15 years ago, before he learned to accept his queerness as the gift that I know it now to be. Regardless of his parents’ response to his being gay, the boy I was would have demanded to be sent away to one of these places, perhaps one that would turn out to be far worse than anything I could have ever imagined in my book. Once there, he would have gladly broken his body a thousand different ways in the hope that he could be rebuilt again into something more pleasing to the god and the family and the place he had been born into.

I understand that my attraction to men was never the destructive impulse my faith would have had me to believe. Rather, the real destructive impulse that lies in my heart is this latent desire of mine to deny and destroy my queerness at any cost. I mistakenly believed the process of writing the novel would have exorcised this boy and his shameful feelings from my spirit. An impossible notion. After all, conversion therapy teaches us this much: there are limits to how much people can change, no matter how earnestly they may want to. Even as I write this, he lingers with me, the boy I was, ever the true believer, like a family member I don’t speak to anymore, but one who’s still very much alive.

Nick White is the author of HOW TO SURVIVE A SUMMER, out June 6 from Blue Rider Press. An Assistant Professor of English at Ohio State University and a native of Mississippi, he earned a Ph.D. in English from the University of Nebraska-Lincoln. His short stories have been published in a variety of places, including The Kenyon Review, Guernica, Indiana Review, Day One, The Hopkins Review, and elsewhere. 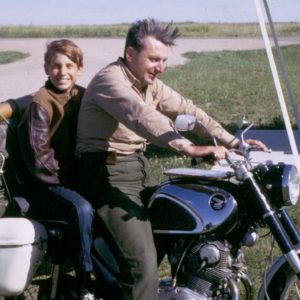 Motorcycle riding follows certain rules of physics that I don’t pretend to understand intellectually but that my body,...
© LitHub
Back to top