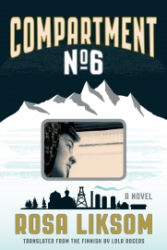 The following is from Rosa Liksom's novel, Compartment No. 6. Liksom was born in a village of eight houses in Lapland, Finland, where her parents were reindeer breeders and farmers. She spent her youth traveling Europe, living as a squatter and in communes. She paints, makes films, and writes in Helsinki. Lola Rogers is a Finnish to English literary translator living in Seattle.

A ruddy light pressed brazenly in through the compartment window and divided the space. The man’s bunk was left in shadow, the girl’s in light. The man was fiddling with his nose. There was no sign whatsoever of the effect of the nail polish remover. Two tussell-feathered sparrows pecked at the corridor window.

‘Arisa was here screaming about the engine needing a rest. So they’re giving it a rest. What do you think, my girl, shall we go out? Take a look at the vodka shops of Omsk?’ the man asked with solid self-certainty. ‘Not on an empty stomach, though. First munch on a little something and then hit the streets. Hurrying can kill you. Remember that.’

The icy fog on the platform seized their breath so that they had to stand still for quite some time. Two hungry, nimble-footed dogs were barking on the platform. The station yard was filled with the bustle of work and the noise of travellers, screeching train engines, rattling luggage carts, clanging rails, curses, roars, and old women’s uninhibited laughter. Among the stew of people a granny waving enormous mittens sold thick apple juice in large green bottles. The war in Afghanistan was accelerating and instead of food supplies the Soviet government was concentrating on arms production, and the girl hadn’t been able to find anything but condensed milk, tinned fish, and random jars of mayonnaise in the Moscow groceries. There were nothing but problems everywhere. The toothpaste problem, the soap, sausage, butter, meat, and ever-present paper problem, even a doll problem. When she took a trip to Riga for the New Year, she found tomato juice and a three-litre jar of jam in an out-of-the-way food shop and nearly killed herself hauling them back to Moscow. She and Mitka enjoyed them until March. They had exchanged them for ballet and concert tickets, champagne, all kinds of things.

They got into a bus that was waiting in front of the station with a little parrot squawking on the dashboard. The bus sighed, bellowed, and puttered towards the town at walking pace. The man dozed off, the girl scratched a little hole in the frost on the window with her fingernails to let the light in. She watched a startled flock of cranes fly grandly along the shore of the Irtysh and disappear among the tall, green-balconied highrises. The factory chimneys looked like minarets.

The bus sagged and swayed and nearly toppled over as it dodged a group of oil workers crossing the road. Farther off beyond the city spread an endless stretch of ancient snow-covered pine forest.

The bus stopped with a yelp in front of the remains of Tara gate, the man woke up, and they hurriedly got out. Next to the gate was a low brick building with Univermag written on its side. A loudspeaker hung from a rusty, bent nail on one end of the shop. It dangled sadly in the winter wind, shreds of the pastorale from Tchaikovsky’s Queen of Spades wafting around it.

In front of the shop entrance was a plain pine coffin lined with red silk. The edges of the coffin were decorated with black lace and on top of the lid was a bouquet of white and lemon-yellow carnations. Under the shop window was a snow-covered bench and on it lay a passed-out man with an accordion under his arm. They stopped at the coffin. The man took his hat off and made the sign of the cross. The shop door opened and a skinny old woman and four men with black crepe ribbons on the sleeves of their faded coats came out. The men picked up the white cloth sling, lifted the coffin off the ground and started walking towards the town centre. The funeral procession swayed down the slippery street, which was lined with a closely spaced row of electricity poles that looked like Orthodox crosses.

‘May his troubled heart rest in peace,’ the man said.

He wiped his brow as the procession disappeared behind a delicate mosque decorated with blue mosaics.

‘When I was a young man I got sent to work on the peat bogs. There was one hard-fisted, low-browed fellow named Mishka. We made friends, if that’s the right word for it. I never said a word to him, but we petted the same cat every evening … Then it happened that one spring night in the wee hours, Mishka died. Somebody put two iron nails through his head. I asked the boss if I could go with him on his final journey. Can’t do it, the boss said, the rules don’t allow it. I stood there and watched while they carried Mishka up the hill. The backside of the pure white horse was decorated with dried bits of shit as it pulled the old manure cart behind it. In the cart was a box made of planks, and in the box lay Mishka.’

The man and the girl stood there quietly for another moment before they walked into the grocery shop. Torn flowered oilcloth covered the little counter. On it were arranged tins of tea, tubes of lotion, vermicelli, cheap perfume, and belt buckles. There were bars across the low window. A red-handed cleaning lady slopped a wet, ragged mop.

‘Out. Can’t you good-for-nothing arses see that we’re cleaning here? Get out!’

Just as they were turning to leave, the shop assistant appeared from the back room, her enormous nose badly frozen.

The man cleared his throat. ‘No trouble here. Everything’s peaceful.’

The shop assistant glanced at the cleaner and waved her hand.

‘Varvara Aleksandrovna Pelevina, you may leave. The floor is fine.’

‘My Ninka, may I have a couple of bottles of pepper vodka and a bunch of onions?’ the man said.

‘But perhaps you have some … pepper vodka?’

‘How about a couple of mushroom pies and a bottle of mineral water?’

The shop assistant stared at him, surprised. Then she leered, swung her substantial rear end, and lifted a large bottle of clear liquor, a small bottle of Bear’s Blood wine, a back-up bottle of Bulgarian swill, and a bunch of onions from behind the counter.

The man laughed, took out a few notes and a pile of kopecks, tossed them quickly into the little plate, picked up the bottles and the onions, gave the shop assistant a long look, flicked his tongue over his dry lower lip, and walked out of the shop with a bouncy step, and even a whistle. The girl remained in the shop for a moment, but soon left when the shop assistant gave her an angry look.

They walked to the bus stop. The wind increased and the rough sky spat out stinging, bitter snow that gathered its strength from somewhere far away on the tundra and froze the swaying spruce branches.

A bus stinking of rot eventually came, and they quickly got on. The driver was a bloated middle-aged woman, crammed into a fur-lined overcoat, who smelled strongly of onion liquor. The cold had spread through the bus and frozen over the windows. Layers of clouds rushed across the dark sky and sliced through each other, now just above the edge of the forest, now far up in the highest part of the sky.

They got off the bus at the station square. The wind blew a tattered black burlap sack around the statue of Lenin. They trudged tiredly to a ramshackle ice cream stand in a corner of the station with a sign on the door that read Under refurbishment.

The bar smelled of Lysol. Puddles of milk lolled over the beautifully tiled floor; the leaking milk cartons lay in the corner. The station was crammed with people. The man drank a glass of vodka, wolfed down a pie, and said he was going to get on the train.

The girl ordered a mayonnaise salad and a dish of ice cream topped with chocolate-covered plums and two kinds of biscuits.

The mayonnaise salad was just mayonnaise, the biscuits stuck out of the ice cream like stalks of hay. She looked at the asters on the windowsill, sad autumn flowers sitting tired in a vase without water. The lower sky covered itself in dark lumps of cloud, the higher part in sea-blue fluff. A tram swished heavily past.

She ate her ice cream unhurriedly. The biscuits she left on the edge of the plate.

The man rubbed his knees as she stepped into the compartment. A Tchaikovsky romance played from the beige plastic speakers.

Omsk is left behind. A closed city. Weary old, good old Omsk, sucked dry by the taiga, abandoned by youth. The prison where the young outlaw Dostoyevsky lay dying is left behind. The lifeless copy of a statue of Dostoyevsky in manhood is left behind. The city of Kolchak’s White Guards is left behind. This is still Omsk: the lines outside the shoe shop, the tired land, the row of timber dachas faded grey. A lonely nineteen-storey building in the middle of a field, a five-hundred-kilometre oil pipeline, the yellow flames and black smoke from the oil rigs. Forest, groves of larch and birch, forest – these are no longer Omsk. A house collapsed under the snow. The train throbs across the snowy, empty land. Everything is in motion – snow, water, air, trees, clouds, wind, cities, villages, people, thoughts. 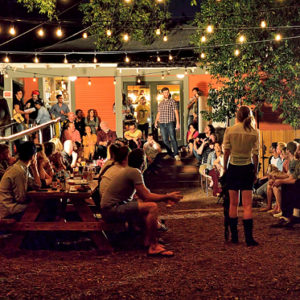