Chris Rush on Confronting the Ghosts of His Past

How a Painter Becomes a Writer

Writing a book was never part of the plan. My whole life I’ve been a painter. By three or four, I had a brush in my hand. Childhood was a wave of watercolors, tempera, and ink. For decades, without interruption, I made art. Then, at 50, out of nowhere, I started to write. My collectors, my galleries—like jealous lovers—told me to stop fooling around. But the words wouldn’t stop. For ten years I filled notebooks with what would eventually become a memoir. I had no idea what I was doing, or why—but a lifetime of painting had trained me to trust the unexpected.

As a kid, I drew constantly, lost in a kind of trance. In the beginning I copied comics, aped Warhol, sketched Rat Fink and Frankenstein. Making art was a way of mapping the world, of choosing which clues to follow. When I saw psychedelic art for the first time, in Life magazine, it seemed almost supernatural, like a message from God.

It was 1968. I was twelve years old, in a boarding school at a monastery. The good Catholic boy turned hippie, went wild. Soon I was dropping acid, sketchbook in hand. I tried to document the galaxies and amoebas multiplying in my head, imagining myself some kind of mad scientist.

Later, when puberty began, I discovered that hormones were even more powerful than LSD. I grew tall and swishy—realizing, with some horror, that I was going gay. Eventually, I was expelled from the monastery for kissing an older boy.

I returned home a deviant and a druggie. My father, a die-hard Catholic, was deeply offended by my girlishness: blousy shirts, long hair, the scent of patchouli. A war broke out. One night, he kicked in my bedroom door and threatened to destroy me. At 16, I was driven from the house, confused and humiliated.

It took me 45 years to tell the story of my exile.

In 1972, I headed west. My older sister was living in Tucson, with a clan of Christian pot smugglers. They happily took me in. I fell in love with Arizona, with the sharp scenery, the raging sun—a kind of x-ray light that saw through everything.

Months later, when my sister drifted back east, I decided to stay in Arizona on my own. I gave up on high school, camped out, hiked the high peaks. I was a wild child in the desert, dropping acid almost daily and painting feverishly. I drew fantastic landscapes, rainbow vortexes, and flying saucers lolling in the skies. I told myself I was on an artistic adventure.

I tried not to think of home, of my father, but most nights he still howled in my dreams. I recalled what my mother had said: You have to leave before he kills you.

I became a backpacker—this was my code word for homeless. I hitchhiked around, blurry with drugs, astonished by the beauty of the mountains, but I often had trouble keeping it together. Stoned and defenseless, I was not careful. One night, I ended up with a gun to my head—two cowboys threatening to kill me because they knew what I was.

After that, my letters home grew increasingly manic, filled with frantic enthusiasms, the margins crowded with angels and aliens. I was alone and slowly slipping out of range. Eventually, my younger brothers, Mike and Steve, drove to Tucson and found me living in an abandoned building. After an acid-fueled road trip through the West, they dragged me home.  I wasn’t well; standing beside my muscular brothers, anyone could see it. I was rail-thin, in ragged clothes too big for my body.

I became a backpacker—this was my code word for homeless. I hitchhiked around, blurry with drugs, astonished by the beauty of the mountains.

And so I returned, for a time, to the world of my father. I worked on one of his construction sites in New Jersey, though he refused to speak to me. I was lost, living in my parents’ basement, and soon found my way to cocaine and heroin. In September of 1976, high on China white, I drew a crucifixion scene in my sketchbook; a few days later, I OD’d and nearly died.

With a little saved money, I went back to Tucson, to a cheap rental near the Air Force base. I was determined to stop taking drugs. At 20, after having been stoned half my life, I was completely numb.

Crashing hard, I had no idea what to do, or how to live. It was months before I could even draw again. There were no fantasies left, no saucers in my skies, no magic elves. One morning, I decided to simply draw what was in front of me. I drew a cardboard box, then a boot. Sketched my right hand with my left. And then my left with my right. I took up again with the real. Over time, I drew a new life, got clean. Nothing was ever more difficult or more necessary.

At 25, I decided to study design and illustration at a school in New York. Soon after, I was hired as a designer at a prestigious jewelry firm. For a boy who once lived in the dirt, I was surprisingly good at decorating socialites.  Over the next ten years, I designed for celebrities and heiresses, but then, slowly, life went crazy. AIDS was overtaking the city, and people around me began to fall. Designing jewelry seemed pointless and vulgar.

Once, my drawings had been an attempt to discover the world, to follow the line wherever it took me. Now I was trapped at a desk, trying to sketch a diamond noose for a dictator’s wife. I fled New York.

I wondered if I could make it as a painter. In Tucson, I found an old adobe and filled it with books and blankets, mirrors and magazines. Played a lot of records, spilled a lot of paint. For the next 15 years, I went to my studio every morning. Locked my door and set my table. Put out paint and palette, prepared my panels, my sable brushes. As light poured in the window, colors rose and shadows fell.

When my father was dying, I went back east to see him. In a sunny room, I found a shrunken man, not the terrible tree who’d hung over my entire life. He barely spoke anymore, only a few words a day. As we sat on the couch together in silence, I handed him my portfolio. Gravely, he studied each portrait. He closed the binder and nodded. “I like them,” he said. “Very much.”

He had never said anything like this to me before. Stunned, I asked him if I could paint his portrait. For a long time he was quiet, and then he whispered sure.

I made the portrait quickly, with intuitive daubs of ash and violet—cerulean for his sea-glass eyes. As I stared at him, he seemed uncomfortable. I told him he looked great, asked him to maybe smile. Struggling to comply, his face was a grim contradiction. Pleasure flickered in his eyes and then faltered. His smile passed momentarily into a sneer, and then fell into a kind of terrible surrender, his lips slack over gray teeth.

Months after his funeral, I hung the portrait on my wall. The image disturbed everyone who saw it. When my mom visited and noticed the painting, she was confused at first.

I realized that, to her, my father was someone else—the love of her life. Looking at him, we could never see the same person.

For me, in painting my father, I began to see not only his guilt but also his pain.

After I made the portrait I thought: Finally, I’m finished with him. But the painting began to trouble me.  The picture on my wall was not the end of the story; it was a provocation.

I decided to write about the portrait. I was 50 and had never written much—some love letters, poetry, a few grant proposals. I’d rarely attempted anything so jagged and raw. I thought I would write a vignette about the process of painting my father, the history of an image. Carefully, I described the face ravaged by cancer, the terrible smile, the old man at the end of his life, rendered in ash and violet.

Then I wrote more. Wrote about what a devil he’d been when I was young, when I was weak and he was strong. Soon, my mother appeared on the page, the woman married to my enemy, who tried to save me but never could.

I told him he looked great, asked him to maybe smile. Struggling to comply, his face was a grim contradiction.

I filled notebooks, a hundred notebooks, stories sprawling in every direction. I began to realize that maybe I was writing a book: a story about my father, about fate and self-destruction, darkness and light—a canvas larger than I’d ever allowed myself.

But how does an artist write?

With great difficulty. The demands of writing are profound: the endless hours at one’s desk, the strands of thought that must be followed for months at a time. Luckily, I already understood the rigors of studio life. And, really, portrait making is much the same whether in oil or in words: find the details—find the character. Perhaps the difference is time. Who would be crazy enough to spend ten years on a single painting?

People often think it odd that a painter would write a book—especially in his fifties, and now, unbelievably, in his sixties. Whenever someone asks me if painting is different than writing, I often reply: I have one studio. I just work.

If I write blood red, is it any less red than if I paint it?

My father is dead. Throughout his life, he confided in no one—I will never know his thoughts. He was a shadow. But he remains a force in my daily life, as inescapable as gravity. Through writing, I found a way to consider his strange hold on me. In the book, my uncertainty is itself a force, an invisible moon pulling the story forward like water.

Father and son, death and time: I know I’ll never really understand these riddles. I’m an artist who has chosen to write what he cannot paint, cannot know. There are questions that have no answers. Yet aren’t these impossible questions what make us most human—the endless, hopeless, provocation of mystery? Learning to love what we cannot understand.

Chris Rush is an award-winning artist and designer, whose work is held in various museum collections. The Light Years is his first book. 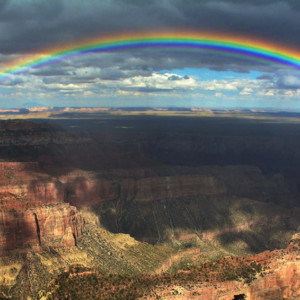 In winter 2018, I made a driving tour of the great national parks of Utah and Arizona. Places like Zion, Bryce Canyon, Arches,...
© LitHub
Back to top