Chasing the Brontë Sisters from South India to the Yorkshire Moors

Deepa Bhasthi on a Pilgrimage 20 Years in the Making

Haworth, set in the Yorkshire moors, is rife with the terrible clichés of the English countryside that were woven into the literature I grew up reading. There are rolling green meadows with sheep, curious horses and hearty cows dotting the view. A lazy sun falls upon the steep slopes of a farmhouse roof before a cold, swift winds and sudden rain. There is tea, lots and lots of warm tea, in dainty porcelain cups of well-appointed traditional homes.

It’s as English a village as I could have imagined while sitting in my own little village deep in South India, is also where the Brontë sisters—Charlotte, Emily, and Anne—lived for most of their brief lives. This tiny, otherwise nondescript village is also where they created their masterpieces, respectively, Jane Eyre, Wuthering Heights and Agnes Grey. The former two of these were among the first grown-up books I read, and I have carried their thoughts and ideas into my adult years. I have preferred Jane to Catherine Earnshaw, then the other way around—then haven’t cared for either in favor of some other heroine, and back and forth again—for as long as I have loved, and inhabited, the many characters I have read.

The bare bones of Brontës’ story are this: Charlotte, Emily, and Anne Brontë lived with their father Patrick, a curate at the local church, their brother, the ill-fortuned Branwell, and their aunt who filled in for a mother who died when the children were still very young. The adults largely left the children to amuse themselves, and this lack of supervision led to imaginations that were vivid and insightful; their minds traveled far beyond the boundaries of their village and the minor lives they were confined to. They would make up stories about soldiers and kings and imaginary kingdoms and write them in miniature hand-sewn books, in letters too small for anyone but themselves to read. The importance of the miniature in the Brontës’ lives was both a necessity owing to limited resources, one that resulted in diminishing eyesight, and a possible thwarting of unwanted adult attention. The Brontë sisters wrote most of their works around the dining table in the Parsonage, inspired by the long walks they were fond of taking in the expansive, all-consuming moors behind and around their home. Publishing first under androgynous names before they all publicly claimed their works under their individual, female identities, the novels they wrote were among the greatest of English literature of a certain period and place.

A slim volume of one of those get-to-know-this-novel-and-its-writer on Charlotte Bronte and Jane Eyre supplied these details to me, two decades ago. I remember a photo of the Parsonage in the book—it must have been taken just after a light shower. The greenery glistens, and the stone walls look like they could have held only happy secrets. The closely cropped image does not give away anything of what is around the house. I have carried the memory of this photograph with me, along with the mystery of what it did not show, for 20-something years now. Somehow, it seemed like this house was where all the answers would be.

My questions about the Brontës began in the small town of Madikeri, up in the hills of southern India where I was born and raised. The whole town is nestled at the bottom of a nearly round valley, with tall, green, imperfect mountains circling its corners. The district of Kodagu, of which the town is a part, is funnily enough, called the “Scotland of India,” a sobriquet from when the British took over and started the first coffee plantations there in the mid-1800s. The excessive rain, the verdant rolling hills, the dense impenetrable forests and the opaque mist that rarely parted would have reminded them of home.

Kodagu remains coffee country. We have words for our place-names in many languages, for this landscape that runs in the blood. But we do not have words for grey—grey weather, grey rain, grey hills. Moors and marshes are just as alien. The monsoons are hard, but desolation is incomprehensible. There is enough color to counter it in our kitchens, our wardrobes, our window views.

“My earth, my women, my colors and practices, my manners were different—outlandishly so—from that of the Brontës’ and what they wrote.”

In the 1990s, there was not a single bookstore in town. (There still isn’t.) But when my grandfather died, no one wanted his vast library, and I inherited it—even though I hadn’t been born yet. In those dark, antiqued bookshelves, many summers before I was meant to, I would meet and fall in awe and love with the Brontë sisters and the fiery women and brooding men they created. In a pre-Google world, reading their books opened a world that did not seem part of this earth. For my earth, my women, my colors and practices, my manners were different—outlandishly so—from that of the Brontës’ and what they wrote.

An English-medium education and a vast collection that could feed my voracious reading guaranteed that I read a lot of British literature, and a disproportionate number of Russian authors—all the mains, and then some. My choice of literature was really my grandpa’s; his tastes percolated into mine. His reading is where I met him at all. But of the array that he left to me, it was the Brontës that I kept returning to. Perhaps the love stories were desirable in my own hormone-raging teens. Perhaps the proto-feminism in them was buffing the ideas of feminism I had begun learning myself. Or perhaps it is because of what makes them such endearing classics—they are really just great literature.

Years later, I became something of a writer myself. I moved to London for just a few months last summer, and of course I fell in love. But I had a photograph of a house to seek and search for magic in.

In the notes I took during my trip to Haworth, I write that I am overwhelmed. It is a long way from the hills of southern India to the moors of Yorkshire, and not just in the geographical sense. The afternoon that I arrived, the sun struggled to come out, teasing with hints at what could be. Haworth is pretty, as quaint as a tourist destination that centers around literature can be imagined. And the Brontë association is milked everywhere, from jams and jellies named after characters, to the pubs where Branwell is supposed to have drunk himself into first oblivion and then death.

Walking up the famous steep main street of Haworth that is paved with setts, I landed before the church. Past a slim kissing gate, by the side of the church, past a school building where all the sisters taught and where Charlotte had her wedding reception, I walked to the Parsonage, which is now a museum. It is the house I grew up dreaming about, and it looks exactly the same. To describe myself as breathless from the steep climb alone would be too prosaic.

It was nearly closing time at the museum, but I rushed in anyway—the exteriors could wait—and zipped through the rooms, all meticulously decorated the way they would have looked when the Brontë family lived there. They are all simple rooms. Never ostentatious. Sometimes too close to frugal, but mostly just functional. It’s a regular house with bits and bobs, things and corners. But for us later day voyeurs, the old clock that the father wound every night on the way to bed, the kitchen corner where Emily would have baked the bread and kept house for the rest of the family, the dining table that bears an “E’ carved into it alongside ink blots and signs of wear, and these other mundanities gave futile glimpses into a brilliant family. Futile, I say, because materials do not impart or imbibe talent, yet here we had come to seek the genius in the material, as if, peering closely enough, we would find that which countless have searched for before us, and will look for after us: that elusive muse.

I stayed in a room at The Apothecary, a 17th C. building that has been variously used as an inn, a bookshop, a co-op, and a home for 400-odd years. The guest house overlooks the cobbled street: my biggest indulgence of the trip. The morning after my tour of the parsonage, I had to see the moors. I remember thinking that much as I would have loved some happy sunshine, it was more appropriate that the day was cold, windy, very grey, and wet. Suddenly, it did not matter that I could never, in my childhood, imagine what the moors looked like. When I did get here, they sure had put up a show.

I walked on trails that are, oddly, marked in both English and Japanese. A disproportionate number of Japanese devotees of the Brontë sisters visit Haworth every year—there are papers written about the phenomenon. The moors are vast; they stretched as far as my eyes could see. I struggled to associate it with a piece of the geography familiar from back home but could not find anything satisfactory. Desolate was the word that immediately came to mind. Though it sounds unsavory, the moors in shades of brown and green are full of something like emotion. Like the human condition, they seemed both a bit pointless and yet terribly resilient in their ability to inspire and influence.

And It rained. Oh, how it rained! I had aimed to reach Top Withens, that point that, despite repeated denials by the Brontë Society, fans of Wuthering Heights believe to be the inspiration for Emily’s picture of the Earnshaw house. But it was too cold to walk without cover from the fierce winds and the lashing rain. I admitted defeat, scurrying back to the guest house to buy a postcard of the ruins later at the gift shop. It was easier to brave the cobbled streets and pop in for a shot of local whiskey than to find myself feeling naked in the moors. The land wasn’t ready to give up her secrets just yet.

Buying souvenirs, taking pictures, sipping champagne-colored whiskey and peering into the enveloping mist was much easier. It was so safer than trying to process all that this visit meant. I was at the culmination of two decades worth of expectation. All that imagining, both of the trip itself and how this geography had influenced the Brontës’ literature, had come to a head. It was emotional and overwhelming—like reading the Brontës for the first time.

Deepa Bhasthi is a writer and independent journalist based in India. Her features, essays and journalism have been published in The Guardian, Himal Southasian, The Calvert Journal, Hyperallergic, and other publications. She was the co-founding editor of The Forager, an online journal of food politics.
http://dbhasthi.blogspot.com 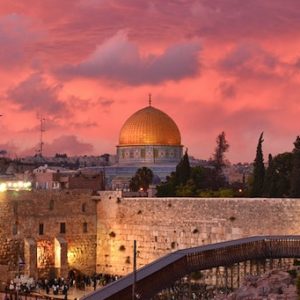 November 2 marks the centenary of the Balfour Declaration, when the British government famously promised to establish a Jewish...
© LitHub
Back to top