Charlotte Brontë May Have Started the Fire, But Jean Rhys Burned Down the House

Wide Sargasso Sea and The Limits of Bronte Feminism

In November of last year, Tin House published the text of a speech given by the author Claire Vaye Watkins, in which she spoke frankly of the various intersecting systems of privilege that affect the publishing world. Her main focus was the industry’s domination by men, their tastes and their interests, which even writers who are not men keep in mind when working toward literary success. The rousing essay ended with this call to arms: “Let us burn this motherfucking system to the ground and build something better.”

I thought of this speech this week, on the 200th anniversary of a famous literary house fire otherwise known as Jane Eyre—Charlotte Brontë’s novel about the eponymous “poor, obscure, plain and little” governess who quietly triumphs over several archetypal gothic adversaries: poverty, cruelty, a castle, a ghost, a brooding Byronic lover. Jane Eyre endures because it’s the story of an underdog, surely, as is the story of the author herself. Diminutive Charlotte and her sisters published their novels from their home in the Yorkshire moors, first under male pen names before being welcomed into important literary circles as women writers. Of Brontë, whose heroine notoriously requires the gruff, hot Mr. Rochester to regard her as a true partner before she will wed him, “equal—as we are,” Matthew Arnold complained in 1853: “The writer’s mind contains nothing but hunger, rebellion and rage, and therefore that is all she can, in fact, put in her book.” This, of course, is an excellent blurb for a novel in 2016, and cause to study Jane Eyre as a proto-feminist text.

There are other reasons that cultural objects get to hang around for multiple centennials, however, and rarely can a book’s radicalism alone account for its longevity in popular imagination. You might consider how Jane Eyre, not unlike the work of another famous but non-fictional Jane, in addition to being groundbreaking, is very safe. Jane E. might at first deny the hands of Rochester and her cousin St. John Rivers because they want to control her, but she does get married, eventually, all while maintaining her quiet dignity, her resilience, and her piety—meaning that her self-actualization is still in the service of morality, a Christian, patriarchal one. It is important to remember who exactly burns down the house in Jane Eyre, because it isn’t Jane. The arsonist of the novel is Bertha, Rochester’s shut-in wife, the infamous woman in the attic, and if a radical core can be found in Brontë’s work, it’s with her. Which is to say that the novel’s real potential for systemic annihilation is not the novel itself, and brings me to another anniversary, a 50th birthday, of Jean Rhys’s prequel to Jane Eyre: Wide Sargasso Sea, published in 1966.

There are other reasons that cultural objects get to hang around for multiple centennials, and rarely can a book’s radicalism alone account for its longevity in popular imagination.

Jane Eyre’s Bertha Mason does not speak in Brontë’s book, so what we know about her before Wide Sargasso Sea we know from Mr. Rochester and his brother-in-law, Mr. Mason. “The true daughter of an infamous mother,” Bertha is accused of alcoholism and adultery, bad behaviors that have progressed to madness in Jane Eyre. And she is Creole, the term used at the time to describe the white European planting class in Jamaica and other Caribbean colonies, although it could also be a catchall phrase to include people of mixed-race ancestry, too. In Jane Eyre, Rochester tells a pitiful story about being forced to marry Bertha (as a penniless second son, a victim of primogeniture) in Jamaica before taking her back to England, where the marriage devolved. Bertha is continually racialized by Brontë, her face described as dark, and her “blackness” coded in comparisons of her movements to those of a wild animal.

It’s easy to imagine Rhys zeroing in on Bertha when considering Jane Eyre around the time of its first celebratory centennial, when she began writing Wide Sargasso Sea. Rhys was born to Scottish and Welsh parents on the island of Dominica; she spent years roving around France drinking and carrying on with men as a chorus girl and mistress and nude model; she hated England. The first thing she did in her retelling of the novel was to change Bertha Mason’s name to the lyrical, flirtatious “Antoinette Cosway,” before beginning Antoinette’s own bildungsroman, like Brontë did for Jane.

Only, there are distinct postmodern formal innovations in Rhys’s work: told in three parts, it starts with Antoinette’s perspective, detailing her childhood under that “infamous mother,” named closely “Annette.” Part Two is narrated by Rochester, with whom Rhys truly begins her occupation of the original novel. The language he uses regarding his new wife and their circumstances is steeped in transactional terms, though he isn’t sure who exactly is in power between the two of them: “I have not bought her, she has bought me, or so she thinks.” Part Three is even more intimately related to Brontë’s mother text, as Sargasso returns to Antoinette’s perspective, though she is now living as the quarantined Bertha in Thornfield’s drafty attic. Told in dreams that mirror Jane Eyre’s, her narration becomes increasingly unraveled.

There’s more happening here than just revision, though—Rhys’s novel does not simply flesh out the characters in Brontë’s original work, change their fates, or explain their motivations beyond what Brontë offered. She actually intervenes in the very project of the novel and its imposing structure, exposing its historical limitations and its legacy as a product of empire and violence. She accomplishes that meta-text by setting up Antoinette/Bertha as a character caught between whole worlds, between dueling epistemologies, specifically a Western colonial and an Afro-Caribbean one.

Rhys’s decision to set the main action in Sargasso after the Emancipation Act of 1833 is deliberate, as it connects Antoinette’s quest for selfhood not to Jane’s but to the fate of the ex-slaves of the island. “Qui est la?” recurs as a question in Antoinette’s dreams, echoing the French patois spoken by her surrogate mother figure Christophine, an outsider herself as an ex-slave born in Martinique and living in Jamaica. “Who is there?” is followed by “You frightened?,” and these two challenges drive Antoinette to ultimately choose her Caribbean identity over her European one. When she sets her fatal blaze at Thornfield Hall, it’s because she imagines a red dress spilling across the floor like a flame, recalling an episode in which Christophine tells her to wear a red dress instead of a white one bought for her by Rochester. When asked “You frightened?” for the last time in a hallucination, it is by Tia, a Jamaican girl who was her friend before a mob descended on Antoinette’s childhood plantation home, burning it to the ground. In response to Tia’s call, Antoinette jumps toward her out on the mansion’s ramparts, and Sargasso ends. The fire that consumes her is directly linked to the one set by that group of newly freed ex-slaves. It is an act of resistance, not madness.

In response to Claire Vaye Watkins words on gendered biases in publishing, the author Marlon James claimed that as a writer of color he actually felt like he is often pressured to write not for white men, but for white women. He said in an interview, “I still remember the first publisher to see my second novel, which is a novel about women, about black women, slaves, and she basically asked me if I would turn it into a Jane Austen novel… because there’s a market.” James was referring frankly to an uncomfortable truth about the literary world and about the novel as an inherited cultural artifact: that it is foundationally born out of interlocking systems of oppression, which we must work very, very hard not to reproduce. Jane Eyre and Jane Austen should be lauded for their contributions toward progress, but not championed beyond their true limitations. I say this not out of a desire to unfairly criticize these works for being less radical than one that came a century later—but a more palatable, less fringe-based feminism increasingly pushed into the mainstream has done the same with politicizing these texts. This has created the dangerous sentiment that we are somehow already finished with emancipation if we can measure positively the success of white women. It is a more accurate measure of progress to consider that we’re marking 200 years of success of the same novel by the same white woman.

James was referring frankly to an uncomfortable truth about the literary world and about the novel as an inherited cultural artifact: that it is foundationally born out of interlocking systems of oppression, which we must work very, very hard not to reproduce.

So in a time of supposed intersectionality, what does burning the whole system down really look like? I don’t have the answer, but I’ve started looking for one in Rhys. She paid attention to Bertha instead of to Jane; Rhys herself was a Bertha more than a Brontë, and, accordingly, a celebration of Jane Eyre should require a revisiting of Wide Sargasso Sea. Rhys was anything but diminutive—she doesn’t fit into the Jane/Jane model of a woman author who quietly subverted norms, petticoat intact. By invoking Afro-Caribbean ways of being and knowing to combat the hegemony of Jane Eyre—the practice of obeah, the figure of the zombi—Rhys posits the radical idea that emancipation might be better accomplished if led by those who can most clearly see their bondage, who are furthest from the source. One aspect of “burning it down” is speaking honestly about significance—who gets to claim it, and why, and whether they should anymore. A friend told me at lunch last week rather sheepishly that he felt he couldn’t stand any more Jane Austen, in the wake of a recent Jane Austen retelling going on-sale and the news of another one recently sold to a publisher. I think I agree.

Rhys’s work brought me to Caribbean women writers of color who also staged literary occupations of the West, like Prosperos Daughter (Elizabeth Nunez) or I, Tituba, Black Witch of Salem by Maryse Condé, featuring a cameo by Hester Prynne. This in turn can ironically lend some integrity back to Jane Eyre and to Charlotte Brontë—much has been written of Bertha as Brontë’s “other,” someone who she feared and reviled but who also fascinated her. In the novel, Rochester refers to Jane as a “change” from the “fierce ragout” of Bertha—how one, how Charlotte Brontë, could ever truly prefer to be a “little girl” over a “fierce ragout” I don’t know. I would hope to be a Bertha in a world of Janes, which might account for why, as the critic Caroline Rody has written, “the canonical text seems always to have contained the germ of this rebellion.” Brontë herself should be excavated from under the weight of 200 years of Jane Eyre, which some don’t even regard as her best book. That fantastic Matthew Arnold denouncement of Brontë’s rage is actually about her last novel, Villette, which was less successful. I might read that instead.

On the Literature of Cyborgs, Robots, and Other Automata

If Jane Eyre Came Out Today Would It Be Marketed As Genre? 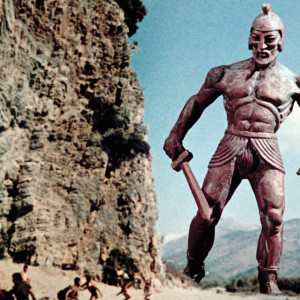 On the Literature of Cyborgs, Robots, and Other Automata

Automata prefigured not just artificial intelligence, but the public’s terrors of it. Pop culture cyborgs, from Metropolis...
© LitHub
Back to top