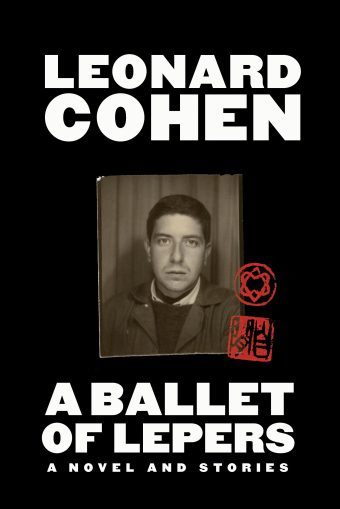 The following is from Leonard Cohen's A Ballet of Lepers. Cohen was born in 1934. Soon after graduating from McGill University, he published his first collection of poems, Let Us Compare Mythologies, in 1956. He would go on to publish a dozen more volumes of poetry, including Book of Longing; two novels, The Favourite Game and Beautiful Losers; and, most recently, a posthumous collection of poems, drawings, lyrics, and drawings in The Flame. Cohen died in Los Angeles in November 2016.

I suppose I will never lead the ordered life my father led. And I’ll never live in the kind of house he lived in, with its rituals, its dignity, the smell of polish. Whenever I blow into Montreal, I manage to take a look at the old house. It’s that large Tudor-style at the bottom of Belmont Avenue, right beside the park. It looks the same. Maybe the elms on the front lawn are taller, but they were always monumental to me. I couldn’t hold on to the place or the factory and properties that went with it. A man has to discover his own responsibilities. They aren’t necessarily the ones he inherits. But that’s another story.

My father died when I was nine. My sister was thirteen. He had been in the hospital since the end of the summer. Now, it was the middle of January, a deep snow over the city. Nursie told us the news. She was seated solemnly at the breakfast table, her hands folded on the white cloth before her, like a schoolgirl. She greeted us good morning, but she did not speak again during the meal. She looked at us, like she did when we practised our scales, severe, but hopeful as we for a clean run. When we were finished, the door to the kitchen was mysteriously closed. The maid did not come in to remove the dishes.

“You won’t be going to school this morning,” she said, as we were getting up from the table. “Your poor father went very late last night. Mother is still sleeping, so we must be quiet.”

“The funeral will be tomorrow.”

We both rushed to her.

“I wanted you to eat your breakfast first.”

Then the day dawned on me.

“But it can’t be tomorrow, Nursie. It’s my sister’s birthday.” So, my sister has a quiet birthday every year. I try to remember to send a card. None of us wished her happy birthday the next morning. I looked in the large dictionary for another word for happy, but I couldn’t find anything you could say on the day of a funeral. At about nine o’clock, six men entered the house and set the coffin down in the big living room. It was surprisingly huge, made of dark-grained wood, brass-handled. It made the living room more formal than we had ever known it. The men placed it on a stand and began to open the cabinet-like cover.

“Close it!” my sister cried. “Make them close it!”

In some houses, the coffin is left open hours before the ceremony. But we were afraid to see our father dead in his own living room, beside the chesterfield on which he always slept after Sunday dinner. My mother came in and told them to close it. I had turned my head and was listening for the click of the cover, but I heard nothing. These men, who make their living among the bereaved, moved noiselessly and they were gone when I opened my eyes. All the morning, my sister and I avoided that room. The mirrors of the house were soaped. It was as if the glass had suddenly become victim to a strange indoor frost. My mother stayed alone in her room. Around noon, people began to congregate in the street and in the hall of our house. An hour later, the three of us came down the stairs. The hazy winter sun glimmered on my mother’s black stockings and gave, to the mourners in the doorway, a golden outline. We stood closest to the coffin, the family behind us. Friends and workers from the factory thronged the hall, the path, and the street. My uncles stood behind me in their black suits, tall and serious, occasionally touching my shoulder with manicured hands. I wore a black swatch on my sleeve and throughout the ceremony I felt for it frequently to assure myself it was still there.

“We’ve got to be like soldiers,” whispered one of my uncles.

My sister and I were defeated. The coffin was opened. I glanced at my sister. We forced ourselves to look at him. He was swaddled in silk, wrapped in a silvered prayer shawl. His moustache was fierce and black against his white face. He appeared annoyed as if he were about to awaken, climb out of the ornate box, and resume his sleep on the more comfortable chesterfield. Throughout the prayers, we watched him. He was buried in the white cemetery close to the gates which one of our cousins donated. The gravediggers looked irreverently informal in their working clothes. A mat of artificial grass had been spread over the heaps of exhumed frozen mud. The coffin went down in a system of pullies. After the burial, there was a lighthearted atmosphere back at the house. Bagels and hard-boiled eggs were served. My uncles joked with friends of the family. My father was hardly mentioned. Though I resented the joviality, I took part in it. I looked under my great-uncle’s beard and asked him why he didn’t wear a tie. Then one of my uncles took me aside. He told me that now I was the man of the house, that the women were my responsibility. This made me proud. I felt like the consecrated young prince of some folk-beloved dynasty. I was the oldest son of the oldest son. It’s strange, considering how far I’ve gone from them, that I still feel like that prince sometimes. The family left last. My aunts helped the maid collect the teacups and the small plates flecked with crumbs and caraway seeds. My mother had used the dishes with the gold pattern, thin ones you could see candlelight through. Nursie supervised the kitchen clean-up, telling my mother to get some rest. On top of the icebox, there was a vase of yellow chrysanthemums. From one of the stalks hung a black-edged card. It was from a Christian friend who did not know that flowers are not displayed in a Jewish house of mourning. Nursie was going to take them to her father’s house. The flowers made me remember my sister’s birthday. There hadn’t been a mention of it all day. Nothing happened. I didn’t devise some sweet gesture to break the silence. I didn’t take a single chrysanthemum to give her or lay on her pillow. I had to wait years before I could get that maudlin. Nothing happened but this conversation. Late that night, I met my sister in the upstairs hall. Neither of us was sleeping very well. She said to come into her room.

“Your feet are cold,” she said, when I had gotten into the bed. “So are yours.”

We lay for moments in silence. There was a bright winter night beyond the window. The yards of lace curtain held some of the light.

Finally, she said, “Did you look at him?”

“And his moustache so black. Like it was done with an eye-brow pencil.”

“We’ll never see him again. We should have let them keep it open this morning. We could have seen him for a whole extra morning.”

“Ceremonies” is excerpted from A Ballet of Lepers © 2022 by Old Ideas LLC. Reprinted with the permission of the publisher, Grove Press, an imprint of Grove Atlantic, Inc. All rights reserved. 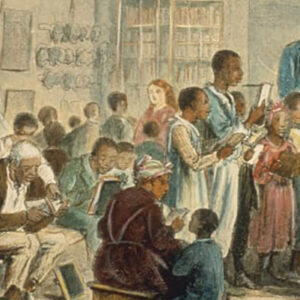 What Progressives Can Learn From the Failure of the American State to Address the Legacy of Slavery After the Civil War Hosted by Andrew Keen, Keen On features conversations with some of the world’s leading thinkers and writers about the economic,...
© LitHub
Back to top