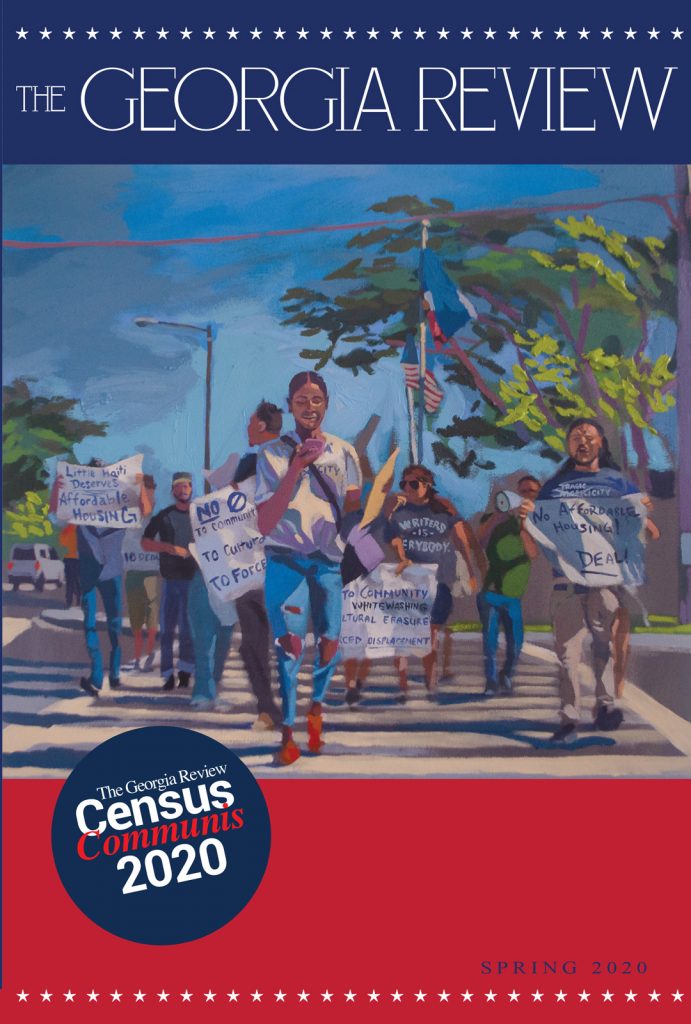 The following short story, written by Amanda Ajamfar, is excerpted from The Georgia Review's Spring 2020 Issue. Ajamfar is a short-story writer currently living in New York City. She has been generously supported by awards and fellowships from the Vermont Studio Center, the Asian American Writers’ Workshop, and the Millay Colony for the Arts.

In order to get the insurance company to pay for the visit, the therapist needed to make a diagnosis within the first session.

“Don’t pay too much attention to it, though, these kinds of diagnoses aren’t really that helpful or accurate; it’s just paperwork.”

But then the woman proceeded, in trying to figure out which boxes could be checked, to fixate on things Atoosa did not care for. She asked too many questions about Atoosa’s eating habits, ignored the reasons Atoosa gave for not eating. Then she picked at Atoosa’s choice of words in describing her mother, wanting to hear more about that than about the difficulty Atoosa was having trying to negotiate her need to have a phone for her job and social life with the unethical production of the object.

“Ecological anxiety, yes, I get it. That makes sense. We should all worry more about that, Lord knows. But what else? What is actually causing the anxiety?”

Atoosa scheduled another appointment but, while pretending to put it into her calendar, set a reminder to cancel it the next day. She had hoped therapy could help with the recent resurgence of constant, uncontrollable fear. But, clearly, the therapist only wanted to treat the surface-most symptoms. That wouldn’t work this time, because the dangers were not just in her mind and they couldn’t be cured. Atoosa could tell the difference and wished other people could too.

Atoosa had always been a worrier. As a child she had been obsessed with  the idea that while she was at school her home might catch fire, or someone might break into it, or, most tragically, and therefore most likely, the family cat might choke on a toy while everyone was out of the house. She would spend every day uncontrollably imagining coming home and smelling feces as soon as she opened the door because the animal’s bowels would have released after he died—struggling, alone. Worse, she had worried that when a tragedy did occur it would be her fault, because she thought of it before it happened and hadn’t moved to prevent it.

But thanks to an adolescence spent in therapy, Atoosa learned to believe most of the things she feared were unreasonable—all within the realm of possibility, yes, but not likely. She understood that thoughts could not cause catastrophes, and she knew how to keep herself from reacting noticeably to her anxieties. For many years she functioned “normally”—nervous, but not disruptively so.

Recently she started to think her dog, a pitbull-shepherd mix named Sampson, might chew off a scrap of the blanket in his crate and choke on it while she was out of the apartment. So she did, then, remove the hazard. Doing so, she realized it likely made him less comfortable, and maybe made his life a little worse. But he could not argue with her, and no one else would ever know, so she permitted it of herself. It seemed harmless. Such a small thing to ease her worries so effectively.

Atoosa blamed part of her resurrected fear on Our Dangerous Era: the tv show she had been working on for three months, a stylish miniseries with famous actors reciting fact-filled monologues to a premium-channel-paying audience, mostly focused on the environment—rising oceans, collapsing ecosystems, the people and animals that would not make it through the next century. Her bosses wanted numbers and the names of think tanks and labs, and then high-quality footage of people panicking, landscapes that looked like sci-fi dystopias—her job was to find this evidence, source it, and begin the process of obtaining permissions for its use. It meant long hours of reading, watching hour after hour of amateur and professional videos, digging deep into proof of the worst of things.

A small voice inside, the distrustful, rational thing at the center, reminded her of the manipulative aspects of the production. The show, after all, was not made out of the goodness of anyone’s heart. The people in charge may have been genuinely concerned about the subject, but they were also concerned about their next project and paying rent. There was always a level of sensationalizing. Yet as she spent her days studying the environmental issues she had heard about her whole life, she knew there was no need to sensationalize. The dangers were real. The collapse was happening. The situation was exactly as bad as it sounded.

When she shut her laptop at the end of the day, Atoosa told herself—in tones picked up from magazines and brunch conversations with caring friends—that it was unhealthy to fixate. Work had to be left at work. She had to stop worrying herself. To do this, she decided on a rule: no thinking or speaking about what she had read and seen at work until she got to the office again the next morning.

As she spent her days studying the environmental issues she had heard about her whole life, she knew there was no need to sensationalize. The dangers were real. The collapse was happening.

But on the very first day she tried to implement that rule, she struggled with the rationality of it while walking to the subway station. Terrible things would not stop just because she looked away. Despite herself, she kept thinking this as she walked and only succeeded in forcing the thought to grow shorter—it’s not going to stop—and become more melodic: it’s not going to stop, it’s not going to stop, ’til you wise up. She couldn’t remember the rest of the lyrics, but she was pretty sure it was a love song and thus not actually applicable to ecological disaster.

At home that night she had trouble choosing something to eat, because everything in her fridge screamed waste: using anything up would mean throwing away packaging, buying more, repeating the cycle. Only Sampson got to have his dinner, and she reasoned that his food was allowable only because he was not culpable for any of the systems that brought him food— she was.

The next evening, at a happy hour with people from her office, Atoosa again failed to follow her rule.

“Look. I thought this was horrible.”

She held her phone out to Gilli, one of Our Dangerous Era’s assistant producers. On the screen was an article about the first places in the world that would be, for a part of the year, completely uninhabitable for humans due to heat. Right beneath the headline was a map of the Persian Gulf, the land northwest of the water highlighted bright red, bleeding over into Syria and Iraq, and turning orange as it brushed over Egypt. Gilli glanced at it, then nodded forcefully and took a long drink from her beer.

Gilli leaned over from her seat at the bar, wrapped one arm around Atoosa’s waist, and squinted at the map on the phone.

“It’s where your family is from?” she asked, tentatively.

“No, sort of, yes, but we’re from the center, near Isfahan. I mean the whole area marked.”

Gilli held the phone closer to her face, studying the image. The moment dragged, and Atoosa felt it was about to turn bad, that Gilli would be embarrassed for not having known. She liked Gilli, liked her curls and her eyes and how she seemed truly affected by the work they were involved in, so she tried to pitch her voice just right, to announce the answer without any condescension.

“It’s the fertile crescent, the cradle of civilization.”

“It’s the region where some of the oldest major civilizations were started, the first cities—” Gilli looked back at the phone, her face falling as she began to understand. “Isn’t it horrible? The place we started from is the first to go.”

Gilli turned to Atoosa with tears in her eyes and said, “That’s too big a coincidence, isn’t it? It must mean something.”

Atoosa nodded but did not actually think so. To her everything was always the worst, and this would be at its worst if it did not mean anything at all.

At the end of the night Gilli tried to pull Atoosa into her cab, but Atoosa said she had to get home to walk her dog. As she sat alone on the subway, she hoped that in some small, doggish way Sampson could see how they had to make sacrifices for each other’s comfort.

One morning before work, Atoosa’s father called to ask if she could use some of her vacation time to come visit the family in Iran; a lot of cousins were getting married or having babies, a few great-aunts and uncles were getting to the point where a last visit really needed to happen. No, things weren’t good with the U.S.—but were they ever? A quick trip. It would be fine.

Atoosa could not imagine herself getting on a plane—it caused her stomach to twist painfully. Her father felt her hesitation but misread it.

“You’re still afraid of flying,” he said. “You’ve got to get over it. Planes are very safe. Look up the statistics. Let me tell you—”

Atoosa cut the oft-repeated speech off, promised to look at the production calendar and see what was possible, and hung up.

Yes, she was terrified of trapping herself in a several-ton box filled with hot, flammable fuel, gliding thousands of feet in the air—what thinking animal wouldn’t be? But there was also the equation she had seen, the one that could calculate how many square meters of Arctic ice would melt due to the flights it would take to get there and back.

Throughout work that day she considered it all deeply: perhaps she should prioritize seeing her country before politics made it logistically unreachable or climate change made it physically unbearable. There were dozens of people over there whom she loved and dearly missed, and who did not have the option to travel. She would never see them again if she did not choose to go there herself.

But those were all selfish reasons, weren’t they? People like her, Americans with all the choices and the biggest carbon footprints, needed to be making more sacrifices. The flights, of course, would happen anyway, she reasoned— but isn’t that what everyone reasoned?

From the short story “Catastrophizing” by Amanda Ajamfar, excerpted from The Georgia Review’s Spring 2020 issue. All rights reserved.

Behind the Mic: On The Safety Net by Andrea Camilleri and Stephen Sartarelli [Trans.], Read by Grover Gardner 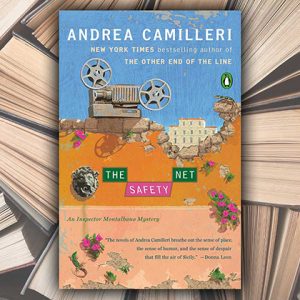 Behind the Mic: On The Safety Net by Andrea Camilleri and Stephen Sartarelli [Trans.], Read by Grover Gardner Every Monday through Friday, AudioFile’s editors recommend the best in audiobook listening. We keep our daily episodes...
© LitHub
Back to top