Can You See the Wind? 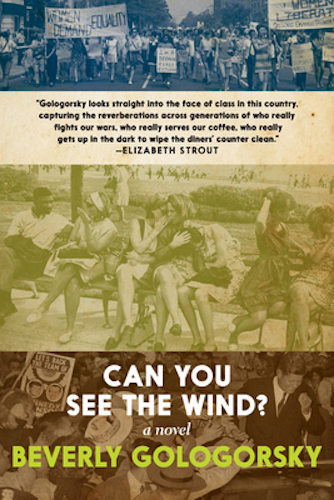 The following is excerpted from Beverly Gologorsky's new novel, Can You See the Wind? Gologorsky's first novel, The Things We Do to Make It Home, was acclaimed for its depiction of working-class lives—the mothers, sisters, wives and widows who carried on in the damaged wake of the Vietnam War. It was named a New York Times Notable Book, and a Los Angeles Times Best Fiction book. She is also the author of two other novels. She currently lives in New York.

On the El train platform beneath a bruised sky, Josie takes in the tarred rooftops of the stunted gray buildings that make up the Bronx. This is where she was born. But being born somewhere doesn’t make it forever. She reads books, though her mother regards them as dust gatherers. It used to annoy her, and maybe it still does. But protesting her mother’s attitude would do no good. Perhaps it’s because her mother wasn’t born here and simply can’t understand what’s important to Josie. What’s difficult, though, is growing up within a family where everyone sees her future through the tiny lens of his or her own life. It makes her want to shout no, but she’s learned to abide.

She exits the subway and heads to the Peacock Cafe, her Greenwich Village weekend sanctuary where artists, poets, and political people congregate. Captured by their conversations, which are rarely whispered, she learns a great deal, especially about the Vietnam War, which is on everyone’s lips.

Maisie and Nina, two NYU students, invited her to join their table several weeks ago. They, too, are actively part of the growing antipathy to the war. Their certainty about their beliefs impressed her at once. And their assumption that she shared their views pleased her.

She didn’t mention that her brother Richie had signed up for the army. It’s still possible that he won’t pass the physical. He has allergies, needs glasses. He used to memorize the school eye chart, because who could afford glasses? He says the army will teach him a trade, even fix his teeth, and besides, he’d be drafted anyway. She didn’t want Richie to enlist, pleaded with him, but to no avail. They’ll equip him to kill for no good reason. Some men have it in them. Not her brother. The war will devour him.

Finding a table for three, her eyes rest on the wraparound mural of the Amalfi Coast, near where her parents were born. The mural is old and flaking in spots, but the green-golden mountains atop the blue sea are beautiful to behold.

Maisie swings in on a gust of cold air. “Forget coffee. We’re going to a meeting. Nina’s already there.”

She follows her friend through a maze of university hallways to a classroom with a closed door. Seated inside around a table are Nina and two men. Maisie introduces Josie to Lowell and Ben. With only a nod to her, their talk continues. With their excited voices and gesturing hands, their conversation could be mistaken for a run-through of a play without costumes.

“Did you read McNamara’s spiel in the Times yesterday?”

“They lie without batting an eye.”

“Do they think we’re idiots?”

“They’re murdering in our name.”

“Not my country right or wrong.”

“Hey, the Communists are landing at Malibu.”

“They can’t fight this fucking war without us.”

“We have the power to make a difference.”

“We’ll escalate every time they do.”

“They can’t get away with sending more troops. Wake up, campus! Wake up, people! We’ll get the message out.”

“Whatever actions we take will feed into the DC march. Who in their right mind wants this obscene war? I’d rather be jailed than kill innocents.”

“The Midtown building that houses Honeywell offices. The bastards make cluster bombs. But we should wait until Monday when people return to work,” Ben says.

Their optimism is infectious, a kind of blind faith. Their faces unchecked by negatives, success is a given. The energy, certainty, the whole scene, charges Josie’s brain; only their sense of entitlement feels alien. It’s as if they can have what they want by declaring it so.

“Are you with us, Josie?” Ben whispers, his bright eyes playful.

“We’ll meet back in this room at four, and bring slogans. Okay, let’s split.” Lowell calls it as if it’s a football move.

She, Nina, and Maisie head out together. The freedom of their long gauzy skirts only adds to her desire. These are the women she wants to live with, though she hasn’t told them so. But wanting and getting are miles apart.

“How about ‘No more war’?” Nina suggests.

“Yeah,” Maisie agrees. “One strong one. It’s what Madison Avenue thrives on.”

“My job search begins this minute,” Josie hears herself say.

“No, full-time. I’m moving out of my parents’ place. I’ll need somewhere to crash, a couch or mat, a key in my pocket. I’ll chip in for the rent.” Her words as eager as her wish.

“We have a pullout,” Maisie says more to herself. “How long would you stay?”

“Till I find something I can afford on my own,” she promises herself.

“Okay with me,” Nina says. “It’s eighty a month. Could you swing twenty?”

“Absolutely. Can I move in this weekend?”

“There’s no room for more furniture.”

People dash past Celia with enough purpose for one to assume they’re on the way to significant destinations. Or it may simply be to escape the cold, raw wind. She, too, rushes, but it has nothing to do with weather. She’s late for work.

When the alarm rang this morning, no one budged, including her. Then they were all scrambling at once to get ready.

As usual Quincy was first in the bathroom, while Miles waited slumped in a chair, his eyes open but still asleep. If she’d asked what time he went to bed, he would have been upset. He’s seventeen, easily upset. Sam was the only one not waiting for the bathroom. Her husband had named the first two boys, but she had fought against the youngest becoming some musician’s afterthought.

Someday she’ll toss out the alarm clock and lie in bed in a gorgeous haze of unscheduled pleasure. On that day money will drop from heaven. What’s money really worth, Celia? That’s Paul’s singsong cadence in her head, instructing her to take it easy, cool the sweat, lighten up, go slow. But her babies, who are no longer babies, need everything. By now Paul is in Ontario. One more gig in Canada, another in Albany, then home for a while. His kind of music is on the wane, though he’s still on the road more than she’d like. He’s also getting high more often than she’d like. No worse than a truck driver taking NoDoz, he assures her. Her husband lives on the edge by choice, a man who’s been backslapped by mobsters, fooled by tricksters, slipped the occasional hundred-dollar tip by the slumming mink crowd. He offers his experiences to her lovingly, in detail. And she’s a sap, has been, will be, and so what? 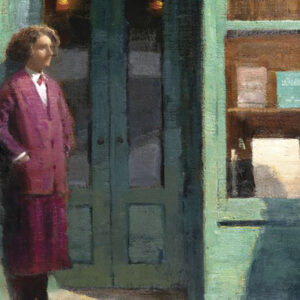