But What Will Your Daughters Think?

“I wonder what your daughters will think?” asks Annette, the wife of a fiction writer. We are in the auditorium at a book festival, and I have just read a short story based on an actual weird and fraught relationship I had with a high school teacher when I was a teenager. Annette waits; she really wants to know.

“I guess we’ll find out,” I say and laugh. My twin daughters are seven years old.

The story is called “What Happens Next?” It is autobiographical and it is about sex. Not intercourse per se, but the mysterious world of adolescent female desire. The fictional me in “What Happens Next?” is full of shame. She is a girl who is interested in sex, but not in the way she thinks she is supposed to be. She is interested in the high school teacher, but she is mostly interested in her own interest, in how much it excites her to have a secret. She is not as much sexually excited by the teacher as she is repulsed by him. The combination itself motivates her to keep coming back. It is the only short story I have ever published, even though I have written many. Writing, of course, is a different animal from publishing; many years passed between writing “What Happens Next?” and seeing it in print. During those in between years, I became a mother.

I knew I would have to write “What Happens Next?” about ten years before I sat down to do it. I had read “Ceremonies,” an essay in a collection of the same name by the late poet Essex Hemphill in which he describes seeking out the sexual attention of an older man in the neighborhood who, all the boys knew, would give money in exchange for sex. Hemphill didn’t want the older man’s money. He wanted experience. He wanted to know.

What moved me then about “Ceremonies” moves me now: Hemphill’s willingness to say the things that are hard to admit, and maybe give some relief to others who need it. “What Happens Next?” was my attempt to do the same. In general, I write because I believe there is some other person out there who will read my words and say, with relief, “Me, too.” I have never once imagined that other person as one of my daughters.

I sought out the weird and fraught relationship that I write about in “What Happens Next?” I wrote the story because I wanted to read a story about a girl who wasn’t necessarily innocent but definitely curious. I wrote it because I knew there was another girl out there, like me, who sometimes needed to learn her lessons the hard way. I wanted that girl to know she wasn’t alone.

I hope my daughters won’t get themselves into the same situation I got into when I was in high school. But “What Happens Next?” is not a cautionary tale. The girl in the story learned something and emerged with a story to tell. I think she’s pretty fortunate.

Maybe fathers are asked what their children will think about their work just as often as the question is posed to mothers. I don’t know. But I do know that when I am greeted with this question, it always feels like a variation on the age-old fears about women and work, that we will forget to be ashamed of our passions and ambitions, that we will forget our place and love ourselves as we are.

But there is something very specific, of course, about the question that Annette asked me that day. Should I have considered the future embarrassment of my daughters before I published a story about my teenage sexual curiosity? Are mothers allowed to write about desire?

I decide to ask my daughters, who are now 13. They are intimately aware of the scope of my creative interests, in part because I sometimes write, as I am doing today, in the center of the house where everyone can hear me whine about how hard the writing is going. I write about my daughters. The most interesting essays in my new book involve them in some way, even if they do not appear in them directly.

Some of the essays in the book I started writing before they were born. I have become a better writer as I have grown as a mother, and vice versa. At this point, the two identities are inseparable, writer and mother, even as they, just like my twin girls, battle and contradict each other constantly. I am a writer in the same way that I am a mother: I just am. A long time ago, both were wild aspirations. Now they are just daily occupations. Both jobs require regular self-evaluation, an ability to laugh at oneself, and a willingness to fail.

Being a writer and a mother has taught me a lot about the invisible line between past and present, the fragile but crucial distinction between self and other, my stories and theirs. I take care. We strike deals. Not long ago, I asked one daughter if I could use something she said in an essay I was writing. “Okay, but I’m going to need some Takis and Fiji Water for that one,” she said.

“Should mothers not write about their sexual feelings?” I ask the same daughter, let’s call her number one.

“Who said that?” she wrinkles her nose.

Her twin appears from the kitchen, spatula in hand. “What are you writing about?”

“It’s an essay about a story I wrote, about an inappropriate relationship I had with my high school teacher,” I say.

I tell them what Annette said.

“Why would she care?” asks daughter number one. “How would you know?”

“Listen.” The daughter with the spatula points it at me. “If someone wants to know what I think about your writing, they should ask me.”

Emily Bernard writes, teaches, and mothers in South Burlington, Vermont where she is the Julian Lindsay Green and Gold Professor of English at the University of Vermont in Burlington. Her collection of essays, Black is the Body: Stories from My Grandmother’s Time, My Mother’s Time, and Mine, was released on January 29, 2019.

How Learning to Draw Can Help a Writer to See 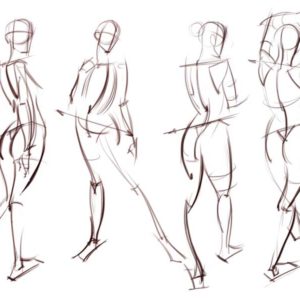 How Learning to Draw Can Help a Writer to See

From the time I was capable of holding a crayon, I loved to draw. I covered reams of paper with illustrations of the stories...
© LitHub
Back to top