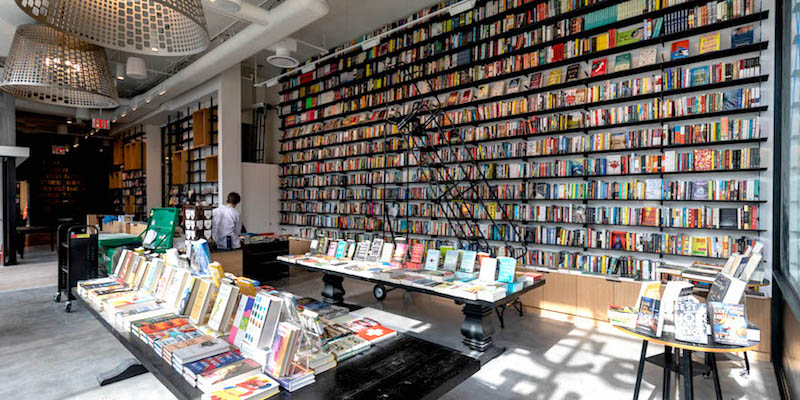 Talking to Benjamin Rybeck, Bookseller at the Center for Fiction

The first thing you notice as you walk into Brooklyn’s brand new Center for Fiction, which opened in February, is the bookstore. 1,800 square feet of floor-to-ceiling windows, all stacked to the brim with works of fiction, along with a café for wine, coffee, tea, and a quick bite while surrounded by books.

Benjamin Rybeck is a bookseller from Houston who moved to Brooklyn be a part of the new Center. “I came into bookselling a little bit by surprise, which I feel like a lot of people do,” he says. “It has a way of just kind of sucking you in.” Originally from Maine, Rybeck lived received an MFA in Creative Writing and taught Creative Writing in Tucson, Arizona before settling in Houston in 2014. “I happened to wonder into Brazos Bookstore there one day, and they were looking for some help.”

Since he didn’t know anyone in Houston and was looking for a community, Rybeck found one at Brazos. “I sort of just fell into the store,” he says. He started working part-time, helping with events as the Events Coordinator and Marketing Director. “Before I did that, I had no idea there was an industry as large as bookselling,” he says. “Bookstores were always just little shops on the corner to me, and I had no idea of the scope of them and the power that they have.”

When the general manager moved on a few years later, Rybeck took over as manager. “It’s a real crash course in how bookstores work when you’re just kind of thrown in and you’re learning on your feet a little bit, but I can’t imagine any other way to do it,” he says.

My boss there, Jeremy Ellis, was a great mentor to me, and when he left the store, I was honored to follow his lead and take the general manager position. Still, as much as someone can show you about bookselling, you don’t really know what you’re doing until you’re doing it. It’s like that with most things, probably. The nature of small business is that they often set their own path—there’s no one way to do something. So I just found myself diving into the business and learning so much—often on the fly—about inventory, marketing, events, buying, financials, HR, you name it.

While at Brazos, Rybeck started hearing rumors of the new Center for Fiction being built. “The prospect of it excited me, because I’ve always been a fiction reader myself,” he says. In Houston, Rybeck helped Brazos maintain a major focus on independent presses, translated literature, and debut authors. “I’ve personally always had a real affection for debut writers, emerging writers, young writers—because I think there’s a lot of exciting work being done there,” he says. “The Center’s commitment to supporting the careers of writers, and finding young writers and promoting them, and also shining a spotlight on books you might necessarily find other places in presses you might not necessarily find other places, it just felt very exciting to me as a place to be.”

“It might seem like an obvious thing to say, but you’re in the heart of publishing here.”

“I feel lucky to have landed here,” he adds.

Rybeck didn’t get a lot of downtime to explore all Brooklyn has to offer before the work began. “I hit the ground here in New York January 5th and had a day to unpack, and then January 7th was my first day here,” he says.

It’s nice to be at the Center now, with a great team in place, and a wonderful executive director in Noreen, who really has a vision for the space and wants to create something grand and beautiful. And of course the Center has a long, rich history—but is still eager to evolve. It’s an exciting time, and it allows for me to focus squarely on the retail and merchandising sides of the bookstore—my favorite parts!

With the move came some significant changes. “It might seem like an obvious thing to say, but you’re in the heart of publishing here,” he says. “If you’re selling books in Minneapolis, then your local publishers that you might support are Graywolf and Coffee House. If you’re selling books in New York, your local publishers are Penguin Random House.”

There are more means of access and more ways to stay connected to the bookselling community as well. “Houston had some wonderful bookstores, but there weren’t that many. New York of course, there’s wonderful bookstores everywhere.” Another big difference is the access and visibility that bookstores in a walking city enjoy. “We’ve been open for five days now in our soft opening phase, and we’ve had people in all the time, and they are finding out about us just because they’re walking by.”

In Houston, you have to create a destination store and do a lot to get people to come to you. And here people are just streaming by. Rybeck doesn’t think that having only fiction is limiting.

“The amount of stories that you see across novels—you can go anywhere with fiction. Fiction is often just as rooted in the real as nonfiction.” He indicates the table behind him. “As a fiction reader, just buying stuff on that table, I can travel from Germany in the 1940s to contemporary Nigeria to New York apartments in the 1960s. You really are a time traveler when you’re a fiction reader. I don’t think a focus on fiction is limiting at all. I’m always shocked to see the expansiveness of the genre and what is offered when you look at all the fiction that is coming out at one point in time.”

Writing’s not easy. That’s why we need places like the Center for Fiction.

In the building, Rybeck is a particular fan of the Writer’s Studio. “I can’t wait to see that room filled with writers working on the books that then in a few years will be out and will be down here in the store. There’s such a rich history of the center supporting young writers and providing them with a space to do their work.”

As far as the bookstore, Rybeck is trying to go with the same feeling he gets from any bookstore. “Any bookstore that I go into, I want to see the stacks, I want to see what’s up front, because that’s where the personality is really going to be. And one of the things that I love about this bookstore is, it is packed with books and it still feels spacious. You can just sort of explore this floorplan.”

Rybeck says every day he goes into the store he likes to wander between two large tables that sit out in the middle of the store. One boasts new paperbacks and the other new hardcovers. “It’s just beautiful to come in and see a world of fiction in front you—fiction at a glance, fiction at a snapshot of the present moment of fiction. I think one of my favorite things to do when I come in here is just walk through those tables, and look at the books on either side of me, and see that scope of what literature is at the moment.”

At Brazos, Rybeck says he always thought about what brings people to independent bookstores. “It’s not like walking into an Apple store, or buying a widget for your phone or something like that. Sometimes customers come in and they know what they’re looking for, because they read about the new Valeria Luiselli book or the new Thomas Mallon book or whatever, and they’re just excited to be part of that conservation. But I’ve always found that just as often, customers are coming into a bookstore because they don’t know what they’re looking for. And they don’t know what they’re going to find. And that is an exciting way to engage with literature.” At the CFF’s bookstore, Rybeck says any fiction lover can look forward to a selection of fiction that will feel like a dream for anyone who reads fiction or loves reading fiction.

As a writer, Rybeck says his experience has given him a deep respect for the process of book making, from concept to final product. “You look around at all of these books that are in this store right now, or in any store, and you see people’s time and people’s energy and people’s emotional investment. And all of these books were the most important thing in the world to the writers who were working on them.”

Because of this, Rybeck sees bookselling as a humbling profession. “You’re honoring that work. You are putting it up front for people to look at and people to see and people to buy, and you’re like the last step in the writer’s process to finally get that work out there.”

“I have a deep respect for that, in part because I know how hard it is. Writing’s not easy. That’s why we need places like the Center for Fiction, that have resources and help writers from the earliest possible stages. It really is tracking the entire process of what it means to be a writer, and creating resources every step of the way.”

'Correspondence'
A Poem by Jericho Brown 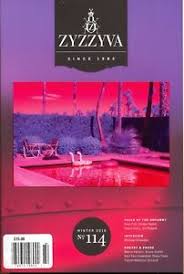 For we did love them, which is to say we watched them. Knew their habits and spoke gently and quietly about them. Loved them...
© LitHub
Back to top