Floyd Mayweather Jr.—the undefeated, eleven-time boxing champion of the world—lounges on a table. It is the fourth and final day of the international press tour for his coming bout against Conor McGregor, the brash UFC Lightweight Champion. McGregor, decked in a purple suit, leans back and smiles at Mayweather, who stares up through his sunglasses at the lights above. He lets the London crowd chant “sit down, shut up” while the gold chains hanging from his neck glisten. Mayweather steps down from the table, faces McGregor, and says “I’m just getting started.” Later, they stand toe-to-toe in the center of the ring, and the sportscaster says to the audience “Yes, it is a circus. Yes, it is a show. Yes, it is hype, But hey, it’s fun, right?”

Thirty years ago, in her collection On Boxing, Joyce Carol Oates wrote that boxing is “our most dramatically ‘masculine’ sport, and our most dramatically ‘self-destructive’ sport.” Returning to On Boxing decades later feels like finding a book that is part prophecy, part elegy. When Oates observed that “boxing has always been in crisis, a sport of crisis,” she was right. Boxing always seems on the precipice of cultural extinction, but all that is needed is one great fight. Or rather, one great spectacle.

Boxing has been fodder for novels since Jack London’s The Game (1905) told the story of Joe Fleming, a 20-year-old lightweight. Joe flails during a bout. He is knocked down again and again, and “fanned the air with his arms, showering savage blows upon emptiness. There was nothing human left in him. He was the beast incarnate, roaring and raging and being destroyed.” His foot slips on the wet canvas, and his opponent delivers a stunning blow to the chin. Joe’s “muscles relax while he was yet in the air,” and he dies in the ring.

Writers from Ernest Hemingway to Thom Jones have depicted other brawlers, but perhaps the finest boxing fiction is the taut and moving Fat City, about the blue-collar world of boxing in Stockton, California. Leonard Gardner’s lone novel is a masterfully unsentimental look into the hopes and failures of small-time fighters, and even offers a glimpse into the world of boxing trainers through the character of Ruben Luna. Gardner’s description bounds between the ring, the gym, and the city, finding their shared atmosphere: “Around the area cruised squad cars and patrol wagons with their pairs of peering faces. The fallen, the reeling and violent were conveyed away. Ambulances came driven by policemen. Fire trucks arrived and sodden, smoking mattresses were dragged out to the pavement. Evangelists came with small brass bands. Sometimes a corpse was taken down from a hotel.”

Oates has been one of Fat City’s most ardent admirers, calling the book “flawlessly rendered, unforgettable,” and praising Gardner’s “remarkable gift for realizing, as if from the inside, the psychology of the man born to fight, the man who knows nothing but fighting, no matter the suicidal nature of his calling.” Oates’s father loved boxing and brought her to matches; he would even spar with his best friend. “Boxing was part of my childhood,” she has explained, “it was an important part of that working-class background. And for me it raised all kinds of questions about masculinity. What does it mean to be a man? The questions are unanswerable but provocative. I was fascinated by boxing.”

Fascination can breed sentimentality, but Oates is always aware of herself in On Boxing. “No other subject is, for the writer, so intensely personal as boxing” she warns in her preface. “To write about boxing is to write about oneself—however elliptically, and unintentionally.” She wrote the collection at a high point in American boxing; while Ali had retired, there was Larry Holmes, Marvin Hagler, Sugar Ray Leonard, and the rise of Mike Tyson.

She quotes Flannery O’Connor’s remark that “If the Host is only a symbol, I’d say the hell with it” to capture her feeling that she does not view boxing as a convenient literary symbol. A lesser, more superficial literary writer might cherry-pick elements of the sport to dress a thesis. Oates recognizes the mess, and digs into it. She sees boxers as dancers, how they are defined by their bodies and identified by weight classes. “To enter the ring near-naked and to risk one’s life,” she writes, “is to make of one’s audience voyeurs of a kind: boxing is so intimate.”

In words that presage Mayweather-McGregor, “boxers will bring to the fight everything that is themselves, and everything will be exposed—including secrets about themselves they cannot fully realize.” The circus of their protracted press conferences was inevitable, if we accept her view that “the boxer meets an opponent who is a dream-distortion of himself in the sense that his weaknesses, his capacity to fail and to be seriously hurt, his intellectual miscalculations—all can be interpreted as strengths belonging to the Other.”

She feels there is no “natural” boxing movement: “All is style.” The ring is elevated from the audience. The boxers are drenched in lights. With boxing, “as in the theater or the church,” she notes, “settings are erased by way, ideally, of transcendent action. Other than seconds-long sprints at track meets, boxing is one of the briefest sports, so seconds matter. For Oates, boxing is a story, a “dialogue of split-second reflexes,” and when a boxer is knocked out, “it means rather more poetically that he has been knocked out of Time.”

Oates weaves lyric and incantational lines about boxers and boxing between observations about boxers somewhat lost to time, like Tommy Loughran. She nods to other greats in her genre, like Norman Mailer’s observation that Ali “worked apparently on the premise that there was something obscene about being hit.” She ponders the paradoxes of pain.

Her writing on the rise and legend of Mike Tyson, written during the boxer’s prime, is an invaluable document. Later, after Tyson had fallen, she would write with elegiac wisdom: “The boxer has journeyed to a netherworld of visceral, violent experience that most of us, observing from a distance, can have but the vaguest glimmer of comprehending; he has risked his life, he has injured others, as a gladiator in the service of entertaining crowds; when the auditing is done, often it is found that, after having made many millions of dollars for himself and others, the boxer is near-penniless, if not in debt to the IRS, and must declare bankruptcy. Ironic then, or perhaps inevitable, that the afterlife of the champion boxer so often replicates this tragic role in farcical form.”

Even now, Oates’s regularly cites boxing on her often-colorful Twitter account, once quipping “The only sport I’ve been interested in is boxing—but then, boxing isn’t a ‘sport.’” She’s also given Mayweather measured praise, saying he “is a very skilled boxer but not a ‘great’ boxer: he is careful, risks little unlike (truly great, heroic) Ali.” Yet Mayweather’s ability to win titles in five different weight classes would identify him, according to one phrasing of On Boxing, as “a great champion—an immortal” like Robinson, Leonard, Roberto Durán, and Alexis Arguello.

In 2016 she received the A.J. Liebling Award for Outstanding Boxing Writing from the Boxing Writers Association of America—a nod of respect from an often insular community. She’s earned it. Years later, On Boxing still reads with punch. The book is a nod to the complex question of how a writer can “enjoy so brutal a sport.” Her answer? She doesn’t quite enjoy it, but she is able to capture the significance of its spectacle. “Life is like boxing in many unsettling respects. But boxing is only like boxing.” 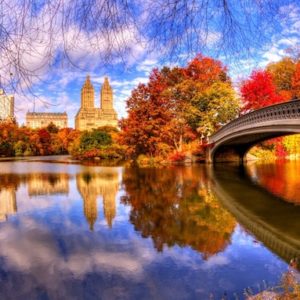 Everyone in the world should have the chance to fall in love in a New York City spring, at least once. Spring, in New York,...
© LitHub
Back to top