Born to Rewild: Jeff VanderMeer on What It Means to Restore Your Own Little Part of the World

The Author of Hummingbird Salamander Talks to Drew Broussard

“At best, we plotted sometimes to buy a mountain retreat deep in the forests. […] Woodsy, roll-up-your-sleeves self-sufficiency. Except, we’d have a good internet connection.”

Oh shit, I thought, when I read this about 20 pages into Jeff VanderMeer’s Hummingbird Salamander. Like many people during the early days of the pandemic, my wife and I went from dreaming to very seriously thinking about leaving the city for the woods. Then, like fewer (but still a whole lot of folks), we actually did it. Never mind that it had long been our intention; we ended up a part of that great exodus, the people who wanted the space and freedom of the country, plus good wi-fi and—oh yeah—throw in that superb farm-to-table restaurant too. We wanted to be further from the world of the city while keeping all the things we liked about it, for convenience’s sake.

Still, there’s a big difference between dreaming about a woodsy retreat and suddenly staring down spring on an unkempt acre of land after having lived in an apartment for ten years. So, I did the only thing that made sense to me: I reached out to Jeff.

“I’ve actually invested in a weed flamethrower,” he tells me with a laugh over Zoom in mid-March, “which I’m a little bit concerned about because it’s bigger than I thought it was going to be—but we have some invasive spiderwort and it disrupts the cell structure, if you lightly toast it from like six inches above, and that kills it off the same way as if you use an herbicide.” I take furious notes.

He’s talking to me from his home in Tallahassee, at a house the internet has come to know and love thanks to Jeff’s joyful counter-programming to Twitter doom-scrolling: birds, raccoons, a rabbit called The Traitor Jesse Bun, snakes, possums, and his Maine coon cat Neo all make regular appearances on the #VanderWild hashtag. He and his wife Ann bought the place in late 2018 and immediately set about rewilding the yard, a process he’s also documented on his website.

I actually hadn’t realized the house was in Tallahassee, coming to the conversation with only a New Englander’s sense of how cities can exist. “It’s just by geological chance,” he explains, “there’re all these little ravines scooped out. It’s actually fairly hilly—and so all these little ravines are so steep that they couldn’t develop at the bottom of them, and so they built houses at the top and at the bottoms are all wooded areas that have been wooded continuously for a long time. That’s why we have box turtles down here that are 40 years old. They’ve never had to cross a road, even though we’re right in town, more or less.”

These systems that we live within are so complex and the feedback loops are horrifying right now in terms of how things interplay with one another. But there might be some that are less so.

This melding of nature and civilization feels like an omnipresent consideration of the VanderOeuvre: the fungal Grey Caps under the city of Ambergris, the genetically modified monsters of the Borne stories, and particularly the strange wilderness (and just as strange bureaucracy) of Area X in the Southern Reach trilogy. Hell, the man drew on his childhood in the Fiji Islands to write a Predator tie-in novel. But when I mention this sense of his work having always carried a deep communion with the natural world, he’s quick to acknowledge that in some ways he’s still very much a newcomer.

“Jane [the protagonist of Hummingbird Salamander] is coming from a background where she never really thought about environmental activism, she’s like a beginner, so to speak, which is where I was three years ago. You know, I donated to causes, I thought about the environment, but I wasn’t immersed in the activism in such a way that it was immediate. But it’s only in the last three years—and oddly enough because of Annihilation being successful and about the environment—[that] all these places wanted me to talk about the environment; and that caused me to re-evaluate what I mean. I felt a commitment to really knowing more, in detail; the granularity of my knowledge being greater than it had been at the time.”

He goes on to explain that, in his old house, he’d been focused on the local wildlife but hadn’t thought much about the local plants—and a specific example shifted everything for him: the realization that the camphor tree, an invasive species to the area, can support one type of butterfly whereas an indigenous live oak could support as many as 500 different species. He sees the problem as one rooted in local Tallahassee politics as well, specifically in the way that the ever-more center-right politics of the city manager’s office means that issues of the natural world aren’t even being taken into consideration.

This awakening to the very present issues of the environment happened to dovetail with the gestation period for Hummingbird Salamander: “I think 2017 is when I wrote the first sections, and then as often happens with me and novels, I set something aside and there’s a period where I really think about what it is I’m writing. With this book, it was thinking about what kind of structure it was going to have and fleshing out Jane’s character and being really careful about that along the way. I just so happened to also go through this process of rewilding the yard of the new house and getting more involved in some of these issues.”

Jeff has been describing the book, even from some of the earliest press materials, as being set “roughly ten seconds into the future”—but when I ask him about the writing process, particularly in light of how the last year has disrupted things, he revises this to say that the book “kind of begins in our past, goes through our present, and into our future, in a way.” For all that, it manages to feel like our present (mentions of face-masks included) while not feeling stuck here. “There were certain decisions I made off the bat that I felt helped in not having to change very much to be in sync with what’s going on. One of those was that I wasn’t going to mention Trump’s name. I was going to find the distance at which I wasn’t mentioning anchors like that, which brings in all kinds of other stuff with it to the reader’s head.”

But there are still mischievous anchors, as he calls them, in the book—and out in the world, too. Long-time collaborator Jeremy Zerfoss helped create the illustrations in the book (and particularly the bonus content appearing in the Indie Bookstore Day edition) and the duo has masterfully blurred the line between the real and the fictional. He tells me about discovering a truly zany book that made its way into the novel as both a plot point and an illustration, a tome called Oddly Enough that basically encourages animals to die so that they can become fur. And shortly after our conversation, I saw Jeff post a photograph of a building in Berlin with posters pasted to the wall—including one that looks remarkably like an artist’s interpretation of a diagram drawn by Silvina, the eco-activist/eco-terrorist who looms over the entire novel.

Before I let him go, I ask him the big question, the one my friends and I can’t seem to stop asking one another these days: do you have hope?

He’s quiet for a minute when I ask this and his answer, at first, seems final: “I think one reason not to hope is the fact that so many scientists are now saying, ‘oh, put the idea of hope aside, we just need to do whatever we can to not have the worst possible outcome.’”

But he tilts his head and goes on, leaving me with something I haven’t stopped thinking about: “That’s also really the true way to look at it, I think: there’s no moment of no return. These systems that we live within are so complex and the feedback loops are horrifying right now in terms of how things interplay with one another. But there might be some that are less so. And those of us who have the privilege to still be able to sometimes talk about these things in a hideously theoretical way and not be living them to do whatever the hell we can.

“Because the other thing is that animals experience time in a different way. And I have said this before, but a possum that lives three years—if I can make three generations of possums not realize there’s climate change, or if I can preserve a plant, to a point where maybe we can get past this? That’s what we’re working on now, a lot of us and a lot of conservation groups too. Trying to do things that mean that if we can get past this, there will be a lot of things left to treasure.

“It’s really easy to freeze up and feel like there’s so many things you have to do all at once, and you can’t do that, you have to focus. So my rule of thumb is just simply to do something local, to the yard, every week. I try to do something every month that’s local to the region—politics or anything else. And then I’m also continually trying to do things strategically to help on a worldwide level. Just trying to make a little bit of difference, and I do think it does add up over time.”

Drew Broussard is a writer, producer/curator of humanities programming, musician, and the co-host of the podcast So Many Damn Books. He lives in New York, with his fiancée and a dog named Ziggy Stardust.

5 Audiobooks for Celebrating the Stories of Trailblazing Women 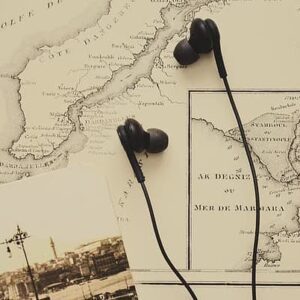 5 Audiobooks for Celebrating the Stories of Trailblazing Women In an attempt to take the subject beyond March, this month’s audiobook recommendations shine a light on women’s history,...
© LitHub
Back to top