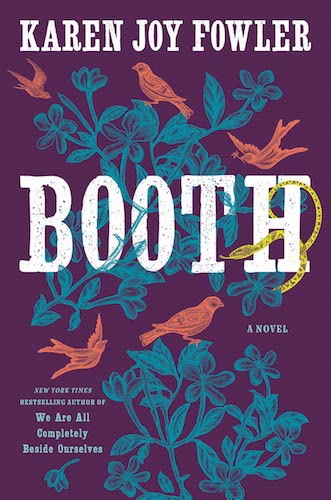 The following is excerpted from Karen Joy Fowler's new novel Booth. Fowler is The New York Times bestselling author of six novels, including The Jane Austen Book Club and We Are All Completely Beside Ourselves, which was the winner of the PEN/Faulkner Award and shortlisted for the Man Booker Prize. She lives in Santa Cruz, California.

Rosalie, the oldest daughter, is sitting on the steps that lead down to Beech Spring, watching her baby brother and sister make boats out of leaves. She is thinking of Ophelia, drifting in her sodden gown, her hair spread over the water, her face surrounded by flowers. She is dreaming of what it would be like to be beautiful and dead. The month is March, the year 1838. In July, Rosalie will be fifteen years old. She finds Love Tragic more satisfying to contemplate than Love Triumphant.

Rosalie is neither dead nor beautiful though the first is easier for her to imagine than the second. She resembles her father and her older brother, but in miniature, and with little feminizing of their features. Reclusive, reticent, stocky, she is not witty and graceful like the rest. Nothing is expected of her, except that she be a good girl and a help to her mother. She wants little attention and gets less-the most unremarkable child in this remarkable family.

The long winter is just coming to its end. The blackbirds have arrived, the robins are expected, and Rosalie feels the turn in her breath, in her bones. She is not quite happy, but surprisingly close to it. She feels light. Perhaps the bad times are over.

The moment she registers the feeling, it slips away. There is a palpable relief whenever Father leaves on tour. Mail day is the exception. By noon, Mother will be reading a letter from Father. The letter will be good or it will be bad. Mother will need her desperately or she won’t need her at all.

The sky above the trees is pale and bare and skims in reflection over the flat surface of the water. It’s not a warm day, but it’s a dry one. Rosalie is wearing her shawl, her bonnet, and a pair of sturdy boots that were bought some years ago for her brother June.

At sixteen, June is the oldest child. He’s off in the barley fields this morning, because Father has read an article on some new fertilizing technique and so it must be tried at once. Father is al­ways impatient for the completion of projects in which he has no part. He often berates his own father for lack of industry. Father thinks Grandfather drinks too much.

Grandfather thinks the same of Father. They quarrel about this endlessly whenever Father is home, often from their custom­ary chairs at the Churchville Tavern, where all such arguments can be fueled by the jolly god.

Rosalie doesn’t know where her grandfather is just now. Since her little brother Henry Byron died, Grandfather is often hard to find, and mostly they don’t look. He comes. He goes. Sometimes he misses a meal, but not often. He used to give the children les­sons, but really this was just for Henry; none of the other children are promising enough to interest him. Not June, who is more brawn than brains, a handsome, genial disappointment they once hoped would be a doctor or lawyer. Certainly not Rosalie.

Upslope, Mother appears at the door of the cabin, stands looking across the lawn. Her arms curve around her belly, holding it up like a great globe. She can’t put on her shoes now or hook the laces without Rosalie’s help.

Her face is in the sun, her eyes closed to better enjoy the warmth. She looks tired, but peaceful. She looks, just for the moment, like a young girl. “Someone is having a busy morning,” she says, “swimming about in there.” And then, opening her eyes, aging instantly back into her cares and worries, “Don’t let Asia play so near the water.” She vanishes back into the dark cabin.

As if Rosalie is not watching every move Asia makes.

As if Asia will do anything Rosalie asks! Asia is the youngest, if you don’t count the swimmer in Mother’s belly. Two years old, but only recently named and Rosalie still isn’t used to thinking of her as Asia. Her parents had settled on Ayesha, or maybe Sid­ney, unable to choose between the two. Then suddenly, a letter from Father. “Let her be called Asia,” he wrote, “because God first walked with man on that continent. With Frigga for a middle name since she was born on a Friday.” Mother wasn’t entirely pleased so they surreptitiously call her Asia Sidney now, and will until she’s grown enough to bear the full weight of Frigga.

In point of fact, Asia was born on a Thursday.

Edwin, Rosalie’s little brother, is four. Edwin is crying, which he does the way he does all things, quietly. He’s been trying to collect pebbles and seed pods to be passengers in his boats, but Asia keeps taking them and throwing them into the spring.

Rosalie comes to kneel beside him, pushes up her sleeve with one hand, and reaches into the cold water with the other. She’s distracted momentarily by the magic of her fingers elongating and refracting. Asia cannot throw well. Edwin’s pebbles are eas­ily rescued. She hands three back to him, wiping her cold hand on the hem of her skirt.

This makes Asia so angry she can’t even speak. She points to the water and sobs. She stamps her feet and screams. Mother comes to the door again. “We’re all fine here,” Rosalie says, but she speaks so softly that only Asia and Edwin hear her. What she says makes Asia even louder and angrier since it isn’t at all true.

All two-year-olds have terrible tempers, Mother says, but the others didn’t, not like this. In the face of Asia’s fury, Edwin sur­renders his boats and his pebbles. Asia has them. all now. Her cheeks dry in an instant. Already she has the beauty Rosalie lacks, dark hair, dark, shining eyes.

So does Edwin, who comes to lean against Rosalie, his bony shoulder cutting sharply into her upper arm. He smells like the biscuits they had at breakfast. Mrs. Elijah Rogers, their neighbor, had to teach Mother to make biscuits and cornbread on the kitch­en’s hearth when she first arrived at the farm. Now she’s teaching Rosalie. A childless woman herself, she dotes on the Booths, all of whom call her Aunty. “I don’t think your 111. other had ever cooked before,” Aunty Rogers once told Rosalie, either to let her know that Mother was a real lady or else that Mother had been strangely incompetent by Bel Air standards; Rosalie has never been sure which was being conveyed. Mother’s biscuits are fine now, but not as good as Aunty Rogers’. Or, to be honest, Rosalie’s.

“The frog is sleeping, ” Edwin says. This doesn’t sound like a question, but is. He wants to be told he is right. Edwin only asks questions when he already knows the answers.

“Old Mr. Bullfrog sleeps through the winter,” Rosalie says. “He only wakes up when summer comes.”

Bullfrogs don’t live a hundred years. They are lucky to make eight. Grandfather says so. And yet Rosalie cannot remember a summer out of earshot of the enormous, bulbous frog. On warm evenings, when the insects are humming and the birds calling and the water rushing and the wind blowing and the trees rus­tling and the cows bawling, still that deep, booming groan can be heard. Neighbors a mile distant complain of the noise.

“At least a hundred years. He saw the American Revolution with his very own eyes. He drank the tea in the Boston Harbor.” Rosalie feels her voice strangling in her throat. Henry Byron had always been the author of Old Mr. Bullfrog’s rich and conse­quential past.

Some neighbors once approached Father with a request that the frog be killed in the cause of peace and quiet. Father refused. The farm is a sanctuary for all God’s creatures, even the copperhead snakes. Father doesn’t believe in eating meat and once, Mother says, rose up in a saloon to point his finger at a man enjoying a plate of oysters. “Murderer! Murderer! Murderer!” Father said in the same voice he used to play Macbeth. Sometimes you think Father might be joking, but you never can be sure.

Asia has finished throwing all of Edwin’s boats and stones into the water. She turns in his direction a face shining with triumph, but immediately clouds over with the realization that Edwin hasn’t been watching. She steps towards them and Rosalie shifts Edwin to her other side so he can’t be pushed about. His knees soften until he’s sitting in her lap. Asia comes to do the same, crowding into Rosalie’s arms, taking up as much room as she can. Heat pours off her. Rosalie feels Edwin becoming smaller.

“Do you want to hear about you?” she asks him. He does. It’s his favorite story.

“On the night you were born,” she says, “Father was in New York being Richard III.”

Rosalie remembers it as a terrifying night, but that’s not the way she tells it. She skips the difficulties of the birth, Mother’s agony, the moment the midwife told June to ride for the doctor. She skips the icy ground and her fear that June was riding too fast and the horse would lose her footing, or not fast enough and the doctor would arrive too late. Mother had had six other children and never needed the doctor before.

Rosalie tells Edwin instead that there was a shower of stars that night, lasting more than an hour. How, just as June was leav­ing, a great meteor exploded over Baltimore-Rosalie throws open her hands to show the explosion-and June rode on while the sky above him rained down stars.

She says that Edwin is the family’s seventh child and that he arrived with his caul still over his face. The caul has been saved in a small box in her mother’s cupboard. It has the feel of a well­ worn handkerchief Edwin has been shown this, but he won’t be allowed to touch it until he is older.

All these things, Rosalie says-the stars, the caul, the number seven-they mark Edwin as extraordinary. “This child will see ghosts,” the midwife had said when the doctor had gone and she was again in charge. “He will never drown. Men everywhere will know his name.” She took Edwin and swaddled him more tightly. There was something reverential, ceremonial, in the way she handed him back.

Before, Rosalie has always left out the part about seeing ghosts. Today she forgets. She feels Edwin stiffen at this news. So far, he’s shown no evidence of greatness. He’s an inactive, fragile, anxious boy.

The ten-year gap between Rosalie and Edwin is where all the dead children are.

19 new books to get lost in this week.

The Leopard Is Loose by Stephen Harrigan, Read by George Guidall 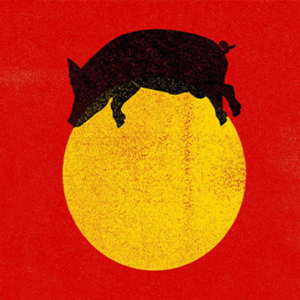 19 new books to get lost in this week. Here are a few new books roaring in like a lion this week! With new books from NoViolet Bulawayo, Ladee Hubbard, Tara Isabella...
© LitHub
Back to top