Bookselling in the 21st Century: When Your Bookstore Gets Robbed

The True Tale of a Theft in Texas, a Community That Came Together

Anything can happen in twelve hours. Twelve hours: we close the doors on Sunday, September 18, and arrive the next morning to find the front door shattered. Inside, the usual signs of petty theft: the cash register broken, anything that had been locked now torn open like a wound. That call—the one that demands leaving the house without a shower, that summons for police reports—is never wanted, but it comes regardless.

No victims, no suspects, no witnesses. It is just a thing that happened. A thing happened and we did what is done when things happen: fret some and plan our next move. Phone calls are made; emails are sent. We do what we are supposed to do and hope the rest of the Monday is kind. We gather in front of the now pixelated front door and take a photo for our social media: six of us put up our middle fingers at someone who may well never see them. We tweet, “To whoever broke into our store & took our monies & hurt our door—screw you! #IndieBookstores #riseabove #alsowhy”

We laugh and it is enough. In Tacoma, Washington, fellow indie bookseller Kenny Coble sees our post, calls the store to order a book, and posts this tweet: “Someone broke into one of my favorite bookstores, @BrazosBookstore. Let’s show them some love and buy a book. brazosbookstore.com.” The hope? That a few people might follow his lead.

Coble, after all, has over 4,500 followers, but often it is hard to measure what that means outside the abstract non-country that is the internet. Soon, we find out. Twelve hours: Coble posts one tweet, and 21 people from 13 different states order from our website. Some orders are from friends—you know who you are—but many more are from people who have never been to our store, or even the state of Texas. A few orders arrive from Litsy members (despite that we have yet to create a Litsy account).

It was not always like this, as Scott Esposito can attest. Founder of Quarterly Conversation, Director of Publicity and Senior Editor at Two Lines Press, and author of The Surrender, whose original publication was funded partially by Kickstarter, owes much to the internet. When I ask him about social media over email, his response is that social media is “the glue that holds it all together.” He reminds me that 20 years ago, it would be impossible to have “regular, day-to-day interactions with people in Los Angeles, Houston, New York, Paris, Melbourne,” where we can trade book recommendations and quotes we love “without paying thousands of dollars” to do it.

What social media does, Esposito says, is “[allow] a new kind of group consciousness to arise among the different parts of the literary worlds… the emergence of various online literary scenes that are not bounded by geography.” Today, the book community now reaches beyond publishers, bookstores, state lines, or any other arbitrary limits. That is how people from Ohio and Massachusetts can cross another book off their To Be Read pile by poking through our online store, because we are part of the book community which has no borders. “When I saw what was happening with Brazos… I thought how much I love being in this community and how many good people there are here who care about things and will take the time to do the right thing,” Esposito writes.

Total, we had almost 30 orders from 14 states and one from D.C. We had retweets from readers, writers, booksellers, bookstores, publishers, literary magazines, publicists, every type of bookish citizen. At the time of this article, our original tweet had over one hundred retweets with over three hundred likes. In what other industry could this happen? In what other time could this happen?

Perhaps most surprising was the kind note we received from the lovely Valeria Luiselli, author of many titles including The Story of My Teeth. In an email addressed to store manager Mark Haber, she writes, “my humble contribution to Brazos’s convalescence” and attached this talisman, a relic from the days when she dreamed of opening her own bookstore:

Stealing books is a centenary Practice. It is not a good Practice, though in some cases it can be deemed respectable, as it may come to constitute a form of redistribution of our greatest Wealth. But even in a trade like this one, there is a Code of Conduct. Any Bibliopirate worthy of his or her Guild, must follow at least three norms:

1) Never steal a book by an author who is still alive.

2) Never steal a book published by an Independent Press.

3) Never steal a book from an Independent Bookstore.

Annalia Luna is currently the shipping and returns manager at Brazos Bookstore. She received her B.A. in Music & Literature from Butler University. Her work has been published or is forthcoming at The Rumpus, Ploughshares, and Heavy Feather Review. She lives and writes in Houston, TX.

Interview with a Gatekeeper: Matt Weiland, Lover of Soccer and Talking Rabbits 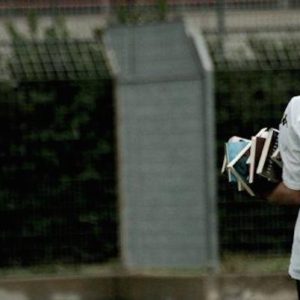 Interview with a Gatekeeper: Matt Weiland, Lover of Soccer and Talking Rabbits

Matt Weiland, Vice President and Senior Editor at W.W. Norton brings to his work the energy and mindset of a midfielder in a soccer...
© LitHub
Back to top