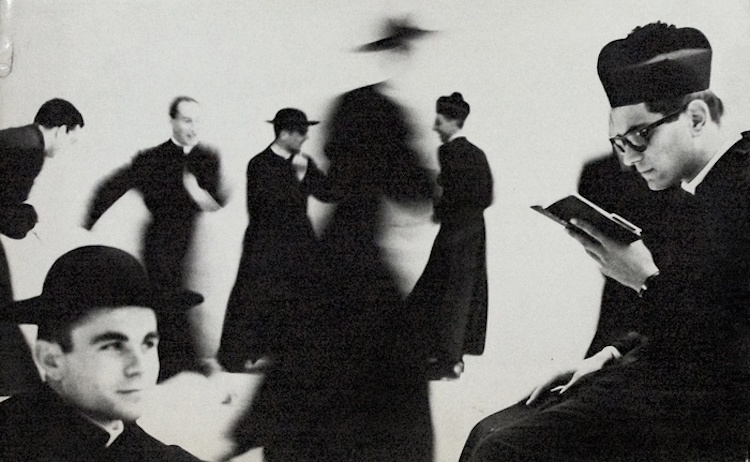 Bookselling in the 21st Century: From the Seminary to the Bookstore

Brad Johnson Finds His Calling in the Unlikeliest Place

I grew up in a family with little ambitions;
or it could have just been the neighborhood
suburban sciatica

Stop me if you’ve heard this:
“I was different from everybody around me”

Would that we were equal
rounding up or down to cook the books,
to the ambitions we imagine for ourselves.

If I spent the first act of my adult life in pursuit of a shadow, the second was in search of prey. Or maybe I have that backward.

First, the shadow. My step from preacher to apostate was not Miltonic. I delivered my first sermon before I ever needed to shave. Truth be told, I felt “called” (by the Lord, you understand) to preach far more clearly than I ever had to repent and/or be saved. My theological undoing may have begun with a sense that confession takes priority over forgiveness. Saint Augustine is but a name made possible by Augustine’s Confessions. There is no wayward soul to save without the soul wayward. That confession creates the world as we know it puts the tragic bite into most creation myths. Maybe that is why most good stories are confessing something. The same with preaching. At any rate, halfway through a seminary Christology course, the world of sin in creation, I believed without question. The other half, the world of sin being saved, I questioned without belief. Freed from all that informs religion, but not its actual form. Which is to say, I got an A. In fact, I graduated with begrudging honors.

Several years later, it was my doctoral advisor who first recognized, or at least said as much, that the words I used to talk about theology were not the ones theologians did. With that, I knew my academic path was set. My background too conservatively religious, my interests too extravagantly my own, I pursued an academic job post like a hunter squeamish at the sight of blood. The prey paid me no mind. A couple of adjunct teaching positions, countless CVs, a few awkward interviews, and suddenly I awoke, depressively sick, at a data-entry temp job for for a tech company. I felt old much too young. For the first time, even after no longer believing in the Lord who did such, I didn’t feel “called” to anything in particular. My talents were spent.

Latter days tend to color all the others, to come or gone. The accumulations along the way, of time, yes, but also old photos and grievances, wind round less like a clock than gauze. Wounds mend. While I still consider my pursuits of academia and religious devotion to be failures, I do so differently than before I became a bookseller. A broken mold is still destroyed, after all, even if something different comes of its remains. This “something different” remains in process, but its form is taking shape as a calling recast as a vocation.

A high-minded word, that, vocation. Not as easily quantified as the job that fills the hours that measure out the pay, it is rarely a part of the Craigslist advert. Unsurprisingly, then, I began bookselling in much the way others have. Though my unemployment claims were running their course, my bill cycles were not. And, of course, I liked talking about books. Oh, and let’s not forget their smelly whiff! All those things interviewees say: I ticked the box like all the rest. I, too, messed up the register until I no longer (or less often) did. I was lost in the children’s section. The reading tastes of teenagers intimidated me. I excelled at formally introducing authors, but failed at asking if they’d like some water. I suggested we dust more often the same day I’d forgotten to do so. I thought I knew better about things I’d previously never even thought about.

So the workaday tasks snuck into tomorrow’s want-to-dos, the daily drudgeries became disciplines.

That bookselling might be considered a proper profession came as no surprise. After all, it’s not uncommon for an angularly coifed and expensively tailored lawyer (or some such lot) to say, in the benign way off-the-cuff sincerity sometimes does, that “I’d love to have a job like yours.” None of the career paths I’d trod nearly into my forties had promised riches at the end either. We professionalize ideals all the time, and put the thumb on the scale of success if it comes time to measure. Nor is it my intention to define when a job becomes a profession (or how a profession slips into a vocation). For that matter, neither are the transitions necessarily graduations to higher levels. Even as videogames become more visually realistic, with their next-levels and beginner-thru-advanced modes, one plays them expressly because they’re not like real life. That bookselling might be related to the calling I’d failed or failed me, however, is a surprise with which I’m still reckoning.

Not unrelated: I was never good at evangelism, spreading the Gospel, the Good News.

To this day I am wary of the term “hand-sell,” though we use it often in the bookstore world. I am, though, pretty good at it. (More perversely still, I like doing it!) My reading and recommendations gravitate toward books with ideas or voices usually kept silent. Public confession, to me, never being so loud as when private, I am drawn to the quirk and the kink of unspoken interiority. My responsibility to such books—they are literally in my care!—is palpably evangelistic in a way I never felt when it was explicitly religious.

You’re looking for an entertaining diversion, you say: why sure, look no further. I’ll be happy to help you! in the name of retail, commerce, and customer service. Ah, but you’re looking for something as-yet inexpressible but all the same necessary—so spoken in a variety of sighs and shrugs, usually over the course of a few visits: how long do you have? let’s move about the store and talk. this could take a while.

Any bookstore worth its salt knows what books are being discussed within its community, and will have them readily available. This is the job of good bookselling. (Professional bookselling presents them nicely, tidied from dust and set alongside books that might pair nicely.) Doing it well keeps the lights burning at your store. Creating a desire that the store itself isn’t in the business of selling—a curiosity not measured by knowledge, an experience not captured by a lens—is what compels me, though, to turn the lights on in the first place.

Not long before I became a bookseller, I briefly attended a local Congregationalist church. At some point against my better judgment, I accepted the invitation one Sunday to lead prayer. Reluctant to prepare notes when speaking in front of people, I prefer to fight my way out of self-imposed corners. In this instance, I heard myself saying to a small room of scalps and closed eyes that we should perhaps be looking at one another when we pray (none did)—that if all this has any power at all, it is in the telling of the concern or the joy to one another—that we offer praise, such as it is, by listening to one another—and that the prayer is answered, if it is at all, in the mysterious, untold ways that spill out of our having listened. I’ve no clue now how much consolation this humanist hokum offered the woman who asked that we pray for her dying dad, for a healing hand, were her words. Looking back now, denying the spiritual seeker her succor, at this site of refuge, was probably cruel. I left the church again soon thereafter.

It’s difficult to make this next point without sounding like a sales consultant, but here goes. Whether you’re a university lecturer, curbside evangelist, or bookseller, the key remains the same: meet people where they are, not where you want them to be. I was fortunate in this respect to begin bookselling at such a broken state I couldn’t imagine anybody being interested in what I read. Listening first, and inhabiting a bit of silence before responding to requests for “Books with absolutely no death in them at all” or “Poetry that will make me think but not bum me out” or “I hate Hemingway, so anything that’s not like that,” I never so cherished my educational and pastoral failures. Because as much as we may love the stereotype of the bookish grouch, quick with a jokey sneer or snooty jab, both of which I’m very adept with, I’ve mostly avoided the temptation. It became a relief that so few people seemed to share my interests (I discovered later my interests were not so spectacular), the divide provoking a curiosity about the tastes of others I never had before. They didn’t want or need my recommendations. They wanted a way to express something that they needed.

In the process, people shared more with me more than I think they intended. They were visiting the sick or dying; remembering the dead; trying to forget. They loved their children; were in-between partners; were happy. They made enough money they could finally afford unhappiness; so little they couldn’t meet rent; just enough for the new Ferrante. They were intellectually curious; attention deprived; sweaty from yoga. Few strained for wit or went for a laugh. The constraints of our relationship, even for regulars, were clear. We may pass in the streets and barely remember where we know one another, the merest nod and smile, but this moment anyway means something.

To be clear: I don’t think most of this has much to do with me. No one’s past is simply their own. Time winds around us, but it in the process weaves us together. It binds us, not unlike a book, if we’re to risk the metaphor. Or better still, the space a book inhabits.

In truth, maybe none of this is specifically about bookselling. But it is about a bookseller.

to prefer not:
(heroic in the most incarcerated sense)
to see more in life than life itself offers:
(a good definition of creativity)
(but also delusion)
for a chance
(in the vicariousness of another’s memory)
there’s a value never so simple as a wage.

Brad Johnson is the proprietor of East Bay Booksellers in Oakland. 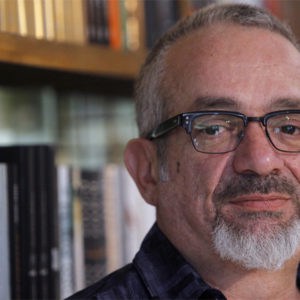 This interview was conducted at the Bookstan conference in Sarajevo and over email.    John Freeman: Good evening....
© LitHub
Back to top