My first book, Upright Beasts, features 25 tales of animals, monsters, and beastly humans. Needless to say, I like a bit of beast in my books. In this list, I’m going to suggest some beast-filled books that you maybe haven’t read before. (You probably don’t need me to tell you about the existence of Moby-Dick or Watership Down, and if you do there are larger problems that a reading list like this won’t fix.)

Heart of a Dog, Mikhail Bulgakov

You’ve likely heard of The Master and Margarita (which features a beastly demon cat named Behemoth), but a lesser-read Bulgakov gem is Heart of a Dog. This satirical science fiction novel mocks the Soviet bureaucracy with the tale of a dog that is given human glands and testicles, transforming into a slovenly government worker who kills stray cats to provide coats for the Russian working class. Unsurprisingly, the book was banned. It was only published in the Soviet Union decades after Bulgakov’s death.

North American Lake Monsters is one of those collections that everyone who reads it loves, but still remains sadly underread—perhaps because the stories are too horrifying to be “literary fiction” but too literary for some horror fans. A kind of Raymond Carver by way of Stephen King collection, these are dark, sad stories about working class characters struggling with tragedies both supernatural and of their own making. Werewolves, lake monsters, and other beasts appear, but the focus is on the human characters and their pained, bleeding hearts. If literary horror appeals to you, run and buy this today. You’ll devour it as it devours you.

In this collection, America’s queen of crime lets animals plot the murders. The victims in this story are oppressors: animal abusers who find their ultimate end at the paws and hooves of circus animals, pets, and even a horde of angry hamsters. Honestly, this is a pretty uneven collection, more so than just the typical way story collections are inherently uneven. But several of the stories are fantastic, and you have to admire the focus of this collection. It is darkly funny and oddly moving.

DeForge is one of the weirdest and most exciting comic creators around, and Ant Colony is his masterpiece. The story follows a cast of existential ants in an insect world where spiders have humongous wolf heads, centipedes are stretch limos, and ant queens are gigantic Lovecraftian horrors. Comics don’t get much more bizarre than this, but it’s also completely hilarious and gorgeously drawn. The art alone is a masterclass in composition and visual storytelling.

The Wallcreeper was the break-out book for Dorothy, a publishing project, a very small press that’s putting out some heavy hitters these days. Zink’s debut is a rambunctious, fast-paced, and hilarious novel about bird-watching ex-pats who become eco-terrorists in Europe. Zink’s style is a bit messy, but in the absolute best way. Literature needs a little chaos, and Zink’s prose feels so much more alive than your polished MFA lit fiction. The main characters spend a lot of time around birds, including a titular wallcreeper, and at one point the narrator describes her husband orgasming while “crying out like a dinosaur” so I’m going to count it as a beast book.

Mort(e) tells the simple story of a house cat who is turned into a human-sized assassin by a colony of super-intelligent ants based out of an island in the middle of the ocean that have been waiting for millennia to wage a war against humanity for control of the earth. Well, ok, maybe it isn’t that simple. But it is a moving book that takes what sounds like a B movie or comic farce plot and transforms it into a serious, intelligent, and moving story of what it means to be a human(oid).

Animals and animal transformations are staples of fairy tales, and many of the stories in Angela Carter’s utterly amazing collection of reinvented fairy tales feature beasts of one sort or another. Two of the stories, including my favorite, “The Tiger’s Bride,” are based on the Beauty and the Beast tale. These are not the cutesy fairy tale remixes that are so popular these days, but dark, sensual, and often nightmarish stories that attempt, in Carter’s words, to “extract the latent content from traditional stories.” 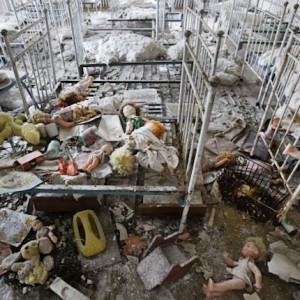 In the early and mid 1990s, Svetlana Alexievich recorded the stories of those who lived and worked around Chernobyl at the time...
© LitHub
Back to top
Loading Comments...