On today’s episode, Kristen talks with Hanif Abdurraqib, poet, essayist, and critic, about Vegas buffets, reconfiguring ideas around productivity, learning the limits of his own culinary abilities, and the concept of failure losing its meaning in this time.

Hanif Abdurraqib: I think what hasn’t been discussed that widely is just that we’re all experiencing communication fatigue. Like the lengths we have to go to in order to communicate now, instead of just bumping into friends or going over to people’s houses—I think there’s a fatigue in just, in order to talk to my best friends who live in my city, the lengths I have to go to… it’s a form of grief I think we’re experiencing. Just knowing that everyone I love is behind a screen for me, either a door or a computer—I think just that in and of itself is a different type of sadness entirely.

Hanif Abdurraqib is a poet, essayist, and cultural critic from Columbus, Ohio. His first poetry collection, The Crown Ain’t Worth Much, was named a finalist for the Eric Hoffer Book Award and was nominated for a Hurston-Wright Legacy Award. His collection of essays, They Can’t Kill Us Until They Kill Us, was named a book of 2017 by BuzzFeed, Esquire, NPR, O: The Oprah Magazine, and Pitchfork among others. His most recent book is Go Ahead in the Rain: Notes to A Tribe Called Quest.

The New York Public Library might quarantine books to keep COVID-19 from spreading.

Behind the Mic: On Separation Anxiety by Laura Zigman, read by Courtney Patterson 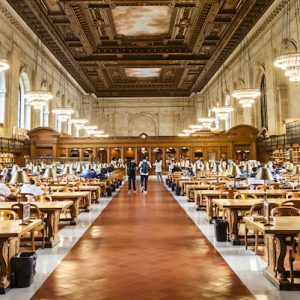 The New York Public Library might quarantine books to keep COVID-19 from spreading.

Quarantine: not just a thing for humans and those tigers at the Bronx Zoo. It turns out the New York Public Library may choose...
© LitHub
Back to top