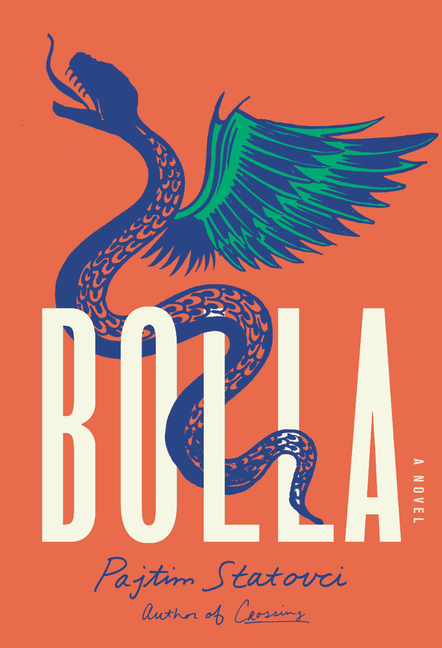 The following is excerpted from Pajtim Statovci's novel, translated by David Hackston. Statovci was born in Kosovo to Albanian parents in 1990. His family fled the Yugoslav wars and moved to Finland when he was two years old. His first book, My Cat Yugoslavia, won the Helsingin Sanomat Literature Prize for best debut novel, and his second novel, Crossing, was a finalist for the National Book Award. In 2018, he received the Helsinki Writer of the Year Award.

The first time I see him, he is crossing the street. What catches my eye is his sunken head, which hardly turns though the intersection is busy, then I notice his skinny body, which his string-like legs seem to pull behind them. His hair, parted down the center, looks like a pair of little wings, and he holds a pile of books against his chest; sometimes his other hand droops to the side, every once in a while he stuffs it in his pocket and pulls up his tight dark red velvet jeans.

I sit in the shade outside a café, and he walks toward me, the sun on his shoulders. I can make out the flicker in his eyes as he passes, the items in his pants pockets, the soft fuzz on his neck, his shaved arms. Then he walks onto the terrace and stands for a moment by a table at the other end of the nearly empty café. My cigarette burns down to the filter. He looks confused, as though he knows someone is observing him, and he yawns with his entire body, a deep inhalation that soon drowns like a faint puff of air behind the shyest fist I have ever seen, the palm lifted in front of his mouth opens out toward the road, like a slowly burgeoning flower, and only then does he place his books on the table and sit down.

It is early April, and I cannot take my eyes off him. He looks skittish and lost, as though he were living out an unpleasant dream, as though he keeps a different rhythm, different laws from those around him, and in his posture and gestures—the way he opens his books so gingerly, as though he is afraid of creasing their covers, the way he holds the pen he has taken from his pocket like a shard of broken crystal, how from time to time he presses his fingers against his temple and closes his eyes as if to give the impression of concentration, though I strongly suspect he is merely trying to refrain from looking around—there is something bare and untamed, something that speaks volumes yet remains unspoken.

I stand up and begin walking toward his table. I don’t understand how I even dare talk to a Serb, but somehow I feel compelled to make better acquaintance with him. “

Zdravo,” I say in Serbian.

“Hi,” he says in a bright voice, almost like that of my wife, his eyes fixed on the book lying open on the table, the text of which is so small and tightly typeset that I can’t make out what language it’s in.

“May I sit down?” I ask, and pull a chair from beneath the table.

“Sure,” he replies, glances around, then nods at the chair and looks me in the eye, and I think what an extraordinarily, magnificently beautiful man he is, his irises look like a sky preparing for a storm and his trimmed stubble combines with his reddish hair, neatly combed and groomed, his torso long like a horse’s, and his face perfectly proportioned, delicate and sweet. I can’t remember how much time has passed since his answer, how long I have been staring at him or he at me like friends who have been separated for decades.

“Miloš,” he says and grips my hand in his cold, bony fingers.

“Nice to meet you.” I release his hand and slide into his sad eyes, languid beneath his heavy, wrinkled eyelids.

The next hour feels more comfortable than any I have ever experienced. We order coffee, lower our voices, and when I see that his books are in English we switch languages. Though improbable, random even, it feels natural, because by speaking English we can be different people, we are no longer ourselves, we are free of this place, pages torn from a novel.

I discover that he is twenty-five, a year older than me, that he studies medicine at the University of Pristina, and that he will probably specialize in surgery, that he is from a small town called Kuršumlija on the other side of the border, thirty kilometers northeast of my hometown, Podujevo, which in turn is thirty kilometers northeast of Pristina, that in addition to his native language and English he speaks fluent German and even a smattering of Albanian.

I tell him perfectly normal things about myself too, the kind of things you would tell a new acquaintance: I tell him my age and where I come from, tell him that my father taught English and got me interested in languages and that one day I hope to work as a teacher of literature or a proofreader for a newspaper, and as I speak I can feel the glue of his eyes against my cheek, the way he scrutinizes my every movement, his back hunched, his head to one side, listening intently as though he were trying to memorize everything I said.

I tell him I study at the university too, literature, history, and English, or that I used to study there, I don’t know, and telling him this feels awkward and shameful as the university in which I enrolled years ago is no longer the same as the one where he studies, the place where we began our studies at around the same time.

After finishing our coffee, we look at each other for a while, and it feels right and real, unlike everything that Pristina has become, its streets filled with Serbian troops carrying assault rifles, tanks, and lines of military vehicles that look as though they have descended from space.

He smiles and I smile, and what we might look like right now doesn’t frighten us, at all, because we were meant to meet, I think, and maybe he thinks it too, there’s a reason the two of us happened upon this café at the same time.

At some point he asks the waiter for the bill, pays for my coffee, and says he has to visit the library before his next lecture.

“Do you want to come along?” he asks.

I don’t need anything at the library right now, but I say of course I’ll join him. We walk the short way, cross the street, and arrive at the university campus, step on the grass, whole chunks of which the years have gobbled up with gray, damp, worn stone slabs, and we climb the few steps up to the entrance to the library, which looks like it has been wrapped in a fishing net, and walk into the large, bright lobby as though into the inflamed jaws of an ancient monster. The floors are a grand marble mosaic and along the walls are round metallic roses that look on with a watchful gaze, like the eyes of the gods.

He walks slightly in front of me, and suddenly I grip him by the shoulder, as if I were a madman, a schizophrenic, there in the middle of the lobby, just like that, wholly out of character, without giving it a thought, right in the midst of the crowds of people filing out of the building, in the heart of the close, humid afternoon I really grab him, and he stops and only after a moment turns his head, looks first at my hand on his shoulder, the tips of my fingers resting on the arc of his collarbone, and then at me, and for that brief moment I am a completely different man—so alive, I say to myself, so much more alive than I have ever been before.

He is a Serb and I am an Albanian, and by rights we should be enemies, but now, as we touch, there is nothing between us that is strange or foreign to the other, and I have an unwavering certainty that we two, we are not like other people, and the feeling is so visceral, so bright and clear that it is as though it has come from on high, like a message addressed to us, and we don’t care in the least how many people roll their eyes or ask us to move out of the way, how many snigger as they pass us, perhaps at the fact that we are unable to form words, neither to them nor to each other.

And when he eventually asks whether I’d like to see him again in the same café next week around noon, when he allows his face to break into a hint of a smile, which he instantly tries to control like an inappropriate bout of laughter, to which I respond with a smile of my own and say, let’s meet a week from today in the same café, my life splits in two, into the life before him and the life after him, everything until this moment becoming an almost insignificant detail, surpassed like a hastily conjured white lie.

It is early April, and I desire another man so unmistakably that for the rest of the day he is with me in my prayers, in which I shamelessly ask god to give him to me.

Excerpted from Bolla by Pajtim Statovci, translated by David Hackston. Copyright © 2021 by Pajtim Statovci. All rights reserved. No part of this excerpt may be reproduced or reprinted without permission in writing from Pantheon Books.

The Maidens by Alex Michaelides, Read by Louise Brealey and Kobna Holdbrick-Smith 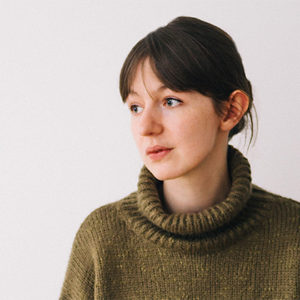 Sally Rooney hasn’t read your Internet novels. This week’s issue of The New Yorker features an excerpt of Sally Rooney’s forthcoming novel, Beautiful World, Where Are You....
© LitHub
Back to top