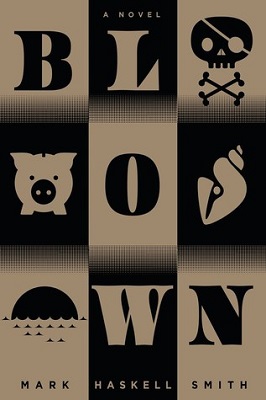 The following is from Mark Haskell Smith's novel, Blown. A story of offshore banking gone awry, Blown follows a Wall Street trader who disappears in the Cayman Islands with millions of dollars in stolen cash, and the madcap team of investigators pursuing him. Mark Haskell Smith is the author of six novels, including Salty, Raw, and Blown, and the nonfiction books Naked at Lunch and Heart of Dankness. He lives in Los Angeles.

Neal Nathanson thought about drinking his own urine. Isn’t that what you do when you’re out of water? Wasn’t that what the Chilean soccer team did when they crashed into the Andes? Or was it the Chilean miners? He was sure someone from Chile had survived some kind of ordeal by drinking piss.

He slumped back on the deck of the wrecked sailboat, lying like a corpse amid the twisted metal and cracked wood, the tangles of rope and cable, feeling the hull bob and roll, powerless against the swell and surge of the open ocean, the horizon bisecting the world into water and sky.

He wiped the salt spray off his glasses with his shirt and put them back on, blinking at the nighttime sky, looking at an infinity of stars and planets and galaxies and supernovas and black holes and red giants and white dwarfs and whatever else was up there. There were way too many, all piled on top of each other, and he didn’t recognize a single constellation.

He missed New York City. The traffic, the noise, the light pollution. The universe isn’t so vast and oppressive when you can’t see it.

Neal knew that ancient mariners had navigated by using the stars, and now that he thought of it, there was probably an app he could have downloaded about marine navigation but there wasn’t time. Besides, the boat was state of the art, with a full tech package: there was a backup hard drive for the computer, a streaming weather update, a satellite-guided navigation system with charts and maps, even an emergency distress signal; you could send an email and make phone calls. Of course none of the electronics worked once the seawater got in them.

He had no idea what happened to the sail. Torn off. Sucked into the abyss. Eaten by sea monsters. Who knew? The boat was destroyed. The interior cabin had been cracked like an eggshell, the doors blown off their hinges. Neal was grateful the thing still floated. But where was everyone? Had anyone else survived?

And what happened to Bryan LeBlanc? He started this. It was all his fault.

Neal picked a piece of peeling skin off his sunburnt forehead, rolled it between his fingers, and popped it in his mouth. It tasted salty, like prosciutto. It probably wasn’t the smartest thing to do, eating his own dead skin, but he’d been unable to catch a fish or a bird or even a fucking mosquito, and he was starving. Not starving like he used to feel on his way to dinner at some new bistro all the way out in Brooklyn; he was authentically starving, he hadn’t eaten in three days, not since he choked down the final chunk of moldy Camembert.

“He missed New York City. The traffic, the noise, the light pollution. The universe isn’t so vast and oppressive when you can’t see it.”

On the positive side, he’d surpassed his weight-loss goal. It was not easy to be upbeat in this situation, but he didn’t want to succumb to despair and be one of those guys you read about in the news who gave up and died. It had been easy when there was food on the boat. He’d managed to make it last for over a week, but now he’d gone days without eating anything. Weren’t there lots of stories about people adrift for months? How did they survive? He realized that he was experiencing an unhealthy level of anxiety. It felt like a panic attack.

Neal took a deep breath. He needed to be calm. Rational. This current state of affairs called for proactive solutions. He wasn’t going to lie there and wait for the seagulls to peck his eyes out. If he had to, if it came down to it, he’d drink a cup of piss. He rolled onto his belly and slowly pulled himself up. His legs were wobbly and he got dizzy if he stood too fast, so he took his time, using the wheel for balance, making his way into the cabin. The interior, which had once looked like a serene and stylish room in a boutique hotel, now resembled a bedroom after a tornado. Or the inside of a dumpster. He fished an empty wine bottle off the floor and made sure its screw-top fit. The bottle had to be airtight. That’s the first rule of flotation.

How many messages had he cast into the sea? So many he’d run out of paper. What could he say that he hadn’t already said? How could anyone rescue him if he didn’t know where he was? After rummaging in the cupboards he found a soggy paper bag and tried to write, but the paper disintegrated in his hand. He took out his wallet and removed his last business card. It still looked impressive, still said NEAL NATHANSON, DIRECTOR OF SPECIAL COLLECTIONS, and had the name of the investment bank he worked for, the Wall Street address, phone number, and email. He turned the card over and thought about what to write, wondering how to sum up his situation as clearly and succinctly as possible.

He wrote the word fucked on the back of the card and slid it into the bottle.

Neal screwed on the top, giving it an extra twist to make sure it was tight, then staggered to the doorway.

He looked at the boat. It had been a pretty awesome boat, sleek and unadorned, as if designed by a Scandinavian architect. A Beneteau Oceanis 38.1. Neal knew that because he’d found the owner’s manual. He wondered if it had any salvage value. Would his boss be able to recoup some of the money?

Neal figured that it would be the kind of boat he’d buy if he had an offshore account full of illegally skimmed millions and liked sailing, but he was now pretty sure he didn’t like sailing. He chucked the bottle out into the night and waited for the splash.

Neal might have dozed off, might have fallen into a mini-coma, if that’s even a medical condition, but he woke with a start. He blinked, trying to get the abrasive crunch of salt out of his desiccated eyes. Was that a light? In the near distance? He blinked again, wondering if he was hallucinating.

But the light continued to glow, moving on a course perpendicular to wherever the current was taking him.

He needed to send a signal. There was no power, no flare gun, no flashlight. Neal thought he could potentially ignite some tangles of rope, but they were hopelessly snagged in what was left of the rigging.

The dot of light was moving away. This required him to make an executive decision. He would explain it to his boss later. Neal hobbled into the hold and lifted one of the large duffel bags stacked on the floor. He reached into a cubby and took a bottle of lighter fluid—something he’d considered drinking only a day ago. He carried them out to the front of the boat— the prow was what they called it—and unzipped the bag. He knew the duffels contained a mix of currency; there were euros and dollars, yen and yuan, and a grab bag of bills from various Caribbean islands and Mexico. Neal upended the bag, and neatly wrapped bricks of money fell onto the deck. He recognized some notes from the Dominican Republic—old-school guys on one side and a building that looked like a bad hotel on the other—and some Jamaican bills that had a pissed-off black man in a suit and tie on the front. The stack was almost three feet high; it was a lot of money, over a million US, but like the saying goes, “You can’t take it with you if you’re dead and the seagulls are pecking your eyes out.”

“How many messages had he cast into the sea? So many he’d run out of paper. What could he say that he hadn’t already said? How could anyone rescue him if he didn’t know where he was?”

Besides, it wasn’t his money. Not exactly. Neal emptied the lighter fluid on the bills and struck a match. The stack ignited with a whoosh, sending him tumbling backward. He scrambled away from the flames, crawling aft toward the cockpit.

He stood and scanned the horizon. The dot was still there, still visible. Maybe not a mirage after all.

The smell of burning resin and wood jolted him. The currency was burning, but now part of the boat was too. For a brief moment Neal considered getting a fire extinguisher and putting it out. But then what?

As the prow began to burn with real intent, Neal dragged the remaining duffel bags out of the hold and stacked them at the rear of the boat. They weren’t that heavy, but there were nine of them. He stared at the bags. Why had he risked so much for money that wasn’t even his? What had he been thinking? A burst of flames shot up. He remembered the life raft he’d discovered when he still had the energy to scavenge. He dragged it out and opened the lid, triggering automatic inflation. The life raft began to grow bigger and bigger, crowding the cockpit, forcing him to move and shuffle and try not to get knocked overboard by the very thing meant to save him. It took all his strength, but he managed to shove it over the side and into the water. He was careful to tie it so it didn’t drift away and loaded the bags into it.

He looked toward the light. It appeared to be coming closer, but it was hard to see clearly now that the entire front half of the boat was engulfed in flames.

Chlöe zipped up her jacket and studied the guy she’d just hauled out of the life raft. He was, if she was being charitable, a fucking mess, ragged and smelly like kelp, like something that might wash up dead on a beach. She’d given him some water, warned him to drink slowly, and watched him guzzle it, puke all over himself, and then pass out on the deck. She didn’t know if he was unconscious or dead—not that it made much difference to her; she’d have to put him ashore as soon as she could.

She had watched his boat sink. Funny how the ocean snuffed out the flames so abruptly—one minute it was a raging inferno, flames shooting fifteen feet into the air, plumes of black smoke swirling off the heat, and then it was gone, the stars returning and the water calm. Like flicking a switch.

She bent down. He looked completely stonkered, his face sun-roasted and peeling with a patchy, scruffy beard, and his arms and legs were pocked with scrapes and scabs and festering cuts. She could tell he wasn’t a sailor; even in his emaciated state he was soft and doughy, like a corporate drone, a salary- man, maybe a dot-com billionaire trying to prove his manhood by going to sea. She could tell he was probably a nice-looking guy on a normal day. Cleaned up and drinking a bottle of Shiraz at a fancy restaurant, he might even be the kind of guy she found attractive. But then she liked men who were physically her equal, and they were hard to find.

From Blown. Used with permission of Grove Atlantic. Copyright © 2018 by Mark Haskell Smith. 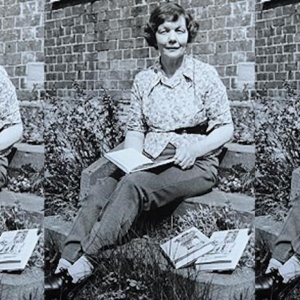