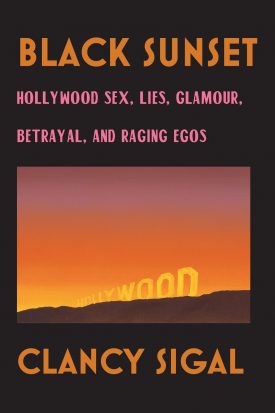 The following is from Clancy Sigal’s memoir, Black Sunset. Sigal is a PEN Lifetime Achievement winner and the author of Going Away, Zone of the Interior, Hemingway Lives! and other titles. He’s a former BBC reporter, and Professor Emeritus at the University of Southern California. He lives in Los Angeles with his wife and son.

Alright, listen up, people. Our fugitive has been on the run for ninety minutes. Average foot speed over uneven ground barring injuries is four miles per hour. . . .What I want from each and every one of you is a hard-target search. . . . Go get him.

—Tommy Lee Jones in The Fugitive (1993), based on TV series by Roy Huggins, whose successful television career begins when he hands over friends and colleagues to the House Un-American Activities Committee.

My heart is pounding, and I’m sweating in my Brooks Brothers blue pinstripe suit, broadcloth button-down shirt, Repp stripey tie, and buck shoes. A pair of twelve-inch, one-and-a-half-pound steel alloy bolt cutters in my jacket pocket feels as heavy as a .50 caliber machine gun base plate. The army taught me how to squeeze under wire to emplace Bangalore torpedoes, so it’s easy to slice through Universal Picture’s perimeter wire fence in San Fernando Valley where they’ve banned me for unethical, unscrupulous, underhanded behavior. I have earned the screaming purple-faced rage of the studio’s de facto ruler, story editor Ray Crossett, and his demonic rages at anyone like me who deals behind his back. Overfed and overbearing, Crossett’s bulge-veined tirades (“You pond scum! Cockroach!”) intimidate even Universal’s A-list producers, though technically he’s only a midlevel employee.

My crime? While negotiating for one of my screenwriter’s services I excused myself for a bathroom break in Crossett’s of office, crawled through the transom window, and raced to a public telephone to trade his offer for more money down the road at Warner Brothers. In a fury Crossett has set the dogs on me. Like fighter pilots, studio security guards scramble all over the lot, locking the gates. Riot in Cell Block 11. All it needs is a searchlight and a machine gun blazing from the guard tower; I grew up on prison movies.

I do this stuff all the time, it keeps me alive. I love the con, crises are my fuel. It’s the best high . . . and anesthetic.

At such moments I take on false identities to make it through a tense day. Now I’m a Chicago Bears running back nipping in and out of sound stages, bobbing and weaving behind equipment trucks, plunging into the maze of Universal’s false-front sets: from a cardboard Algiers kasbah’s onion domes with rifle ports I make a flying leap onto a at-roofed tower to slide down a standing plastic cobra to hide behind an Egyptian sarcophagus, tripping over a man-sized rubber tarantula and crashing through a straw- board wild wall straight into a cloth-wrapped mummy staring sightlessly at me. The studio’s Keystone Kops, fanning out, fail to spot the criminal crouching under a faro table in a Dodge City saloon when I sidestep into a shell-shattered World War I French village and dash across an alley onto a hot (closed) set where Tony Curtis and Janet Leigh, real- world husband and wife, are arguing with the director over a close-up for The Black Shield of Falworth—they must be wilting in all that fake armor and damsel-dress. Gosh, it’s hot in the Valley. I’m dripping.

On Falworth the revolving red light freezes me like an army reveille: I snap to attention respecting the industry’s First Commandment, to never mess up a shot. But I must sneak off this lot to call my client at home about his new quote (money), nail the deal before I’m nailed. Truthfully, I like lurking in the dark shadows of movie sets, like the sleeper “deep cover” spy that the US government accuses me of being. And I admire Ray Crossett for taking me so seriously, Gang Busters minus the sirens, although the studio maintains a battery of those for Soviet air raids if they come, which most people assume they will.

Sneak, thief, sneak. Duck under the fo’castle planks of Yankee Pasha, sprint smack into Joan Crawford—this freckle-faced woman in a white terrycloth robe, her hair turbaned in a towel, bent at the waist vomiting. Ah, yes, she’s in Female on the Beach where my Jaffe Talent Agency, for whom I hustle, signed the director Joe Pevney but not the writer or Crawford. Pity, what a package. Even without makeup, her sickie soaking the ground, Crawford is a stunner. Those carved-in-marble cheekbones and large angry bloodshot eyes. She honors me with the immortal line: “Get the fuck outta here!”

Mildred Pierce speaks! To me! My day is made.

Snaking in and out of the hangar-like cushioned doors of dark, cavernous stages, I trip over cables, flats, wild walls, hanging lights, and lynching-tree boom mics.

“LEGGO ME YOU PSYCHOTIC SONOFABITCH!” “I’M CRAZY? I’LL SHOW YOU CRAZY YOU CUNT!”

Our rising Jaffe Agency client, Jack Palance ($65,000 per picture), is jumping all over our client Shelley Winters ($80,000), strangling her on a prop couch while her cur- rent boyfriend (unrepped by us) Tony Franciosa pounds on Palance’s broad Estonian back, pulling at his skullcap while Shelley gurgles a death rattle, and our client Earl Holliman ($20,000) is piling on with the help of grips and gaffers, hauling frantically at the combatants. Franciosa hammers his fists, crashing down on the neck of Palance, who is throttling his female co-star. They’re supposed to be starring in I Died a Thousand Times, a remake of Colorado Territory, a remake of our client Bogart’s High Sierra, a remake of something else.

Zoom, I’m gone; someone else will have to solve our Palance problem. Last year, as Attila the Hun—or was it the Mexican bandit El Tigre?—he tossed his leading lady out of a second-floor window—or was it his wife? My über-boss, Sam Jaffe, who named the agency after himself (and why not), sighed, “Jack, such talent, such insanity.”

Enough for one day.

Out in the clear, easy prey for mortars and studio guards, from experience I’m sure exit gates will be guarded so I belly flop under the wire fence. My dry-cleaning bills are astronomical on the days I infiltrate Universal, easy now, suck in gut, and away we go . . . up and away loping past Department of Water & Power pipe layers, over to my old Pontiac parked across the street and with a ticket in the windshield wiper, which I toss.

Flip the hood, twist the idle screw, check the baling wire holding up the engine, jump behind the wheel, pray . . . clutch, stick, and pray some more.

Westbound on Ventura Boulevard, a glance in the rear-view mirror, can you believe that Ray Crossett? Two of his guys still chasing me in a late-model canary-yellow Chevy Club Deluxe, making no secret of it. When I speed up toward Laurel Canyon, they’re glued to my bumper. Crossett must be in some crazy mood.

Yes, I am an agent. Not Joseph Conrad’s Secret Agent or a CIA agent or FBI agent. But a talent agent, flesh peddler, ten-percenter, shark.

I work from a three-story Streamline Moderne building on Sunset Boulevard between gangster Mickey Cohen’s haberdashery and the Villa Nova, where Marilyn Monroe and Joe DiMaggio have their first date.

This is my job, to sell, spit into the air and see it come down as money, make deals, spin webs of truth and deceit, cut more deals, close more sales, get caught in a lie, fall on my face, you’ll never work in this town again . . . until tomorrow . . . and move on . . .

Because I eat only what I kill. I love it.

The Best Children's Books Appeal to All Ages 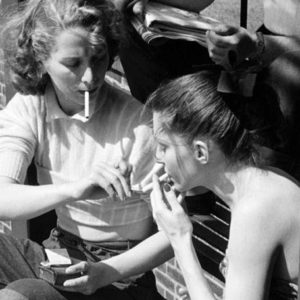 Joan Didion's Disaffected Literary Descendants The following essay originally appeared in Overland 225. If the "drift" narrative belongs to any generation proper,...
© LitHub
Back to top