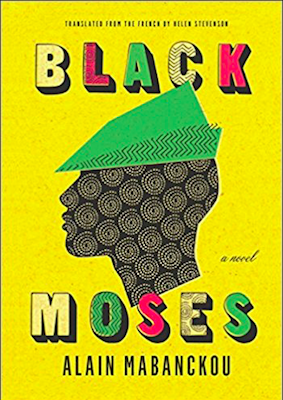 The following is from Alain Mabanckou’s novel, Black Moses. Black Moses follows the misfortunes of an orphan, Moses. At the orphanage where he lives, two fellow orphans twins terrorize him & the whole place is run by a malicious stooge. Alain Mabanckou teaches at UCLA. He is the author of six novels & in 2015 he was a finalist for the Man Booker International Prize.

In fact, until the year the Revolution fell on us like a rainfall which even the most celebrated fetishers hadn’t seen coming, I believed the orphanage at Loango was not an institution for minors who were parentless, or had been mistreated, or who had been born into a problem family, but rather a school for the very gifted. Bonaventure was more realistic, he said it was a place where they kept all the kids no one wanted, because if you love someone, if you want them, you take them out, go for walks with them, you don’t shut them up in some old building, as if they were in captivity. He based this on his own experience, and on his own inability to understand how a mother such as his own, who was still alive, could leave him there, surrounded by all these other boys and girls, each with their own ‘serious problem’, which led inevitably to their admission to Loango.

In my mind, our studies at Loango were designed to make us superior to most other children in the Congo. This was the impression we got from Dieudonné Ngoulmoumako. He liked to boast that he was Director of one of those public establishments whose academic results were equal in every way to those of the state primaries, secondaries and lycées. He’d puff out his chest and declare proudly that the masters and teachers at Loango earned more than their colleagues at the Charles-Miningou primary, Roger-Kimangou secondary and even the Pauline-Kengué lycée, the most prestigious lycée in Pointe-Noire. He was careful not to admit that if these teachers were indeed better paid, it was no thanks to the charity of the President of the Republic. The running  costs of the orphanage and the salaries of the staff were provided for by the descendants of the former kingdom of Loango, who wanted to show that their monarchy continued to exist, at least symbolically, through the generosity of its heirs. However, as I perceived it, our orphanage was separate from the rest of the Congo, in fact from the whole of the rest of the world. Since the school was in the hinterland, we knew nothing of the neighbouring agglomerations of Mabindou, Poumba, Loubou, Tchiyèndi, or our own economic capital, Pointe-Noire, which was spoken of as though it was the promised land Papa Moupelo used to talk to us about.

Yet the village of Loango was only about twenty kilometres from Pointe-Noire, and according to Monsieur Doukou Daka, our history teacher, it had once been the capital of the kingdom of Loango, founded in the 15th century by the ancestors of the vili people and other southerners. It was here that their descendants had been taken into slavery. Monsieur Doukou Daka raged against the whites who had taken our strongest men, our most beautiful women, and piled them up in the ship’s hold to make that dreadful voyage to the land of the Americas, where they were branded with irons, some had their legs amputated, some were left with only one arm, because they’d tried to run away, even though it would have been impossible to find the path back to their village.

Monsieur Doukou  Daka would turn  his back, lower his voice, and look out of the window, as though worried he might be overheard, then confide in us, in aggrieved tones, that many of the rich business people in Loango had been involved in the trafficking and had sent their sons to a region of France called Brittany to study the secrets of the trade.

‘You see,’ he’d murmur.  ‘Sometimes we were sold by our own people, and if ever, one day, you meet a black American, remember, he could be a member of your family!’

He seemed to bear a grudge against the vili, particularly since he himself was a Yombé, an ethnic group despised by the vili, who considered it a tribe of barbarians from the Mayombe forest. The vili and the Yombés, even though they were in the majority in the Kouilou region, each held the other responsible for the misfortunes of our ancestors.

We were shocked when, with his arms pressed to his sides, as though to emphasise his disappointment, Monsieur Doukou Daka shouted:

‘What’s more, the vili took the people of my own ethnic group into slavery and sold them to neighbouring kingdoms! So don’t come telling me that it was the white men who taught them about the bonds of slavery! White men still hadn’t arrived at that point. End of story!’

Then, to  lighten the  atmosphere  a little, since we were astounded to learn that blacks had sold blacks, he said we must wake up to the fact that we lived in a place that was drenched in History, that the former palace of the vili King was less than two kilometres from the orphanage, at Diosso, and that it had been transformed into a museum, which some of us would be lucky enough to visit in years to come, providing we passed our intermediate General School Certificate.

Meanwhile, in the school yard, the corridor supervisors began to notice that  most of the children talked constantly about Pointe-Noire, that magical and mysterious town, much praised by Monsieur Doukou Daka, who had been born there. In an attempt to remove any temptation we might feel to run away to this paradise on earth, they informed us that for our own good we had been separated from the children of the economic capital, and were being kept on an island, the most beautiful island in the world. If we escaped we would end up in the sea, devoured by the hungriest sharks in the Atlantic Ocean. The sharks were evil spirits, they told us, whose innate and fatal wickedness was stirred up by the sorcerers of Pointe-Noire. Why else would the bodies found on the Côte Sauvage be those of minors? The tragedy played out the same way every time: the victim-to-be came face to face with Mami Wata, half-woman, half-fish, who leapt up out of the sea, bare-breasted, with golden hair falling down about her shoulders and eyes as blue as the sky under the midday sun. The woman smiled at the child, opening wide her arms. As the child moved towards her, crying ‘Maman! Maman!’, she broke into laughter, its echo whipping up the waves to anger, so that suddenly they rose higher than the tallest apartment blocks, while the fish-woman abruptly transformed into a tough old shark, dragging the poor little sproglet down into the briny deep. The next day everyone would say it was Nzinga, the ancestress of the Kongo kingdom, who had taken the life of the hapless child, when in fact it was all the work of a few sorceresses from Pointe-Noire, wearing the mask of the one we were all descended from, so it looked as though she was to blame for the tragedy. The corridor supervisors exploited our fear and doubt, pointing out that when a kid vanished on the Côte Sauvage, people always said they’d been eaten by a shark sent by the ancestress, Nzinga, even if the body was discovered two days later, without a single scratch, spewed up and rejected by the sea.

Monsieur Doukou Daka laughed at these improbable stories – why, he asked us, would our ancestress Nzinga send us down into the deep belly of the ocean when she was mother to all of us, and had given birth to the great kingdom of Kongo? Why would she set upon children, when she already had three of her own: the twins, N’vita and Mpaânzu a Nimi, and a daughter, Lukeni Lwa Nimi? If she hadn’t had them, we’d never have had the Kongo people, and our country would never have existed, he concluded…

We were not surprised when Dieudonné Ngoulmoumako struck Monsieur Doukou Daka off the list of teachers at Loango, and sent him to his own town of Pointe-Noire, since he seemed so fond of it. The Director had explained to his staff, in a long letter, that our history teacher was an imposter who incited the children to run away from the orphanage and taught them to hate the vili, putting it about that they had collaborated with the whites in the slave trade and that the blacks also sold other blacks. Since the Department of School Inspections and the regional department of Primary and Secondary School Teachers was run by vili, it was not difficult for Dieudonné Ngoulmoumako to obtain the head of Monsieur Doukou Daka on a platter, and get him sent to a school in Mpaka, an outlying suburb of Pointe-Noire. Another history teacher, Monsieur Montoir, replaced him. He was white, and taught us mostly French history, featuring none of the characters Monsieur Doukou Daka had taught us about. There was no more kingdom of the Kongo, no more kingdom of Loango, and we heard no more about the vili, the Téké, the Yombé, and even less about our ancestress, Nzinga, and her children N’vita Numi, Mpaânzu a Nimi and Lukeni Lwa Nimi. It was in fact the first time many of us had ever seen a white man close up; we’d always thought people of that colour were imperialists working with the local lackeys to put a spoke in the wheels of our Revolution. The Director understood our concern and told us one day in his daily address, before the raising of the flag, and in the presence of a blushing Monsieur Montoir:

‘This white man is no imperialist, he is the exception that proves the rule, and at least what he teaches you will make you more intelligent than the little white children of France, because that imbecile Doukou Daka was an imposter, and I still wonder where he got his diploma from! Now, a nice round of applause for the white man!’

From Black Moses. Used with permission of The New Press. Copyright © 2017 by Alain Mabanckou.

Librarians of the 21st: The Ultimate Superheroes of Research

The Mysteries of the Pancreas: Of the Body, Cancer, and Death 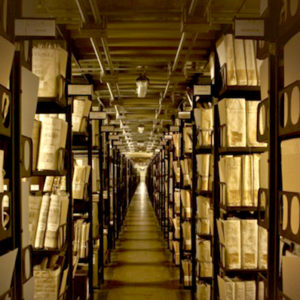 Librarians of the 21st: The Ultimate Superheroes of Research There’s a reason why, when you meet a librarian for the first time, she sometimes looks hesitant to tell you what she does...
© LitHub
Back to top