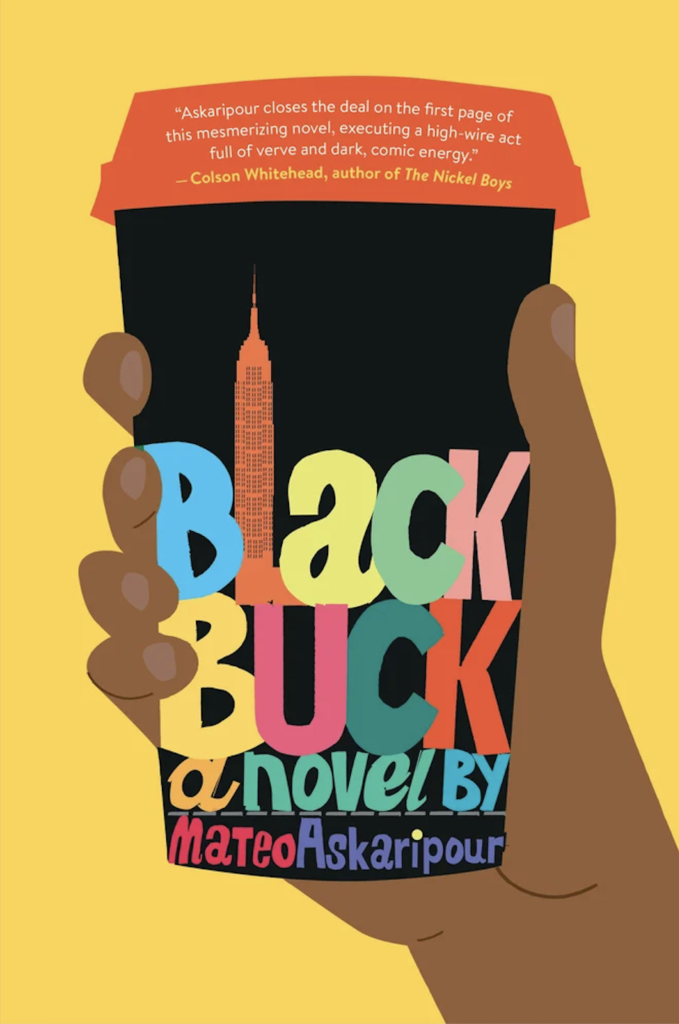 The following is excerpted from Mateo Askaripour's debut novel, Black Buck, a satire about a young man given a shot at stardom as the lone Black salesman at a mysterious, cult-like, and wildly successful startup. Askaripour was a 2018 Rhode Island Writers Colony writer-in-residence, and his writing has appeared in Entrepreneur, Lit Hub, Catapult, and The Rumpus, among others. He lives in Brooklyn.

I stood in the elevator bay without a clue what to do. There I was in the plaid button-up, denim jeans, and Saucony running shoes Ma had picked out for me. I took a breath and opened the doors.

Why the hell is she calling me Buck? But I had no time for questions. I was shaking worse than Jack at the end of Titanic. And there would be no one to save me either.

I walked toward the heavy wooden door on the left. But before I opened it, Rhett shook his head, pointing to the other side of the room. I walked the length of the glass wall, everyone’s eyes still on me, and opened the other door.

Every single leather-backed chair around the mahogany table had an ass in it. Every inch of the marble counter below the flat-screen TV was occupied. Every heater in front of the windows had someone on it. Some people smiled, others covered their mouths in horror, and a few seemed to be praying for me. And, I shit you not, every single person was white.

I looked across the room at Rhett. Clyde sat next to him, beaming. “Why are you late?” Rhett asked.

“This is going to be good,” one girl whispered to another.

“Um, the train. Someone got sick on the one in front of me.” I looked around the room to see if it was an acceptable answer.

He closed his eyes and nodded. “Ah. Got it. The train. No worries. Take a seat and we’ll begin.”

I wiped the sweat off my forehead and sat on the floor. “Get the fuck up!” Rhett yelled, charging toward me.

“Are you out of your fucking mind? We start at 7 a.m. sharp. Every single Monday of the year. Not thirty seconds late. Not one minute late. And sure as hell not three minutes late. Where the fuck do you think you are? The first floor?”

I stood in the elevator bay without a clue what to do.

My mouth went dry. I couldn’t do anything except look at my feet. “Look at me!” Rhett shouted, red in the face with a vein jumping around his forehead and threatening to explode into an aneurysm. “If you are ever late to a Monday-morning meeting again, I mean point-two nanoseconds late, every single person in here, all fucking one hundred five of them, will have to do push-ups until their arms are so sore, they won’t be able to pick up their phones. And you’ll have to watch them until they collapse. And then, after that, I’m going to fire your ass. Understood?”

I nodded so hard that I almost snapped my neck.

“Now,” he said, straightening out his shirt and walking back to his chair. “Everyone, this is one of our four new SDRs, Darren Vender.”

“Why Buck?” a pasty white girl across the room asked.

“Because if he does his job, he’ll make us each a million bucks,” Clyde replied, winking at me.

“Right,” Rhett said, nodding. “This is Buck. Are our other three SDRs here?”

Three people seated on the floor below me, two white guys and a tall blonde girl, raised their hands.

“You see?” Rhett said. “They made it on time. Did you three take the subway?”

“And they took the subway! Just like you, Buck. Except they weren’t late. You three, stand up and join Buck.”

They stood and looked around the room — nervous sheep who’d just seen one of their own slaughtered.

“State your name and one fucking fun fact about you,” Rhett commanded.

“Did your balls just drop, kid?” Rhett asked. The room’s laughter shot up ten decibels, and he got red in the face and started clearing his throat over and over again like he’d swallowed a chicken bone. The laughter got louder and louder.

White Guy Number One’s shoulders folded, and he leaned over like he was going to puke. But instead of blowing grits all over the floor, he grabbed his bag, pushed me out of the way, and ran into the stairwell.

Rhett laughed. “That’s going to be a long walk down.”

My mouth went dry. I couldn’t do anything except look at my feet.

White Guy Number Two, who’d just been promoted to White Guy Number One, puffed his chest out, and said, “I’m Arnold Bagini. I played D1 football at Notre Dame and came in third for two-hundred-twenty-five-pound reps at the NFL Scouting Combine.”

A blonde girl in front of us turned around, and said, “Bagini? Sounds like Bilbo Baggins from The Lord of the Rings!” Everyone erupted in laughter again, and someone yelled, “Frodo!” to which the whole room replied by chanting, “FRODO! FRODO! FRODO!”

But Arnold Bagini didn’t sweat. He just closed his eyes and nodded in different directions, like he was listening to music. Eventually, he opened his eyes, and shouted, “My name . . . is Frodo!” The whole room clapped in approval.

“Claire Vanderbilt,” the tall blonde girl sporting a white dress and brown leather belt said, straight-faced, with determination in her eyes. “I’m from Darien, Connecticut. And I’m a Vanderbilt.”

The room fell silent. Then someone shouted, “Dutchy!”

“No,” someone else said. “The Duchess!” Everyone nodded in agreement at Claire’s new name, and she nodded before taking a seat. “And you, Buck,” Rhett said. “Your name is already Buck, so what’s your fun fact?”

After being screamed at, then witnessing what happened to the original White Guy Number One, I tried to think of something good but couldn’t.

Everyone’s eyes widened. Including Rhett’s. “Well, go on,” he said. “Give us a demonstration.”

It’s not that I couldn’t, but I didn’t want to start my career, especially as the only black person in the room, as some wind-up monkey that would bang his cymbals whenever white people wanted him to.

Sensing my hesitation, they all flung a series of boos at me as if they were throwing rotten apples, peanuts, and other circus trash.

“Buck, Buck, Buck,” everyone whispered, raising the volume until they were screaming. “BUCK, BUCK, BUCK!”

“He’s going to choke like B-Rabbit in 8 Mile!” someone shouted. Fuck. There was no time to weigh the costs of being Flavor Flav versus the benefits of being Jesse Jackson. I’d already made a fool out of myself, and I couldn’t let it happen again. Thank God I wasn’t dressed like a Mormon. I took a breath and opened my mouth. “Aight I’m really sorry, for doin’ that thing you hate. I’m sayin’ comin’ in with excuses, jus’ a li’l late. Got two hundred and ten eyes on me, and nah, it don’ feel great, but it’s sure better than that guy who ran out barfin’ what he ate. It’s true I may be new, but I promise I got potential. Words and verbs coalescing into proverbs comin’ straight up at your mental. It’s my first day, but if there’s one thing I can say, it’s that my man Frodo, the Duchess, and me are gon’ kill it, like a turkey on Thanksgivin’ Day.”

If you are a black man, the key to any white person’s heart is the ability to shuck, jive, or freestyle.

Silence. All two hundred and ten eyes stared at me. “Holy shit,” a girl said. “Buck can actually rap!”

The room thundered with applause, pale hands surrounding me for high fives.

Across the room, Rhett gave me a look that said, There he is.

There’s the guy I hired.

Reader: If you are a black man, the key to any white person’s heart is the ability to shuck, jive, or freestyle. But use it wisely and sparingly. Otherwise you’re liable to turn into Steve Harvey.

You can design the next Brooklyn Public Library card (and get $2,000). 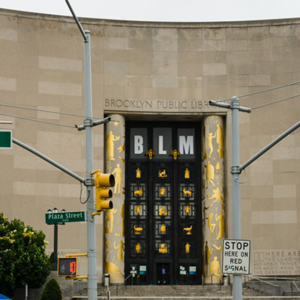