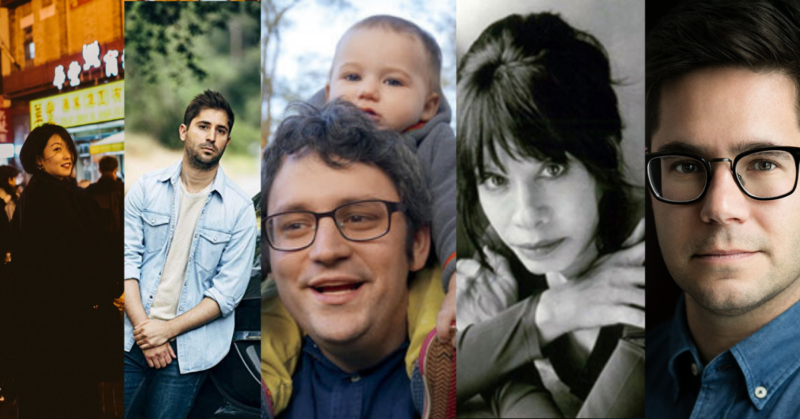 Ryan Chapman (Riots I Have Known)

Xuan Juliana Wang: It’s like attending a dinner party full of interesting strangers, some of them beautiful, others not, some are kind and secretly broken. One of them only speaks a foreign language, but that’s the one you somehow talk to all night.

Jayson Greene: The impossibility and the necessity of hope.

Ryan Chapman: You’re watching the most beautiful sunset you’ve ever seen, it’s stopped you in your tracks, and for a moment you think, Have I ever watched a sunset? You’ve seen thousands, tens of thousands, but somehow this one feels like the first. The great red disc has now dipped halfway into the horizon, it’s all ending too quickly, and yet this makes the sunset even more beautiful. Then you notice someone familiar walking by, oblivious to the stunning tableau. It’s him, the most despised person at the office, a supremely annoying individual built in a lab to suck the life out of your 9-to-5. He slips on a banana peel. As he falls, terror-stricken, you both lock eyes.

Binnie Kirshenbaum: The dark side of the mind. Profound loss. Despair. The absurdities of life. The psych ward.

Adam Popescu: East vs. West, tradition vs. modern life and technology, our changing climate and way of life, growing up, human nature. Most of all it’s about choice and the price we pay for making those choices. I wanted to show a world we’ve all heard about but few of us have seen. It’s beautiful on a screen or in a picture but on the ground, on the mountain, it can be brutal and so cruel.

Jayson Greene: Greta’s hair. Greta’s smile. Greta’s eyes. My wife’s hair. My wife’s smile. My wife’s eyes. Burning pain in my chest that I was certain would kill me, but did not. My son. His smile. His hair. His eyes.

Adam Popescu: Nepal and Ladakh and the Himalayas, my love of travel and story and the mystery of exploring character. Most of all the biggest influence or overarching theme was my attempt of depicting a very obscure, specific place that has universal appeal despite its location and character and themes. That’s what I was going for.

Binnie Kirshenbaum: Medication, psychoanalysis, the weather, and an unreasonable number of deaths of loved ones in a short span of time.

Xuan Juliana Wang: The photography of Ren Hang and Ryan Mcginley. Attending academic lectures on architecture and failing a computer science course. Trying on clothes in faraway places. Listening to the College Dropout in my first car and re-watching all of the dance scenes in Lou Ye’s films.

Xuan Juliana Wang: I don’t despise this word at all but “Chinese” feels like the most-used description in reviews of my book. Yes, the characters are Chinese, but I don’t believe that their race or nationality is the most important or interesting quality about them.

Adam Popescu: The best back-handed compliment is when people say they like my work—a story about a young ethnic Sherpa—despite the fact that it’s written by a Westerner and a man. If I can inhabit the world of a Nepali woman, and have readers care about her, then I’m happy.

Jayson Greene: I don’t despise any words anyone has used to describe my book.

Ryan Chapman: I’ve been lucky so far, and I’ve been warned against reading my Goodreads reviews. Still waiting on “total fraud.”

Adam Popescu: A firefighter, EMS, doctor, field biologist. All are unsung everyday heroes. I think I could have had a good run with those and a few that I’d rather not advertise. I still flirt with the firefighter idea, something I’ve never told anyone. The rest are just romantic.

Binnie Kirshenbaum: Definitely a naturalist. Animal behavior fascinates me. Including insects. Or, possibly I’d be a cat rescue lady.

Binnie Kirshenbaum: Strong suits: a distinctly comic, yet tragic, voice, sharp sentences, punchy word choices, and strong characterization; also handy with a metaphor. But not so hot with plots and transitions, and I use “but,” “yet,” and “also” far too often.

Ryan Chapman: I believe I have some talent with first-person voice. I will always envy writers who can describe landscape and weather in ways that feel true and unadorned. Andrew Sean Greer and Cormac McCarthy come to mind.

Jayson Greene: I think I can describe and evoke emotional states; writing dialogue, for me, feels like shooting myself in the face with a t-shirt cannon.

Adam Popescu: Details. Making the jump from journalism to fiction isn’t a straight line, that’s why so many journalists stick to nonfiction. It makes more sense. It’s also stifling—narrative journalism only has so much room for creativity—and most publications want you to match their voice, not build your own. But being a full-time reporter has given me an eye for detail, for research and seeing how people really live, how the world really works, and I think, I hope, that’s translated into my fiction. What would I like to do better? Too many things to reveal here.

Ryan Chapman: Males raised in the United States are told from a young age the world is interested in their every thought and utterance. This has led to numerous problems, of course. With specific regard to my novel: We have 50,000 thoughts per day, and Riots is composed of several years’ worth of my two or three best daily thoughts. I hope that’s worth something.

Binnie Kirshenbaum: That’s very funny. If I had the hubris to think anyone would have an interest in what I write, I’d have some self-esteem and wouldn’t shake like a Chihuahua.

Adam Popescu: Writing a novel means you’re not modest, not really, or else you’d be doing something else. Writers are quietly loud—they lay it on the page and expect the world to watch and read even in an era when so few do. Contending with Netflix and Instagram and everything else, that’s the real battle. And if you’re prepping to fight that war, then you better believe inside (even if you don’t ever say it out loud) that what you have to give on the page is special in a way that no one else can express. Maybe you’re wrong, you probably are, but if you don’t believe it, your readers never will.

Xuan Juliana Wang: If I didn’t think they needed to hear me, I wouldn’t have said anything.

Jayson Greene: A question ripped straight from my own inner voice! Hello, inner voice, nice to find you here. The answer changes from day to day, from project to project, but I always have to find some kind of answer. This time around, I feel a lot of solace in the fact that a lot of it doesn’t have to do with me, but in fact comes from my Greta. I am her father, and therefore the one who has to tell her story.

On Founding One of Literature's Most Beautiful Collections

Birthing Calfs, Writing Novels: This is My Job Now 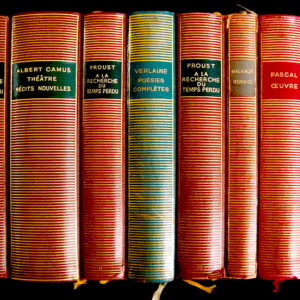 On Founding One of Literature's Most Beautiful Collections

The Pléiade. The name resonates far beyond the world of literary history. The Pléiade collection is truly part of French...
© LitHub
Back to top