Bigger Than Watergate? 10 Essential Books About Our Future Past

Those Who Forget the Past Are [something something]

So: in case you haven’t heard, in the year leading up to his election as our evil overlord, Donald Trump’s campaign was in contact with senior Russian intelligence officials. Our own intelligence officials, of course, have already said definitively that Russia at least tried to help Trump win. It’s funny to type that like it’s nothing, but that’s where we are right now. Also, there’s Michael Flynn. All of a sudden, it seems that we are in the middle of an historically massive scandal that should—and, fingers-crossed, may—bring down this presidency, unfolding in real-time around us. It’s such a big deal that legendary journalist Dan Rather has already used the W-word, posting to Facebook just a few days ago: “Watergate is the biggest political scandal of my lifetime, until maybe now. It was the closest we came to a debilitating Constitutional crisis, until maybe now… And we may look back and see, in the end, that [the Russia scandal] is at least as big as Watergate. It may become the measure by which all future scandals are judged. It has all the necessary ingredients, and that is chilling.”

And he’s not the only one. Yesterday in the New York Times, Nixon expert Tim Weiner, author of One Man Against the World: The Tragedy of Richard Nixon, among other things, reminded us:

The road to Watergate and the resignation of Richard Nixon began in April 1969, three months after his inauguration, when the president ordered Mr. Kissinger to wiretap members of his own staff in an effort to stop embarrassing leaks of secret information. One thing led to another until the commander in chief was athwart the Constitution.

It’s been barely three weeks since the Trump team took office, and a distinct aroma has started wafting out of Washington, what Mr. Kissinger is said to have called “the odious smell of truth.”

My nostrils are waiting. In the meantime, a list of ten essential books on Watergate—aside from Weiner’s, which you should also read. Consider these your own personal set of crystal balls—they may not tell the future precisely, but they’re certainly full of clues. And possibly strategies. 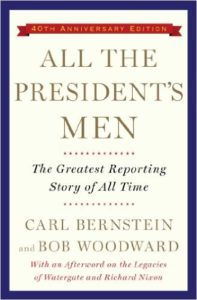 Bob Woodward and Carl Bernstein, All the President’s Men

In many ways, this is the ur-Watergate book, because it’s super famous (it spawned a movie after all, not to mention a generation of journalists) and because it’s as much about journalism as it is about the actual scandal—the former, of course, being inextricably tied to the latter. Using the the two journalists’ articles for The Washington Post as a jumping off point, the book traces the whole complex investigation from Woodward’s first reports to his meetings with Deep Throat. It was published only a few months before Nixon resigned—as TIME put it, this is “the work that brought down a  presidency.” I hope someone is getting to work on something similar as we speak. 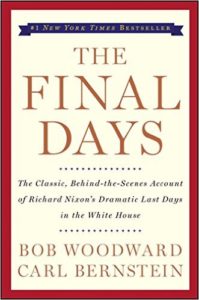 If you are frustrated by the fact that All the President’s Men ends before Nixon’s resignation, this second volume by Woodward and Bernstein covers, well, the final days. Possible wish-fulfillment reading for the weeks ahead? 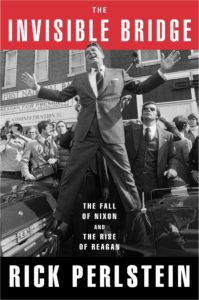 Rick Perlstein, The Invisible Bridge: The Fall of Nixon and the Rise of Reagan

This book is bigger than just Watergate, investigating the state of America’s social, cultural, and political systems in the years between 1973 and 1976—but that seems like the only way to really dig into what happened. Perlstein frames Watergate as “a battle over the meaning of America”—that is, who is the true patriot? The citizen who supports the president or the citizen who critiques the “alarmingly high percentage of Americans more than willing to tolerate lawlessness as long as it is conducted in the name of ‘Americanism’ or even ‘law and order'”? I shouldn’t have to tell you how relevant this question is today. 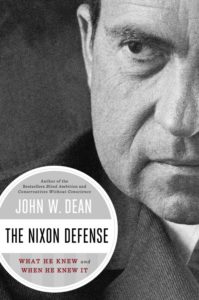 John W. Dean, The Nixon Defense: What He Knew and When He Knew It

Former White House Counsel (he served from 1970 to 1973) John W. Dean went to prison for his part in the Watergate cover-up. This book, it seems, is part of his atonement—a painstaking, day-by-day account of what was on all of those tapes—over 1,000 hours of them, many of which had been heard by almost no one. In a 2014 review of the book, Robert Dallek wrote: “Nothing has contributed more to current American cynicism about politics and politicians than Watergate or Nixon’s betrayal of the public trust that cost him the presidency. Tapes revealing his appalling vulgarity in response to anyone he considered an enemy have permanently tarnished the presidency… It should also serve as a renewed cautionary tale about elevating politicians with questionable character to high office.” Alas, if only we listened. 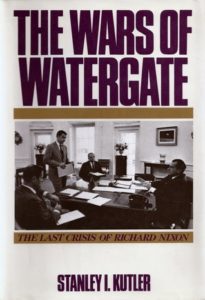 Stanley I. Kutler, The Wars of Watergate: The Last Crisis of Richard Nixon

A little historical reading for you. This is the first major book about Watergate by an historian, and a valuable resource—though admittedly spotty in parts. 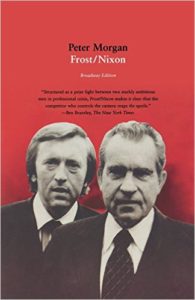 Morgan’s 2006 play is based on the exclusive televised interviews Nixon granted to English journalist David Frost in 1977—but of course, it’s fictional, or at least it’s a semi-fictional interpretation. You might follow up the play with Morgan’s Frost/Nixon: Behind the Scenes of the Nixon Interviews—and hell, perhaps the movie, if you’re still feeling unsatisfied/awake. 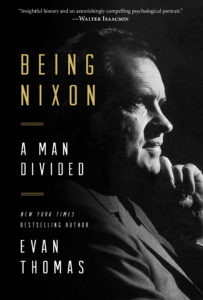 To truly understand Watergate, you have to understand Nixon—which Thomas attempts to do in this bestselling biography, to varying results. Perhaps he can never really be known. But despite the book’s unevenness, or, as Janet Maslin suggests, because of it, the biography invites further thought, discussion, and analysis—which are likely to lead to useful places. 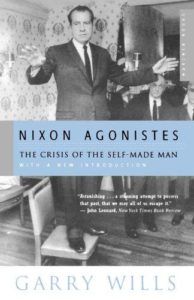 Gary Wills, Nixon Agonistes: The Crisis of the Self-Made Man

This is not a Watergate book. In fact, it was published in 1970, well before the first break-in. But therein lies its value: for the vision of Nixon pre-scandal, as a complicated leader, and, as Wills suggest, a secret liberal. A classic. 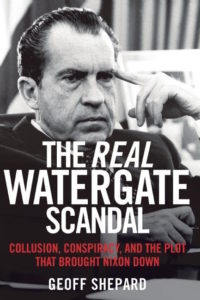 Geoff Shepard, The Real Watergate Scandal: Collusion, Conspiracy, and the Plot That Brought Nixon Down

If your response to Watergate is something along the lines of “Nixon! Great President! Treated SO UNFAIRLY by FAKE NEWS”—or if you are interested in the argument of those for whom this response seems reasonable, this book, which asserts that “the real Watergate scandal is how our Constitution and Bill of Rights were deliberately trashed in the successful effort to realign political power, drive President Nixon from office, and imprison his senior aides,” is for you. 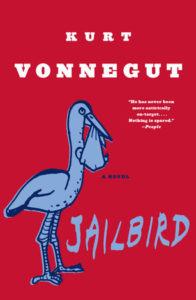 Now for something a little more—what’s the word, fun? Kurt Vonnegut’s Watergate novel, written from the perspective of one Walter F. Starbuck, who here was once Nixon’s special advisor on “youth affairs,” later to play the least of roles in the Watergate scandal and be thrown into jail with his “co-conspirators.” All the actual events take place after Starbuck gets out of jail, but Vonnegut’s distinctive blend of history and fiction is always a source of pleasure, in my book. 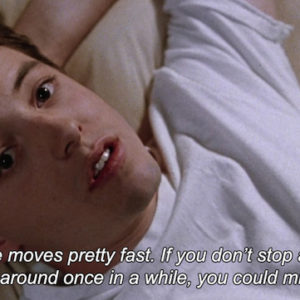 When I was a tween, I started collecting aphorisms, though of course I didn’t know what “aphorism” meant back then....
© LitHub
Back to top
Loading Comments...