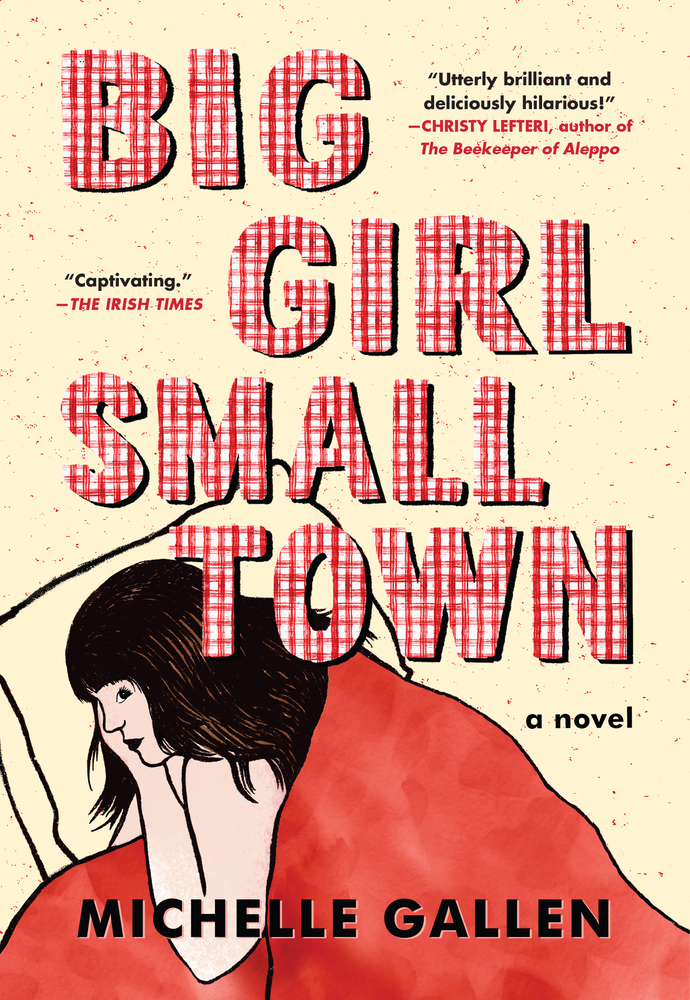 The following is excerpted from Michelle Gallen's debut novel, Big Girl, Small Town, about a young woman who grew up during the Troubles. Gallen was born in County Tyrone in the mid 1970s and won several prestigious prizes as a young writer. Following a devastating brain injury in her midtwenties, she co-founded three award-winning companies and won international recognition for digital innovation. She lives in Dublin.

Majella’s estate was silent. She let herself into the house and walked quietly to the kitchen. She closed her eyes before flicking the light switch. The bulb stuttered, then hummed into a harsh glare. Majella didn’t understand why people used fluorescent lights. No matter where they were used, they over-lit rooms, making everything hurt. She shivered. Her ma had let the fire go out and not bothered about the heating. Majella set her food down on the counter and walked into the living room. QVC was chittering away, offering her snoring ma a ring with fabulous simulated semi-precious stones in gold-dipped claw settings for less than half retail price. The light flickered around the living room, reminding Majella of Christmas years ago, when she was allowed to sit up later than normal to watch a movie. The only other thing they’d watched as a family was Dallas. It had been on every Saturday night for what felt like decades. After her bath, she’d kneel down to say her prayers beside her daddy, their backs to the telly. Majella would be damp and warm in her nightie with the sleepy-eyed bears on it. She could always tell when Dallas was drawing close, as her daddy’d start to race through the last of the prayers.

On the Amen, her da would hit the volume control on the remote with his left hand, while blessing himself with his right hand, and the Dallas theme tune would burst into their living room.

For years afterwards, Majella could hear the theme tune every time she said her prayers, and could see J. R. Ewing’s bright white teeth bared in a smile, the shine from his moist, alcoholic eyes, and she felt his searing disdain for most folks, but especially Barnes, who just got dumber and dumber every day. Majella realized that her fish and chips were getting cold. She went back to the kitchen, grabbed her plate from her cupboard and dumped the package on it. She tore the paper open and breathed in the sharp vinegary steam that rose up around her. She tasted a chip. It was lukewarm, so she shoved the plate into the microwave and hit the MIN button. She listened to the telly offer her snoring ma a diamonique, faux-titanium choker necklace while she followed the microwave countdown, opening the door just before the bell pinged. She got her timing from her da. He always caught glasses before they hit the floor, her ma before she passed out. He’d even once claimed to have caught a falling piano, when he was working in America. And Majella had believed him. She’d been really gullible as a child. Her da’d taken advantage, filling her head with lies and notions and stories that she’d repeated to teachers or other weans, only to be laughed at. He’d once told her that bald men lost their hair as a punishment from God for wearing ladies’ knickers in bed. It had taken Majella years to understand why Baldy Bradley had gone mental on her when she’d told the class she knew he wore ladies’ knickers. Majella grabbed the red sauce and squirted a farty squelch of it over her chips, then shook more vinegar and salt over the whole lot. She tucked the two-liter bottle of Coke under her oxter and picked up her plate. On her way past the living room she looked in at her mother. Majella considered throwing a blanket over her ma. But she knew there’d be a risk of waking her and having to hoosh her up the stairs to her bed, so she left her to it.

On the Amen, her da would hit the volume control on the remote with his left hand, while blessing himself with his right hand, and the Dallas theme tune would burst into their living room.

Majella locked her bedroom door, plugged in the fan heater, and then climbed into bed to eat. She liked to believe that if she lived on her own the house would be different. Cleaner. With sparkling windows. She’d have plump cushions that you could sink into instead of the foam things they had, squished flat as pancakes from years of arses. She’d pull out the fluorescent lights, tear off the wood-chip wallpaper and rip out the swirly eighties carpets. She’d paint the walls magnolia and varnish the floorboards. Majella’s room hadn’t been done up since the time her ma’d stopped eating for what seemed like months. She’d gone so thin that there was talk of her being sent to the T&F. The T&F wasn’t like a normal hospital, where you were sent for broken bones and to have bits of you cut out. It was a special sort of hospital for people who were bad with their nerves. Nobody who went there seemed to get well. They just disappeared for a while, then came back like zombies.

When her ma heard the talk about the T&F, she started to drink the banana-flavored nutrition shakes that Majella’s da had bought. Majella remembered him spooning the powder out of a tin, like baby formula. Then he added milk and beat it with a fork until it looked fluffy and sweet, like the American milkshakes Majella had seen on the telly. But it had tasted like wet, perfumed chalk. Majella didn’t know how her ma could prefer that shite to the real dinners her da cooked. Years later, when Majella first tasted a banana-flavored condom, she’d been reminded of her mother’s health drinks, and that special trip they’d taken to celebrate her eating again. Her da had driven them and her granny to Omagh and they visited Harry Corry to get Majella a treat. The four of them had walked around eyeing the matching curtain and duvet sets. That had been the big new thing back then: matching shit. You could match your curtains with your duvet with your pillowcases with your scatter cushions with your lamp shade with your wallpaper with your wallpaper border with your rug with your bin. You weren’t supposed to just buy a pillowcase or a duvet cover anymore—it had to be a whole room. But they couldn’t afford all that. Majella was told to choose curtains and a duvet cover. But Majella’s granny didn’t approve of the red duvet cover she chose.

Get the cuddy something plain so ye get good washing out of it.

They drove home from Harry Corry’s with a basic cream duvet and matching curtains. Majella hoped she could choose the carpet. But her da measured her room and went down on his own to Hector’s Hardware and Household Goods and took the remnant that was the best fit. After her da nailed the carpet down, the room felt warmer and sounds from downstairs were muffled. But Majella hated the way the carpet scratched her knees and the swirls snagged on her eyes. The duvet cover was eventually ripped to dusters after thinning out in the wash. The curtains still hung there, skimming the warmth from the light outside.

She lay back and closed her eyes, sucking on her finger. She tasted the sting of the salt crystals and the chip grease under her nails melting in the heat of her mouth.

Majella crushed several mashed chips into her mouth. When Majella was eleven, she’d weighed more than her ma. She guessed she weighed about twice her ma now—she wasn’t sure as she didn’t let her ma push her onto the scales every week anymore. Her size didn’t bother her. Didn’t bother any of the men she met in the pub. And she seemed to have settled now. Not getting much bigger or smaller even when she ate less. Majella had reached the bottom of the pack, where the chips and fish were mushed up together. This was her favorite bit, with the salt and vinegar thick on each mouthful. She paused to sigh in contentment. Then she scraped at the paper with her fingers, before ramming wads of food into her mouth. Chip fat coated her fingers and smeared around her mouth. She dropped the plate on the carpet and lay back on the bed, wiping her fingers and mouth clean on a handful of napkins. It felt good lying there, the heater blowing hot air around the room, her belly, eyelids and diddies heavy and warm. She stretched out her hand and checked her mobile phone.

She lay back and closed her eyes, sucking on her finger. She tasted the sting of the salt crystals and the chip grease under her nails melting in the heat of her mouth. For a few minutes Majella sucked, then she took her finger out of her mouth and moved her hand down inside her jogging bottoms. She closed her thighs around her hand, her fingers kneading between her legs. As her breathing quickened, she stretched her legs long and taut until she felt the waves of heat surge up and down her entire body. Afterwards she lay still, her hand clamped between her legs, feeling the pulse of her heart beating through her pubic hair. When her heartbeat had slowed to its usual steady thump thump-thump she brought her hand to her nose and sniffed. She slipped her finger back into her mouth, wondering if there was a man in another house, maybe not a thousand miles from where she lived, lying awake trying to forget about what it felt like to break an elderly widow’s ribs with his fist.

An Interview with Shayna Small, Narrator of Overground Railroad by Lesa Cline-Ransome 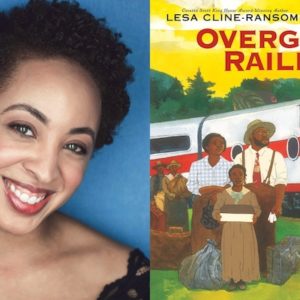 An Interview with Shayna Small, Narrator of Overground Railroad by Lesa Cline-Ransome Every Monday through Friday, AudioFile’s editors recommend the best in audiobook listening. We keep our daily episodes...
© LitHub
Back to top